Why some Iraqi Shiites are pushing for distance from Iran

Iraqi Shiites are dividing over their stance toward Iran, as the disagreement with Iran rose up among Shiites affiliated to Najaf. 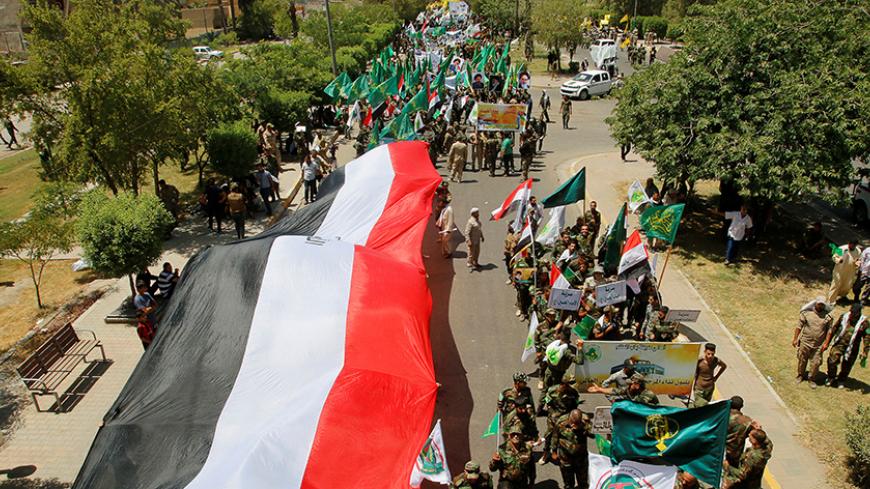 Iraqi Shiite Muslims from the Popular Mobilization Units march along a street holding a giant Iraqi flag, during a parade marking the annual al-Quds Day (Jerusalem Day) during the Muslim holy month of Ramadan in Baghdad, July 1, 2016. - REUTERS/Khalid al Mousily

NAJAF, Iraq — Iraq’s Shiites are witnessing a political-religious rift in their stance toward Iran whose development can be traced back to 2003. While some express complete loyalty to the Shiite political regime in Tehran, others object to its regional policies, including toward Iraq, and distance from it.

In one example, the predominantly Shiite Popular Mobilization Units (PMU) held a military parade July 1 in Basra. They destroyed US and Israeli flags and burned photos of Saudi King Salman bin Abdul-Aziz Al Saud. The march sparked criticism and anger among some Shiites, because the United States has friendly relations with Iraq and is supporting its security forces in their war against the Islamic State (IS). Also, given the state competition in the region, hostility toward Saudi Arabia is not in Iraq’s interest.

In a related development, differing attitudes could be detected surrounding the demonstrations on International Quds Day, July 1, essentially reflecting the debate over whether Iraqi Shiites should be affiliated with Iran or pursue interests and priorities different from those of the Tehran government. At Quds Day protests organized by the PMU faction Asa’ib Ahl al-Haq in Najaf, a religious hub for Shiite clerics, there was no marked presence of clerics. In contrast, in Qom, Najaf’s religious competitor that receives funding from Iran, a remarkable number of clerics attended the annual protest. Jihad al-Asadi, an instructor in the religious seminary at Najaf, told Al-Monitor, “The Najaf seminary does not support any political agenda outside Iraqi national interests.”

On July 2, Interior Minister Mohammed al-Ghabban issued an order referring “several officers and policemen from the Basra police to an investigative council and implementation of the sanctions cited in the Penal Code of the Internal Security Forces” for their participation in the Quds Day protests because of its political nature.

Following the July 3 bombing at the Karrada market, in a predominantly Shiite area of Baghdad, that killed more than 300 people, Shiite activists criticized some Shiites for supposedly having more enthusiasm for International Quds Day than concern about the bomb attack, which produced the highest death toll in the country since the Iraqi invasion. Among those holding such a view is Khudeir Fleih al-Zeidi, an Iraqi author and novelist from Nasiriyah, who told Al-Monitor, “Those who celebrated the International Quds Day did not mourn the victims of the attacks. The question is easy: Karrada or Jerusalem?”

In an interview with Al-Monitor, Naqaa al-Tamimi, a veterinarian who pursued her studies in Iran, said, “Why don’t Iranians show solidarity with our plight like the Karrada attack, knowing that we have the same confession, and we welcome them warmly on several yearly religious occasions?”

On July 4, apparently pro-Iranian Shiite militias, taking advantage of attention being focused on the aftermath of the Karrada attack, shelled Camp Liberty, where members of the Mujahedeen-e Khalq, an Iranian opposition movement, are housed. The shells also landed in a nearby, predominantly Sunni refugee camp, perhaps by accident, killing three people and injuring 11 others. A prominent cleric from Najaf told Al-Monitor on condition of anonymity, “Some armed Shiite groups are only interested in abiding by Iranian orders. Why would Iraq shell the Liberty Camp and kill innocent Iraqis even if by mistake?”

As can be gleaned from the clerics remarks, the armed Shiite factions are themselves divided on loyalty to Iran. Al-Aalem al-Jadeed newspaper published what appeared to be an official response from Prime Minister Haider al-Abadi on the matter of a letter from the leader of Liwa’ Ansar al-Marja’iya informing Abadi that Abu Mehdi al-Muhandis, the deputy chairman of the PMU, and reportedly Iran’s most powerful military man in Iraq, had stopped distributing government salaries to armed Shiite factions not connected to Iran. Abadi later ordered an investigation into the salary situation.

Most factions without relations to Iran — including Liwa’ Ansar al-Marja’iya, the Abbas Battle Group, Liwa’ Ali al-Akbar, the Imam Ali Troop and the Kadhimin Battle Group — are affiliated with the Shiite authority in Najaf, Grand Ayatollah Ali al-Sistani or Shiite holy shrines under Sistani’s supervision. Sajad al-Rabihi, a cleric fighting in the ranks of the Abbas Battle Group, confirmed the cutoff of salaries to Al-Monitor. The issue of divided loyalties, between Iran and Sistani followers, among the Shiite PMU militias had been identified earlier by the United States and appears now to have been confirmed by the salary cutoff.

Some observers believe the pro-Iran current within the PMU is trying to seize control and expel those not in line with Tehran from the movement. In addition to news of the salary cutoff, Hadi al-Amiri, the leader of the Badr Organization, which is close to Iran, and some other PMU militia leaders met with former Prime Minister Nouri al-Maliki on June 27. Amiri praised Maliki, saying, “The decision to form the Popular Mobilization Units was Maliki’s. He has strongly supported them since the beginning.”

Amiri’s statements angered clerics in Najaf, because they contradicted the reality that the militias comprising the PMU began forming after a call by Sistani on June 13, 2014, for Iraqis to take up arms in the wake of IS' capture of Mosul on June 10. Maliki's role consisted of his administration bringing the PMU under some sort of government supervision to coordinate action with the Iraqi national army.

Shiite cleric Muqtada al-Sadr, the leader of the Peace Battalion, one of the largest PMU factions, sarcastically dismissed Amir's statements, saying, “Maliki’s alleged Popular Mobilization Units, if they exist, do not represent me or Iraq,” highlighting the division in the organization.

The Iranian Fars News Agency published a news brief accompanied by an image of Maliki at his house welcoming Qasem Soleimani, the leader of the Iranian Quds Force, for iftar on June 29. Several PMU leaders were also invited. On July 3, Sky News Arabia, citing Iraqi sources, reported that Soleimani had allegedly proposed to Abadi that command of the PMU be given to Maliki. There were no corroborating reports of such a proposal having been made.

Ultimately, it seems, the Shiite division in Iraq revolves around how to organize relations with Iran in terms of pursuing Iranian agendas and building relations with Tehran based on mutual interests as well as Iraqi values and interests.