Iraq's Popular Mobilization Units are organizing a military parade on the seventh anniversary of their establishment as a show of strength, but it may also reveal their divisions. 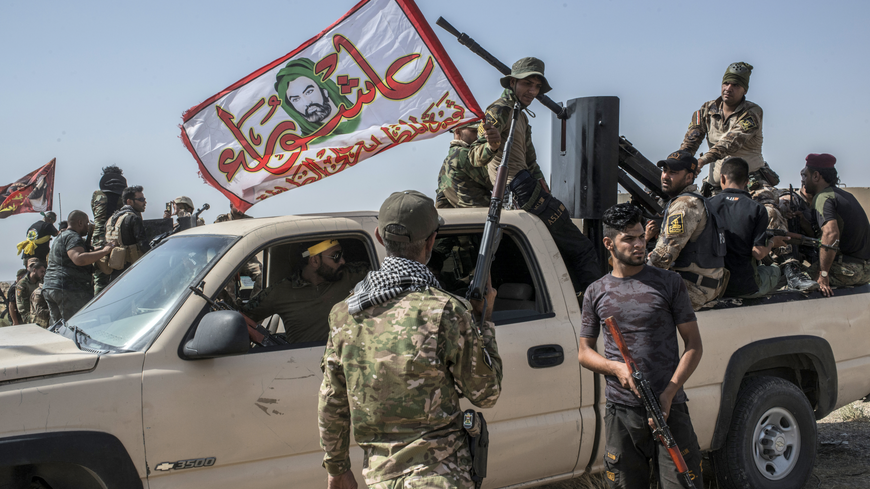 Soldiers of the Popular Mobilization Units (PMU) prepare to fight in an offensive to drive out Islamic State militants on Sept. 24, 2017, in Hawija, Iraq. The PMU is now planning a big military parade for June 25, 2021, in Diyala, that is to show off more modern military equipment. - Martyn Aim/Corbis via Getty Images

The Popular Mobilization Units (PMU) are gearing up for a huge military parade June 26 to mark the seventh anniversary of the state-affiliated military organization's founding.

The parade will be taking place following the arrest and release of PMU official Qassim Musleh.

Observers said the parade may be an attempt to cover up divisions within various militias in the PMU such as the pro-Iran factions and the Hashd al-Marjaiya grouping close to Shiite Grand Ayatollah Ali al-Sistani. In addition, there is a divide within the pro-Iran factions.

PMU sources told Al-Monitor that 20,000 fighters will take part in the parade, where new drones, missiles and armored vehicles will be displayed.

The sources said the Liwa Ansar al-Marjaiya and Firqat al-Imam Ali al-Qitaliyah militias decided to withdraw 36 hours prior to the parade on the advice of Hashd al-Marjaiya. The Peace Brigades, affiliated with Shiite cleric Muqtada al-Sadr, will not be part of the parade either.

Informed PMU sources told Al-Monitor that the parade will take place in Diyala province. “Kadhimi will attend the show at the invitation of the PMU assembly,” a PMU leader told Al-Monitor.

The Fatah Alliance, which is led by Hadi al-Amiri, who is a prominent PMU leader and co-founder, accused Kadhimi of preventing the PMU from holding the parade in Baghdad’s Great Celebrations square, which is why Diyala was chosen instead.

The parade is to take place at Camp Ashraf, which was the headquarters of Mujahedeen-e Khalq, which opposes the Iranian regime.

A Hashd al-Marjaiya leader told Al-Monitor on condition of anonymity, “We received an invitation to attend, but we apologized for not participating. We will not take part in any public forum or meeting with the top leaders, because we are against the way the PMU is managed.”

He added that any presence or participation by any member of the Hashd al-Marjaiya formation only would only represent that individual.

The military parade is seen as delivering a message that the PMU is a force that cannot be overlooked locally and regionally, and that there will be no new major political accords in Iraq without the PMU.

Ihsan al-Shammari, a political science professor at Baghdad University, told Al-Monitor, “The PMU’s central military parade at their founding anniversary aims to prove their strength, particularly since it is linked to the recent crisis in the Green Zone and security tension with the Iraqi government. Hence, the factions need to show off their strength, particularly since the deployment in the Green Zone decreased the support they had.”

He added that the armed parade will serve as a message to internal and external parties pushing for a restructuring of the PMU.

The message is that the PMU has become a parallel force to the Iraqi army and other security formations, contrary to what Iraqi Defense Minister Juma Inad had said.

The PMU has held intensive preparations for weeks for the parade, the first such major ceremonial event it has held. PMU leaders hope the parade will put the organization front and center again, after its image was shaken following Musleh’s arrest and accusations that it has poor combat capabilities.

The Iranian leadership does not seem enthusiastic about increasing pressure on the Iraqi government. There are signs that Tehran may not encourage the PMU to show off its strength, despite reports that Iranian-made heavy military equipment will be displayed in the parade.

While the media often directly covers the PMU, it has been reported that the press will not be present at the parade. Instead, the PMU's media directorate is to ensure content distribution to satellite media channels. Security reasons could be behind such an unprecedented measure.

Observers said the parade is designed to send two messages to Iraq's domestic audience. The first is to show the power of the PMU prior to elections planned for later this year, and the second is that the PMU has become stronger than the armed forces; the second message is directed to Kadhimi. Observers said the parade is also meant to send a regional message to the Gulf countries’ Peninsula Shield Force that there is a strong Shiite military force to contend with.