The Popular Mobilization Units are divided into two rival groups, with some wanting to join the Iraqi army and others wanting to remain independent. 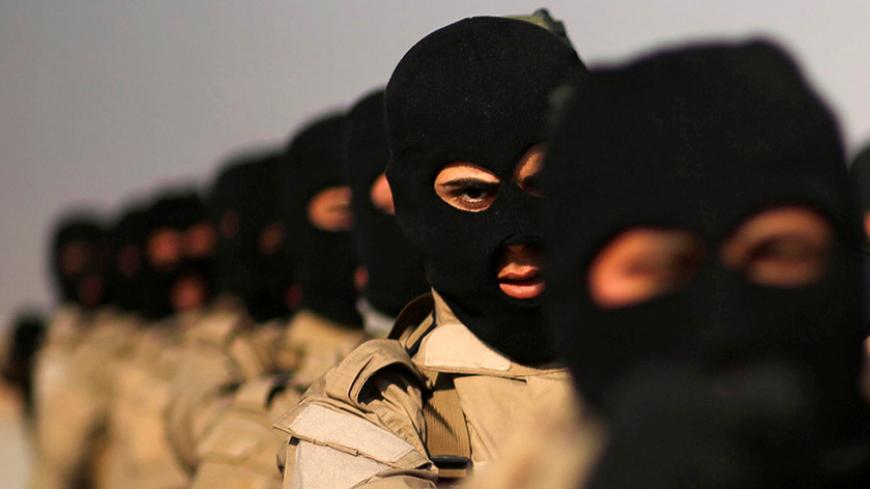 In a remarkable shift of events, the Iraqi Ministry of Defense added on July 20 a number of Al-Abbas Combat Division troops to its ranks following Prime Minister Haider al-Abadi’s approval, thus making the brigade the first Shiite faction in the Popular Mobilization Units (PMU) to partially join the Iraqi regular forces.

This step underscores the divergence in views and trends among the PMU Shiite factions, which have different viewpoints on the future of the PMU and its relationship with the Iraqi state. While some of them entrench their Iraqi orientation, others are keen to deepen their relations with Iran and be part of its regional plans.

Al-Abbas Combat Division was founded by Al-Abbas holy shrine under the patronage of Ahmad al-Safi, the secretary-general of the shrine and the spokesman for the supreme religious authority Ali al-Sistani. Other armed factions are affiliated with the Shiite holy shrines — such as Ansar al-Marjaiya Brigade, Ali Akbar Brigade and Imam Ali Combat Division — but Al-Abbas Combat Division has special military capabilities, as it consists of “four infantry brigades, an armored brigade, artillery battalions and a highly equipped special force trained by the Iraqi Counter Terrorism Service as well as an engineering and incursion squad,” according to the Tactical Cell, an Iraqi cell of experts that focuses on military and security issues in Iraq.

Al-Abbas Combat Division's media wing confirmed the news to Al-Monitor, providing a statement saying, “We have registered 1,000 fighters from the brigade at the Ministry of Defense after obtaining the approval of the commander in chief of the armed forces and the minister of defense.”

Some Shiite factions, such as the Shiite holy shrine factions affiliated with Sistani, are trying hard to ensure their affiliations are only Iraqi ones. In this context, the commander of Al-Abbas Combat Division, Maitham al-Zaidi, said that they have instructions not to meet with any non-Iraqi security figure.

The media wing's statement stressed that the move aims at strengthening the Iraqi regular forces and said, “The command of the brigade has specific goals and works toward a promising national defense project to boost the prestige of the Iraqi army and its security forces.”

Meanwhile, Saraya al-Salam is moving in a similar direction, and the commanders of this brigade emphasized the importance of strengthening the Iraqi military institutions. Saraya al-Salam is an armed faction affiliated with Muqtada al-Sadr, who has repeatedly warned against the dangers of Shiite factions undermining state institutions. In this regard, the Jihadi Commission of Saraya al-Salam decided to close the Sayyid al-Kunin Academy of Military Sciences on July 16 as “a first step toward strengthening the institutions of the Iraqi state,” according to the statement of the commission. The Sayyid al-Kunin Academy was providing followers of the Sadrist movement with military knowledge.

Commenting on the efforts of Saraya al-Salam to preserve the Iraqi identity of its forces, spokesman for the Sadrist movement Salah al-Obeidi said in a TV interview July 17, “We [Sayyid al-Kunin Academy] invested in purely Iraqi talents. … We did not send our members to foreign countries.”

Meanwhile, other Shiite factions do not see themselves as pure Iraqi groups, but seek to play a key role in the Iran-led “axis of resistance” all the while following Iran in its moves in the region. Senior commanders in such groups dominate the PMU, as they try to build a dogmatic ideological force parallel to the regular forces and similar to the Islamic Revolutionary Guard Corps (IRGC) in Iran.

In an effort to highlight its independent identity from the Iraqi forces and to confirm its proximity to the IRGC, a battalion from the PMU chose similar uniforms to the IRGC and opted for a march comparable to that of the IRGC in a July 15 military parade in Baghdad.

Commenting on this event, PMU spokesman Ahmed al-Asadi said July 22, “This is a message whereby the PMU is a new addition to the Iraqi armed forces."

"We are proud that in Iran there is the revolutionary force that has managed to defend the state and the Iranian revolution. We are also proud that the PMU has reached a level of strength, competence and training that can be compared to that of Iran's revolutionary force,” he added, in reference to the IRGC.

This trend, however, is not consistent with Sistani’s, who is reluctant to send his followers to Syria to fight. Sistani does not even recognize the PMU and considers fighters who are not affiliated with the Iraqi regular forces as volunteers. Sadr agrees with Sistani in this regard and he earlier ordered the expulsion of members who took part in the fighting in Syria.

The competition between these two trends is clear with regard to the future of the PMU and its affiliations. But the pro-Iran trend seems to have the upper hand given its control over the PMU budget and the continued support it receives from Iran. Moreover, supporters of this trend are planning to gain substantial political gains to proceed with their projects.

“A military victory without a political victory has no meaning and no value,” the secretary-general of Asaib Ahl al-Haq, a faction close to Iran, said on the third anniversary of the PMU founding in June. Meanwhile, Secretary-General of the Badr Organization Hadi al-Amiri enjoys broad public support, according to a poll published by the National Democratic Institute in June. Amiri is one of the closest PMU commanders to Iran, and he is a potential candidate for prime minister.

Therefore, the political conflict between the Sistani current and the current of Iran's Supreme Leader Ayatollah Ali Khamenei has expanded to include the security establishment at a time when developments seem to be leading to a possible confrontation between the two.