The electoral coalition of the Popular Mobilization Units has come under criticism from Iraqi's highest Shiite religious leader for invoking the group's military victories for electoral gain. 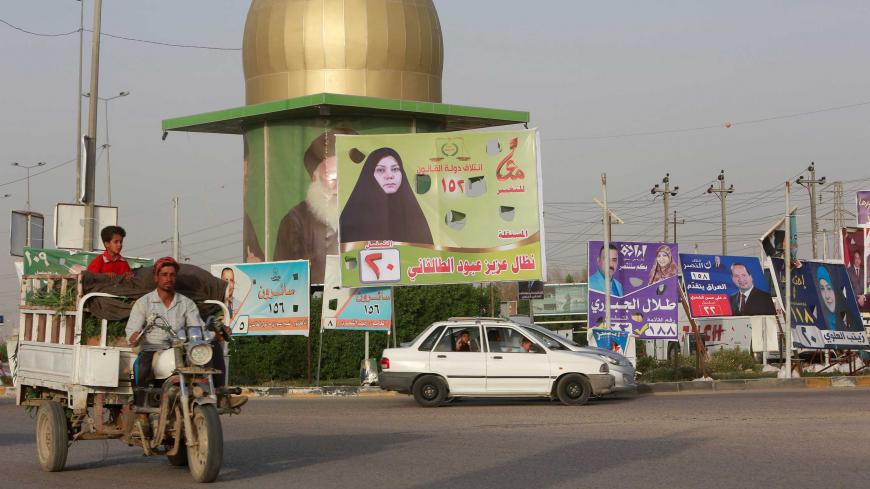 With Iraq's parliamentary elections around the corner, the different factions of the Popular Mobilization Units (PMU) grouped under the Fateh coalition banner face great challenges. These obstacles might eventually lead to internal divisions, decreasing the coalition’s chances of victory in the elections, to say the least.

On one level, Ayatollah Ali al-Sistani, the most influential religious and social leader in Shiite circles, opposes PMU participation in the elections, saying the organization’s name is being exploited for electoral gains.

Sistani’s office said in a May 4 statement, “No one is allowed to exploit the religious reference’s title or any other title dear to the hearts of Iraqis for electoral gains,” in reference to the PMU’s victories against the Islamic State (IS).

This is not the first time that Sistani has clearly opposed the PMU’s participation in elections. In his Friday sermon on April 27, Sistani spokesman Abdel Mehdi Karbalai affirmed Sistani’s position and his rejection of candidates who invoke victories against IS in the elections. The PMU was formed following Sistani's 2014 fatwa calling on Iraqis to join the security forces to stop IS after the terrorist organization occupied Mosul and moved toward Baghdad.

Karbalai, in a famous victory speech in December celebrating the downfall of IS, asked the PMU factions to stand back from politics, saying, “Most of those who participated in the jihad fatwa over the past few years did not take part for any worldly gains or rise in position. … It is important to preserve [these victories'] status and reputation by not using them for political gains.”

Iraqi Prime Minister Haider al-Abadi currently heads the Nasr coalition, Fateh's biggest competitor. In a May 4 statement, Abadi praised Sistani's position opposing the PMU's participation in the election. The prime minister said, “We express our complete support for the messages and directives given by the high religious reference, Sayed Ali al-Sistani, during this Friday sermon. From this same platform, stances have been expressed that have maintained Iraq’s unity and its people’s interests and declared the jihad fatwa against IS.”

In a statement to the Asharq al-Awsat newspaper, parliament member Jabbar al-Abadi, who is close to the prime minister and is a candidate for the Nasr coalition, said, “Sistani’s statements have benefited the Nasr coalition by expressing that the PMU’s name must not be exploited. They are against the Fateh coalition. The statements also expressed that those who were responsible for corruption and squandering public funds must not be elected. That was a statement against the State of Law Coalition headed by [former Prime Minister] Nouri al-Maliki.”

Fateh and the State of Law Coalition are expected to try to reach an alliance after the elections in an attempt to block Abadi from returning as prime minister.

The Fateh coalition declared its compliance with “everything issued by the reference,” said Naim al-Aboudi, a spokesman for Asaib Ahl al-Haq, which is also part of the Fateh coalition. However, it made no move to stop its electoral campaign based on its role in fighting IS under the PMU name.

The Fateh list is also facing strong opposition from certain PMU factions. Among the various major players, only the Badr Organization, Asaib Ahl al-Haq, the Hezbollah Brigades and the Imam Ali Battalions joined the list. All these factions are aligned with Iran. Some factions close to Sistani, such as al-Abbas Brigade, clearly spurned the Fateh coalition in compliance with his decision.

Muqtada al-Sadr, head of the Sadrist movement and leader of one of the largest factions under the PMU, Saraya al-Salam, took a stance similar to Sistani’s, saying, “Exploiting the PMU’s name in the elections is not only [politically] forbidden but also religiously haram.”

In another indication of the internal PMU conflicts plaguing the Fateh List, PMU leader and financial director Qassem al-Zubaidi was assassinated April 29, shot and killed by unknown assailants. Abadi accused “corrupt” PMU leaders of being involved in the assassination. He said that they will not scare him and that the incident will not obstruct his path toward reforming the PMU.

Following these incidents, Lebanese Hezbollah leader Mohammad Kawtharani visited Baghdad on April 30 to meet with the PMU leaders and Maliki in response to Sistani and Sadr’s harsh statements against the PMU’s participation in the elections.

All these developments can only undermine Fateh's chances and work in favor of Abadi, who is fighting tooth and nail with the list led by Hadi al-Amiri, who wants to be prime minister, and with the State of Law Coalition led by Maliki, Abadi's longtime rival.