An electoral coalition formed by some pro-Iranian Shiite Popular Mobilization Units is confident it can secure enough seats in parliament to form a majority and claim the premiership. 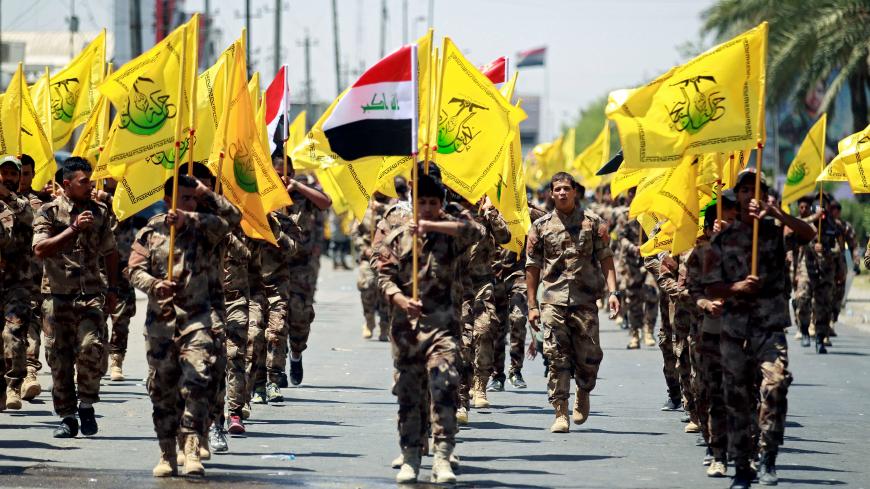 Baghdad is in the midst of an electoral campaign, with nearly two weeks remaining before the Iraqi parliamentary elections on May 12. Large posters of candidates line the streets of the capital, alongside pictures of members of the Iraqi armed forces and of Popular Mobilization Units (PMU) forces killed in the fight against the Islamic State (IS).

Prominent figures of the PMU, also known as Hashid Shaabi, allied in the Fateh (Conquest) coalition are at the forefront of the race, bolstered by the organization's role in the victory over IS in December 2017. In a conversation with Al-Monitor, Naim al-Aboudi, the spokesman for PMU Asaib Ahl al-Haq (League of the Righteous), discussed the elections and the evolution of the group in the wake of the fight against IS.

Aboudi seems unfazed by the upheaval in the Asaib Ahl al-Haq headquarters in Baghdad. “The elections are attracting a lot of attention — whether locally, regionally or internationally — because they will create the base for a new phase of state-building and reconstruction. The 2018 elections are very different from the 2014 or 2010 elections because we are in the phase of victory over IS. There is popular trust in terms of the state's effort to stabilize security, although there are some problems linked to the economic and services sectors. There will not be a big difference between large leading coalitions [during the polls], but we believe that we [Fateh] will be competing with the Nasr coalition [headed by current Prime Minister Haider al-Abadi] for a majority of seats [in parliament],” said Aboudi, who pointed out that Asaib Ahl al-Haq supports candidates who are running in most of the country’s various regions, with the exception of Anbar province and northern Iraq.

The Fateh coalition currently supports the election of Hadi al-Amiri, the head of the Badr Organization, to the premiership. After delegates are elected to parliament, they in turn will elect the Iraqi president and prime minister. “Our first choice is Mujaheed Sayed Amiri," Aboudi said, using an Arabic honorific title to refer to Amiri when asked if the PMU would support the candidacy of Abadi. "It is nonetheless too early to say who would be our second choice.”

Abadi, who took over the premiership in 2014, is credited with rebuilding the army and defeating IS. In January, Abadi announced he would stand for re-election as the head of the Nasr cross-sectarian bloc, which included members of the PMU for a few hours before they broke away and formed Fateh.

However, a source from the Fateh coalition told Al-Monitor on condition of anonymity that Iranian Quds commander Qasem Soleimani had reached an agreement with the Fateh coalition and the Kurdistan Democratic Party to not support Abadi for the position of prime minister.

The PMU leaders’ confidence in securing a parliamentarian majority stems from the organization’s increased popularity after the war on IS. The PMU was formed in 2014 by then-Prime Minister Nouri al-Maliki after IS’ capture of Mosul and after a fatwa by Grand Ayatollah Ali al-Sistani, Iraq's most prominent Shiite figure, who called at the time for Iraqis to volunteer in the fight against terror.

According to Aboudi, Asaib Ahl al-Haq lost over 700 of its fighters in the war against IS. He noted that since 2014, Asaib Ahl al-Haq trained new PMU members and offered its experience in the fields of engineering and counter-improvised explosive device training.

The political organization, which started as a militant group fighting the US occupation of Iraq, has morphed into a large network that includes a social outreach program. “We are building schools and universities as we see the importance of creating a religious culture and more awareness among people," Aboudi said.

The war on IS and its heavy death toll have also pushed the militant group to bolster its martyrs’ program. “Asaib Ahl al-Haq leaders decided that every martyr family should have a house or a piece of land to build a home. We have succeeded [in this endeavor], and we will be reaching this goal by the end of the year,” he added.

Another byproduct of the war on IS has been the realization by Asaib Ahl al-Haq of the important role Iraqi women play in nurturing a culture of martyrdom. “We are currently developing a social and political program and major projects targeting women. Unlike Lebanon, we did not have a culture of martyrdom, given wars launched by [President] Saddam Hussein were very unpopular and were deemed futile because of his destructive policies," said Aboudi.

He underlined the prominent role played by women in the war on IS. “Men who fought against IS were driven by religious belief and a feeling of nationalism, and the role of mothers in that regard was very instrumental,” noted Aboudi, who cited a visit conducted by the organization’s leader Sheikh Qais al-Khazali to a martyr’s family in the city of Basra. “At the end of the visit, the martyr’s mother said she wanted to greet Sheikh Khazali and we expected her to ask him for help. She told him instead that she had another son she wished to send to fight against IS in order to replace her martyred son.”

Asaib Ahl al-Haq believes the PMU will play a prominent role in ensuring the stability and security of Iraq’s future and that the next prime minister will have to tackle two important issues. “First, the position of fighters should be guaranteed within the new formation, without any decrease in their numbers, amounting to over 120,000 fighters. Second, military officers in the PMU should keep their military ranks and titles and no new officers should be brought in from outside the PMU,” he said.