Many Iraqi politicians resent IRGC meddling in their affairs

The new Quds Force commander visited Baghdad in an attempt to resume his predecessor's work, but he faced resistance from Iraqi politicians, who opposed his interference in domestic affairs. 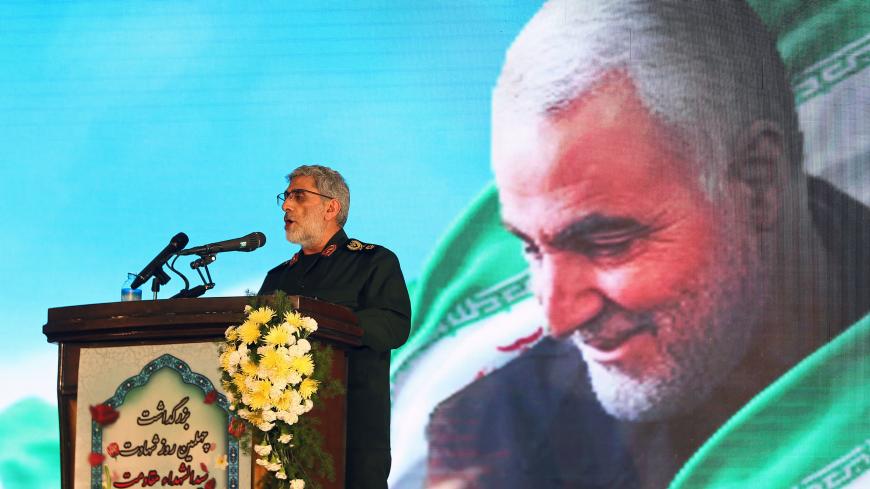 His visit was an attempt to unify Shiite forces in nominating a new prime minister — one who would have close ties to Iran — amid the fruitless efforts of the current prime minister-designate, Adnan al-Zurfi, to form a Cabinet. Zurfi is currently facing opposition from the Shiite parliamentary majority.

Yet Ghaani failed to unify the Shiite factions, unlike his predecessor Qasem Soleimani, who brought Shiite forces together to carry out Iran’s objectives. Ghaani not only failed to unite Iraq's leaders but also drew condemnation and criticism from the Shiite leadership.

Al-Monitor learned from a senior clerical source in Najaf that the office of Grand Ayatollah Ali al-Sistani rejected Ghaani’s request for a meeting. Furthermore, influential Shiite cleric Muqtada al-Sadr canceled a prescheduled meeting with Ghaani, stating in a written message to Ghaani, delivered by Sadr’s military adviser, Abu Doua al-Issawi, that "there should be no foreign interference in Iraq’s affairs."

Parliamentarian Assad al-Murshidi, a member of the National Wisdom Movement led by Shiite cleric Ammar al-Hakim, said in a press statement, “The timing of Ghaani’s visit to Baghdad was improper and a clear interference attempt in the formation of the new government.”

Zurfi finalized his Cabinet April 4 and sent a request to parliament to hold a session to vote on his Cabinet.

“Zurfi managed to obtain a parliamentary majority,” said parliamentarian Nada Jawdat of the Nasr coalition. “[Ghaani’s] visit did not … thwart Zurfi’s government but, on the contrary, it increased the parliamentary support for the upcoming government.”

Parliamentarian Alia Nassif of the State of Law coalition said Ghaani was pressuring Shiite factions to withdraw their support for Zurfi. “It is a shame that Iraqi political leaders need foreign guardianship to decide on important issues related to their own country,” Nassif said.

In the same vein, Sunni parliamentarian Raad al-Dehlaki of the Forces Alliance demanded that the Iraqi foreign minister summon the Iranian ambassador in Baghdad to complain about Ghaani’s interference.

Despite Ghaani’s opposition to Zurfi’s appointment as prime minister, Zurfi is determined to form his government.

“Those opposed to the government can express their position in parliament alone,” said Zurfi at a press conference in Baghdad April 4, confirming that he did not meet with Ghaani.

Regardless of whether Zurfi's government receives parliamentary approval or if he is replaced by the current head of intelligence services, Mustafa al-Kadhimi, as many Shiite parties are proposing, the divisions among the Shiite forces are a clear sign that Ghaani failed in his mission in Iraq.

Ghaani did not meet Sunni or Kurdish politicians during his visit to Baghdad, indicating that, unlike Soleimani, he does not have personal relationships or connections among Iraqi politicians outside the Shiite circles.

In fact, Ghaani lacks several crucial qualities needed to lead Iran's forces in the Arab world. Unlike Soleimani, Ghaani does not speak Arabic and lacks charisma. Regardless, Ghaani's recent Iraq trip indicates that the Quds Force is still pursuing an Iraq dossier.

Last month, Ali Shamkhani, the secretary of Iran’s National Security Council, visited Baghdad and met with President Barham Salih, parliamentary speaker Mohammed al-Halbusi and caretaker Prime Minister Adel Abdul Mahdi. Shamkhani’s visit was seen as a sign that Iran was transferring the handling of its Iraq dossier from the Quds Force, a branch of the Islamic Revolutionary Guard Corps, to Iran's diplomatic apparatus. However, Ghaani’s trip, as well as the increased number of Shiite militias in Iraq, shows that Iran still views Iraq through a Quds Force lens.

“We [are] rejecting the appointment of the US intelligence candidate Adnan al-Zurfi,” they said, pledging to escalate attacks on US interests in Iraq. The statement was signed by Asaib Ahl al-Haq, Nujaba Movement, Kataib Sayyid al-Shuhada, Kataib al-Imam Ali, al-Awfiya Movement, Saraya al-Ashura, Kataib Jund al-Imam and Saraya al-Khorasani.

A day after the statement, US oilfield services company Halliburton was targeted by several Katyusha rockets in Basra, part of a series of attacks on US troops and interests in Iraq.