Sistani calls for nominating new faces for next prime minister

As Haider al-Abadi's chances to serve a second term decline due to the bloody protests in Basra, Iraqi politicians are looking for a new face to head the new government. 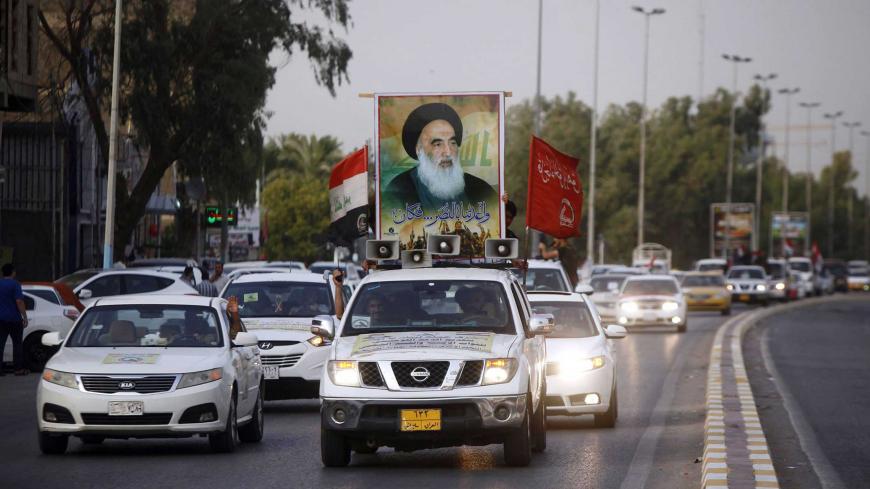 The recent bloody protests in Basra have lowered Prime Minister Haider al-Abadi's chances of serving a second term in office. The political blocs and influential parties agree that Abadi has failed to manage the Basra crisis, and they now call for a new face for the post of prime minister.

Hadi al-Amiri, the head of the Fatah Alliance, met Sept. 12 with Shiite cleric and head of the Sairoon Alliance Muqtada al-Sadr to discuss the possible alliance that would make them eligible to form a new government. Sadr formed the Reform and Reconstruction Coalition with Abadi previously, but it seems that he is looking for an alternative given Abadi's current position.

The office of Iraq's top Shiite cleric, Grand Ayatollah Ali al-Sistani, issued a statement Sept. 10 calling for selecting a new prime minister who is competent and courageous to run a country plagued by rampant corruption and a weak state system.

The statement said, “The [Shiite] authority told the various [political] parties … that it will not support any new prime minister chosen from the politicians who have been in power in the past years, whether he was affiliated with a party or independent." The statement claimed that "most of the people have lost hope in any of these figures to achieve the desired improvement of the situation and to fight corruption.” It continued, “If a new figure endowed with competence, integrity, courage and firmness is chosen, it would be possible to communicate with the new prime minister on the country’s best interests; otherwise, the authority would maintain its approach of boycotting the country's government officials.”

Sistani's statement came in response to claims by some politicians that the latter had proposed several candidates for the office of prime minister and refused the nomination of others. Mohammed al-Ghabban, former interior minister and a leader of the Fatah-affiliated Badr Organization, said Sept. 10 that the religious authority had intervened to find an alliance between the Fatah Alliance, which includes a number of factions of the Popular Mobilization Units (PMU) close to Iran, and the Sairoon Alliance. Ghabban noted that the events in Basra and the poor performance of the government in dealing with this crisis and its repercussions undermined the Reform and Construction Coalition between Abadi and Sadr. “This has led to new alignments, convergences and understandings between Fatah and Sairoon under the guidance of the Shiite authority,” he said.

Sabah al-Saadi, a leader in the Sairoon Alliance, had announced earlier the receipt of "an official communique from the Supreme Religious Authority rejecting the five candidates for the post of head of the next government." Saadi said that Sistani "refuses" to see as the next prime minister Abadi, Nouri al-Maliki, Hadi al-Amiri, former head of the PMU Faleh al-Fayadh and Tarek Najm, a leader of the Dawa Party who is close to Maliki.

In his statement, Sistani categorically denied this. “This is inaccurate. The nomination of the prime minister is a prerogative of the largest bloc under the constitution. Other blocs cannot reject specific candidates. Therefore, the authority has not rejected or nominated any specific candidates.”

Abadi’s opponents praised Sistani's statement, urging Abadi to withdraw his candidacy for the premiership. “The recent statement of the religious authority was the blow of mercy to the American project," Qais al-Khazali, leader of Asaib Ahl al-Haq affiliated with the Fatah Alliance, wrote on Twitter. "It [Sistani's statement] is a road map for forming the government and the next political stage."

Sadr welcomed Sistani’s directives, stressing the “need to abide by the authority’s recommendation to accelerate the formation of the government in accordance with new rules and pumping new blood in. And not repeat the same mistakes.”

Khazali considered Sadr's statement as a rapprochement between his Fatah Alliance and Sadr’s Sairoon Alliance. He said, “The recent statement by Muqtada al-Sadr came at the right time to deal with the current situation," noting that “this statement is in line with the Fatah Alliance initiative to abide by the authority’s conditions to select the prime minister and the Cabinet.”

Sistani’s statement, however, was directed at the Fatah Alliance as well as the Abadi-led Al-Nasr Alliance. Fatah had previously nominated Amiri, the head of the Badr Organization, for the position of prime minister, which Sistani opposed by saying that he "will not support any new prime minister chosen from the politicians who have been in power in the past years." Amiri is also included among the politicians who were in power in the past years, when he was minister of transportation and deputy commander of the PMU.

As PMU factions with the Fatah Alliance push toward removing Abadi from office, the United States continues its intensive efforts to support Abadi in serving a second term in office, to prevent the pro-Iranian parties rising to power. In the same vein, US Republican senators plan to introduce legislation imposing sanctions on Iran proxies in Iraq, which mostly have gathered as part of the Fatah Alliance. The bill would impose terrorism-related sanctions on Iranian-controlled militias, whose political wings are allied under the Fatah Alliance. It also will oblige the US secretary of state to publish and maintain a list of armed groups receiving assistance from Iran.

In light of these developments, all the parties will try to nominate new names that have not been previously involved in the political power in the past years for the post of prime minister, in a bid to sway the Shiites who hold Sistani in high esteem.

Local newspapers reported Sept. 11 that Al-Binaa Alliance, which includes the Fatah Alliance, the State of Law Coalition in addition to other smaller parties, nominated Tarek Najm, who used to serve as head of the prime minister’s office during Maliki’s first term.

The existing blocs are expected to collapse, as all conflicting parties are seeking to forge new alliances that would allow them to nominate new names that would be acceptable by the Shiite segment.

However, Raid Fahmy, a leader of Iraq's Communist Party allied with Sairoon, said Sept. 12 that the talks between Fatah and Sairoon have not reached a signed agreement yet.

It appears that Sistani was trying in his last statement to make a breakthrough in the political impasse, as the winning blocs failed to move forward with the formation of a new government, while parliament convened for the first time on Sept. 3.

Things hit rock bottom when each of the Reform and Construction Coalition, led by Sadr and Abadi, and Al-Binaa Alliance, led by Amiri and Maliki, announced separately the formation of the biggest bloc to form the government according to the Iraqi Constitution.

Nominating new figures could open the door to broader discussions and political negotiations between the different blocs to reach an agreement and proceed to form a new government.