The political alliance that allowed Iraq to move forward in building a new government could be on the brink of collapse. 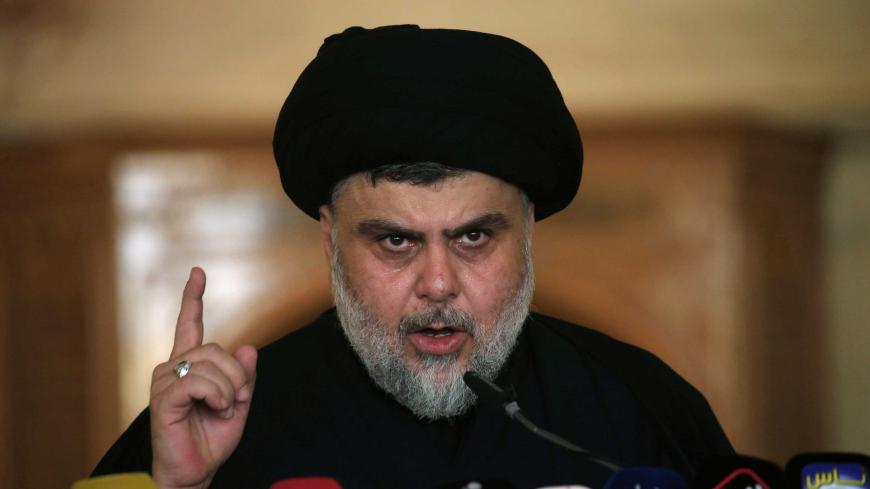 After months of delay in forming a government, Iraq recently was able to begin the process by creating a coalition between two parties. More recently, however, accusations of corruption have threatened to tear their affiliation apart.

Shiite cleric Muqtada al-Sadr, head of the Sadrist Movement and the Sairoon Alliance in Iraq, had teamed up with Hadi al-Amiri, leader of the Fatah Alliance. Their union gave them the upper hand in parliament and allowed them to select a prime minister, who has since filled most — but not all — Cabinet positions.

But on Nov. 19, Sadr wrote a letter to Amiri, accusing some Sunni leaders of the Fatah-affiliated Al-Binaa Alliance of accepting foreign support and subsequently spending huge amounts of money to buy ministry appointments.

The discord has put political cooperation between Sadr and Amiri on the line and could cause the government to weaken or fall.

In his response to Sadr's letter, Amiri reminded him, “We do not keep silent against any corruption being committed against the homeland." In an attempt to leave the ball in Sadr’s court, Amiri asked him to pass along the relevant information "so that the judiciary follows up.” By doing so, he aims to move the authority regarding this issue from Sadr to the courts.

The discord began before the corruption allegations, however. The problem goes back to a series of rejections. First, Sadr's group rejected the Amiri coalition's Ministry of Interior candidate, Faleh al-Fayadh (head of the Popular Mobilization Units). Sadr's group also rejected the candidate for the Ministry of Culture put forth by the Asaib movement, another faction of Amiri’s Fatah Alliance.

Sadr’s letter caught Amiri off guard and embarrassed him because it implied to his coalition that he lacks integrity.

Ayman al-Shammari, a Sairoon Alliance member, told Al-Monitor that if Sadr’s accusations prove true, “The leader of the Sadrist movement is going to be harsh, as it's known that he doesn't tolerate corruption.” He described Sadr’s letter to Amiri as “a warning against accepting corrupt ministers.”

But Shammari said he doesn't expect “a strategic break in ties between the two parties.”

"Sadr’s letter adds clarity to the relationship. It emphasizes the need to cooperate in reaching a solution without allowing corrupt deals to pass," Shammari said, adding, "Both parties prioritize the formation of a government. Both sides will have to strategically cooperate.”

This perception seems to contradict what is actually happening. The government's formation has been delayed. More delays are expected if the Sunni bloc linked to the National Axis Coalition follows through on a threat to withdraw from Al-Binaa Alliance as a result of Sadr’s insult. Jamal al-Karboli, Sunni leader of the National Axis Coalition (aligned with Amiri’s group), responded to Sadr in an angry Nov. 22 tweet, which further aggravated the situation and could mean more delays.

Wathek al-Jabiri, a political analyst and adviser at the Iraqi News Development Agency, told Al-Monitor, “The Sadrist Movement leader has resorted to a new strategy to reach his political goals — straightforward and clear discourse on selling positions. He showed the public the discord and accusations that usually happen in restricted political circles behind closed doors. He exposed everyone to the Iraqi public. This wins him popularity points among [many] Iraqis."

Jabiri added, “The relationship between both sides has gotten worse, especially since the discord has become public. Most political actors like Fatah prefer keeping things confidential.”

Now, Amiri feels pressure to respond to Sadr’s accusations by revealing anyone involved in selling positions, Jabiri said, adding that he expects “Amiri and his Sunni counterparts to provide evidence of corruption even if it involves members aligned with the Sadrist Movement, like the Sairoon [Alliance]." That action could help mend the rift.

"Amiri is meanwhile working to reduce the Sunni involvement in this case of corruption," Jabiri added.

Hunain al-Qaddo, a leader in the Fatah Alliance, discussed the roots of the conflict. “The essence of the issue is a power struggle between Fatah and Sairoon. It led them to a political impasse that intensified with a disagreement on the key security positions, namely the position of the minister of interior," he told Al-Monitor.

“Fatah’s policy in gathering the Shiite blocs under one umbrella to move forward with the government will push it to ignore the negative repercussions of the [Sadr] letter … to maintain unity among Shiites. This is the priority that precedes other political positions and political gains,” Qaddo added.

Sadr and Amiri aren't the only ones to influence whether the alliance remains intact. In fact, Iran gave the alliance its blessing in June. This makes it very difficult for the two sides to cut ties.

But even Iran won't be able to maintain the alliance if there's too much pressure. The alliance is a strategic one based on common interests and not on any ideology or political agenda.