A bloc of Iraqi political parties comes together to form a strong opposition against Prime Minister Adel Abdul Mahdi in an apparent bid to remove him from office. 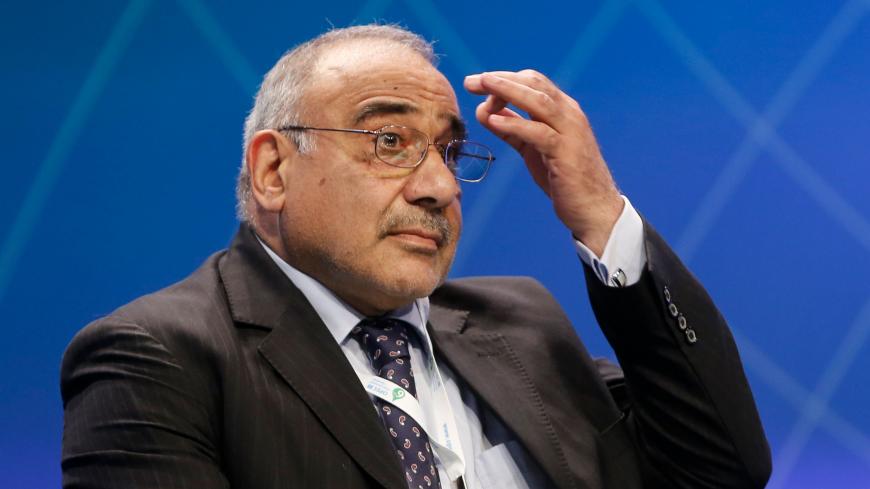 Adel Abdul Mahdi attends an OPEC seminar ahead of an OPEC meeting in Vienna, Austria, June 3, 2015. Then oil minister, he became prime minister in the fall of 2018. - REUTERS/Leonhard Foeger

BAGHDAD — Two days after the Victory Alliance led by former Prime Minister Haider al-Abadi announced it was forming a “reform opposition” to the Iraqi government, the National Wisdom Movement led by Ammar al-Hakim announced June 16 the adoption of the “constitutional opposition” which may also include the Sairoon Alliance led by Muqtada al-Sadr. This could mark the beginning of a large parliamentary opposition.

On June 17, Sadr announced a 10-day deadline for the completion of the Abdul Mahdi's government and threatened, in a statement, that the Sadrist movement would “take a new stance should this not happen.”

This prompted the Sairoon Alliance to call for the questioning of the prime minister and to threaten to oppose him.

The other major parliamentary bloc is the Al-Binaa Alliance, which contains a large number of leaders of the Popular Mobilization Units (PMU). However, it also failed to come up with the parliamentary majority needed to name a prime minister.

This brought about the naming of Abdul Mahdi by consensus.

But Abdul Mahdi lacks a strong political power base, and has faced numerous hurdles in completing his government. The reform blocs have been opposing the confirmation of Abdel Mahdi government ministers, causing Grand Ayatollah Ali al-Sistani to warn of the seriousness of the situation. In a statement June 14, Sistani criticized the “despicable competition for posts, the ongoing rife corruption and the failure to fill the acute shortage of services.”

This is when the National Wisdom Movement grabbed the opportunity to declare itself as “a constitutional opposition” that refuses to take part in running any government office.

A member of parliament for the Wisdom Movement, Ali al-Badiri, told Al-Monitor that “his movement will not accept any post until the government is formed.”

“The aim of the opposition is to correct the course of the state and the government that failed in achieving the program it promised, and did not let go of confessionalism. Should things not change in the coming months, the Wisdom Movement will work on withdrawing confidence from the government as is the natural case in all democracies,” Badiri said. Under confessionalism, power has been shared between Iraq's three main ethno-religious groups — Shiite Arabs, Sunni Arabs and Kurds — through complex and controversial negotiations.

Ali al-Jourani, a leader in the Wisdom Movement, told Al-Monitor, “Hakim met with Abdul Mahdi in April and told him that the movement was adopting the choice of the parliamentary opposition because the government program had been poorly and slowly implemented. He offered him two documents; the first included Wisdom Movement notes on governance and the second its program as an opposition bloc.”

Jourani added, “Shortly before the Wisdom Movement announcement, Hakim met again with Abdul Mahdi and stressed that the movement is carrying on with the opposition option because they did not see any concrete steps in the right direction by the government.”

Jourani also said, “Some have interpreted the movement’s choice of opposition as a threat to Iran, since Abdul Mahdi’s government is close to Tehran.”

A mermber of parliament for the Sairoon Alliance, Ghaib al-Amiri, told Al-Monitor that the “alliance will carry out the questioning of the prime minister on his government program and the reform plans set by Sadr. If he has valid justifications [for his actions], we will continue to support him; otherwise we will take a different stance vis-a-vis the government, which will announce later on.

Amiri expressed surprise at the Wisdom Movement's rushed decision to declare itself a parliamentary opposition without referring first to the Reform Alliance, which reflects the fragility of the alliance.

Amiri added that Sairoon rejects the current distribution of ministerial posts based on confessionalism, which is the reason why the alliance refused to be part of the government. “We will not let go of our plan to interrogate the government about some posts,” he said.

Taha al-Difai, a member of parliament for the Victory Alliance, told Al-Monitor that the group is backing the idea of a reform opposition "in the sense that it is trying to reform the government so that it can support it again, unlike the Wisdom Movement, which declared an official constitutional opposition to the end of the current legislative term.”

He said, “Should the distribution of positions continue based on confessionalism and nepotism, we will not hesitate to form a large opposition coalition that can withdraw confidence from the government.”

Difai denied claims that the opposition's aim is actually to get other special ministerial positions.

“We did not participate in the formation of the government and we did not take part in the distribution of ministerial posts. This is a decision that we took early on and it is irreversible,” Difai said.

It seems that a withdrawal of confidence from Abdel Mahdi is in the offing, as the Wisdom Movement and the Victory Alliance appear to be digging in their heels, while Sairoon is likely to follow suit after the end of Sadr’s deadline.