Is Abadi looking to return to prime minister's post?

Former Iraqi prime minister Haider al-Abadi has resigned from the Islamic Dawa Party, raising questions about his possible return to the premiership. 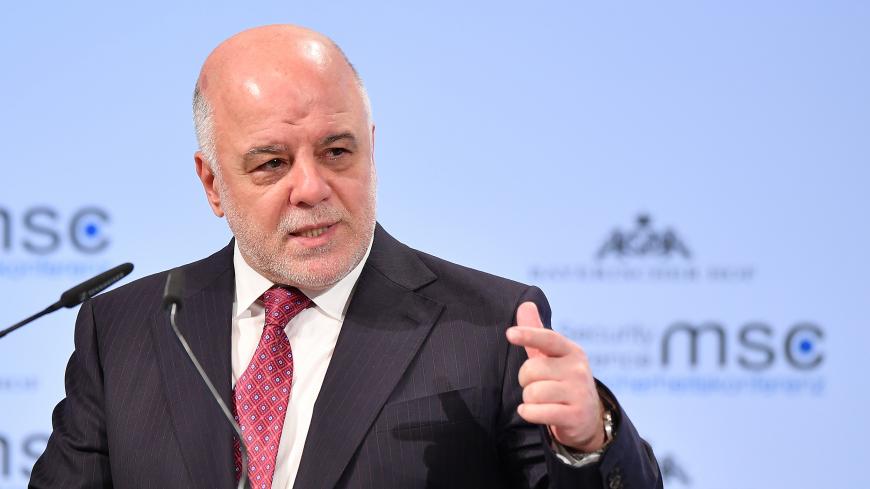 Sources say Iraqi leader Haider al-Abadi may be maneuvering to return to his former post as prime minister, now held by by Adel Abdul Mahdi. Here, Abadi delivers a speech on Feb. 17, 2018, at the 2018 Munich Security Conference in Germany while he was still prime minister. - Sebastian Widmann/Getty Images

Former Iraqi Prime Minister Haider al-Abadi announced May 31 his resignation from all his positions in the Islamic Dawa Party, whose politburo he headed. His move raised questions about his potential plans to return to the prime minister's post.

Abadi also met with Iran's ambassador to Baghdad on June 11; the former prime minister discussed the bilateral relationship between the two countries and also expressed his support for Iran against the sanctions imposed by the United States. The meeting, which was the first of its kind since his departure as prime minister, was read as an attempt to improve his relationship with Iran, which has a big influence in Iraqi politics.

Abadi also met with the new-appointed US ambassador, Matthew Tueller in Jun. 13. They discussed the overall political situation in Iraq and the region.

Abadi's political career began in and developed through Dawa. The party was formed in 1957, and it monopolized the prime minister's post from 2005 until 2018, when Abadi stepped down in favor of independent political candidate Adel Abdul Mahdi, who was the consensus choice of the two largest parliamentary blocs. These two blocs are Al-Islah, which includes the Abadi-led Victory Alliance and the Sairoon Alliance led by Muqtada al-Sadr, and the Construction Bloc led by Hadi al-Amiri, which includes political wings from the Popular Mobilization Forces (PMU) and factions that are strongly tied to Iran.

Abadi’s withdrawal from the party heralded his possible return to the prime minister's post, according to June 7 statements from sources who said Al-Islah was attempting to bring Abadi back as prime minister.

Ghaleb al-Shahbandar, a former leader in the Dawa Party and a political activist, told Al-Monitor, “Some understandings constitute undeclared agreements between Abadi and Sadr, who supported Abdul Mahdi's reaching the premiership. These involve putting Abadi in the premiership once again, provided he fulfills Sadr’s request to leave his positions in the Dawa Party.”

Shahbandar’s words seem to have some basis; the Victory Alliance and Al-Hikma National Movement led by Ammar al-Hakim said June 7 that they are switching sides to the opposition. This could mean that Abdul Mahdi would lack the votes to resolve major disputed issues.

Islamist thinker Ali al-Moumen, a former member of the Dawa Party, told Al-Monitor, “Abadi’s withdrawal from his positions is a prelude to his complete departure from the party to cement the independence of his political stances from those of the party.”

Moumen said, “Abadi is working on turning the Victory Alliance into a liberal political party. Leaving the party in return for running for the premiership has always been the condition of his allies Sadr and Hakim.”

Moumen ruled out the possibility that the prime minister's post would turn “into a point of contention in the foreseeable future, because Mahdi still enjoys the support of most political blocs, despite differences over some of his policies. Even if some parties intend to topple his government, the alternative will not be Abadi.”

Victory Alliance member Ali al-Suneid told Al-Monitor, “Talk about Abadi’s return to the premiership is premature, despite it being a possibility. Analyses and conclusions reflect the opinions of their beholders. Abadi and the Victory Alliance have thus far supported the government.”

However, Abadi announced May 5 his readiness to reassume the premiership if Abdul Mahdi’s government does not last, and he underlined what he called his successful experience in leading the country.

Abadi seems to have a good shot at the premiership because of the Sairoon Alliance’s irritation with Abdul Mahdi. Sabah al-Saeidi, a leader in the alliance, warned Abdul Mahdi on Dec. 5, saying, “The countdown for his government will begin if he continues to obey others’ whims." This was a reference to the PMU and the Construction bloc.

Waseq al-Jabiri, a political analyst and Media Development Center adviser, told Al-Monitor, “Through his withdrawal from the Dawa Party positions, Abadi aims at distancing himself from disputes in the party and to be prime minister once again. He is now busy with political and social activities for that purpose.”

Sadr said April 25 that the six months given to Abdul Mahdi have passed and threatened public protests, saying, “You know very well that you had six months to one year to prove your success.”

Sadr has reservations about the PMU’s political role, and Abadi accused PMU leaders May 25 of gathering fortunes at the expense of public funds. He wondered about the source of the leaders’ properties and expressed dissatisfaction with the performance of Abdul Mahdi’s government. Abadi said, “The corrupt elements decided against my victory for a second term because they were worried about their interests.”

While Abdul Mahdi’s government does not normally respond to the news and related speculation, reports that the prime minister might resign proved the exception. A source close to Abdul Mahdi said June 6 that the prime minister has no intention of stepping down. But the truth of the matter is that Abdul Mahdi does not belong to any strong political bloc supporting him. Therefore, he remains at the mercy of the blocs that nominated him; this may be a key weakness of his government and could even lead to his dismissal from the premiership.