Political pressure on the prime minister-designate, Mohammed Tawfiq Allawi, could bring him down before he even forms a government. 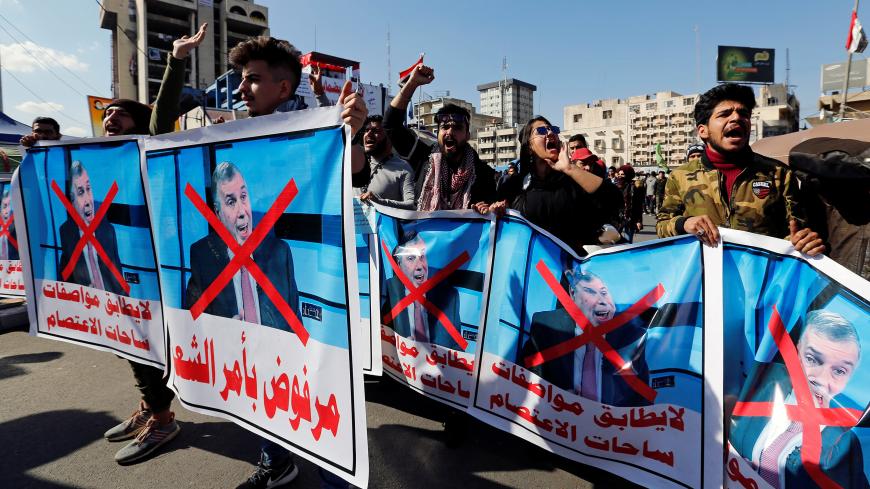 BAGHDAD — There are multiple challenges keeping Mohammed Tawfiq Allawi, recently named Iraq's prime minister-designate, from forming the government of independent technocrats that he pledged. The first major hurdle is that some political blocs want to continue to hold onto their current level of representation in the Cabinet.

Under the constitution, Allawi is required within 30 days to form a government and go to parliament to obtain a vote of confidence with an absolute majority of at least 165 out of 329 parliament members.

The Fatah and Sairoon Shiite blocs are the only ones supporting Allawi. They have 47 and 51 parliament members, respectively. Based on that, the new government needs a minimum of 67 additional votes to win a vote of confidence. Such a number can only be secured with the participation of the Kurdish and Sunni blocs. This is true particularly since some of the Shiite blocs, such as former Prime Minister Haider al-Abadi's al-Nasr bloc, refused to name Allawi to form a government.

A source familiar with the talks to form a government told Al-Monitor that Allawi is finding it difficult to convince the Kurdish parties in particular to give up their current share of positions in the new government.

The source, who declined to be named, added, “Not all of the Sunni blocs consent to a government of independents. They want to take part in naming the new ministers.” The source said, “Allawi is seeking to include the Shiites, Kurds and Sunnis in the government, provided that the ministers are not a part of the political blocs. In case he fails to obtain support from said blocs, he will halt his attempts to form a new government.”

The source also said, “The Shiite sides warned Allawi that naming ministers from the Kurdish and Sunni parties would result in their nominating someone else to head the government.” This is what perhaps pushed Sadrist movement leader Muqtada al-Sadr to declare opposition to the pressure placed on Allawi. Sadr said in a Feb. 11 tweet, “We are hearing of partisan and sectarian pressure to form an interim government. That would result in our being less satisfied with it, and could even lead us to disavow it. … We continue to call for reforms.”

Moreover, Hadi al-Amiri’s Fatah bloc indicated that the pressure placed on the prime minister-designate would obstruct Allawi's quest for the selection of independent ministers. Abdel Amir el-Debbi, a member of the bloc, said, “The Fatah bloc gave Allawi the freedom to select the ministers. The other blocs need to follow in our footsteps in order for the government to be formed within the constitutional deadline, and to refrain from holding onto particular ministries under the pretext of the election results.” Under the current sectarian quota system based on election results, blocs receive a certain number of seats in the Cabinet.

Mahmoud Khoshnao, a top official with the Patriotic Union of Kurdistan (PUK) party, told Al-Monitor that the Kurdish blocs, namely Gorran (Change), the Kurdistan Democratic Party and the PUK, agreed that the Kurdistan Regional Government and the prime minister-designate should hold direct talks on the formation of a new government.

Commenting on Allawi’s desire to form a government where political parties are not represented, Khoshnao said, “There is nothing called nonpartisan government in a parliamentary system. Having independent ministers is something irrelevant.” He further said, “Allawi has the right to seek to nominate competent and experienced ministers, without their being selected from outside the political parties and blocs. The current talks are centered on the nature of the ministerial program.” He added, “We have not touched on particular names for the ministerial portfolios.”

Meanwhile, the Sunni blocs are divided. There are those allied with Fatah, such as the National Axis bloc, which agreed to the selection of nonpartisan new figures. But the National Forces Alliance, led by parliament Speaker Mohammed al-Halbusi, is not a full advocate of such an idea. It holds three ministries in the Iraqi government and refuses to sacrifice them before the talks with Allawi start, said alliance member Mohammed al-Karbouli. Speaking to Al-Sumaria TV on Feb. 10, Karbouli questioned Allawi’s ability to keep the promises he made the day he was designated. Karbouli underlined that his bloc did not take part in the designation of Allawi and will not be engaged in talks with him until it becomes clear which party nominated him.

So far, none of the blocs have officially nominated Allawi as prime minister. Yet it was leaked that the Sairoon bloc would nominate him with the approval of Fatah. But other blocs have no desire to take responsibility for a candidate who is not tolerated by the street.

It also appears that Allawi is unlikely to be able to overcome the pressure from the political blocs without having to break his promises to bring about reforms.

While protesters in southern and central cities are demanding new elections, Allawi's government would not be able to serve as an interim one preparing for early elections if two-thirds of the legislators do not vote to dissolve the parliament. Moreover, an as-yet unratified new electoral law that many see as inadequate and disputes over the composition of the elections commission make it seem very unlikely for Allawi to be able to hold early elections; the last elections were held in 2018 and the next ones are scheduled for 2022.

All this could mean that Allawi won't be able to effect reforms or even that he will fail to form a government, in which case Abdul Mahdi would continue as prime minister.