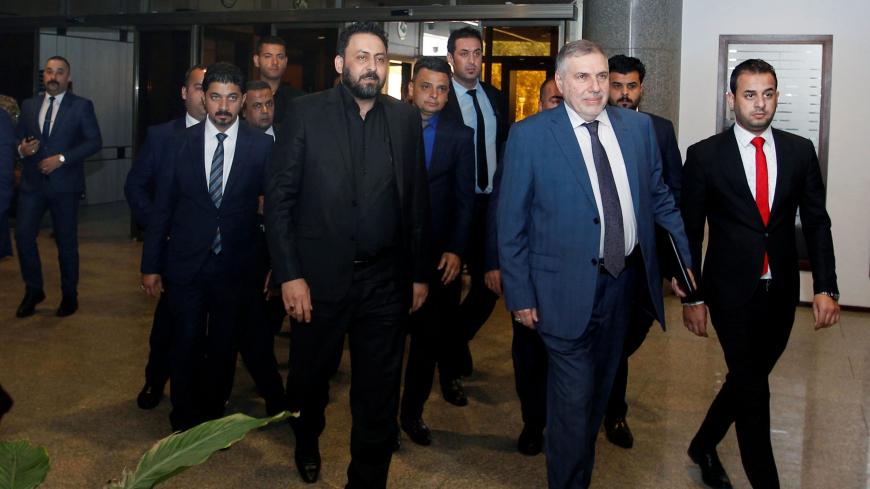 Iraqi Prime Minister-designate Mohammed Tawfiq Allawi failed to receive parliamentary approval for his Cabinet March 1, leaving Iraq in a dangerous power vacuum. Iraqi President Barham Salih appointed Allawi as prime minister a month ago, based on the recommendations of the Sairoon and Fatah blocs.

Per the constitution, Allawi had 30 days to form a Cabinet. Parliament had scheduled a session to discuss Allawi's Cabinet March 1, but it failed to meet a quorum. Most members of parliament did not attend the session because they disapproved of how Allawi was not engaging in discussions with political parties on the formation of his Cabinet. Another parliamentary session Feb. 27 also failed to reach quorum.

Afterward, Allawi appeared in a prerecorded video on television to announce his resignation from the premiership. However, his 30-day period to form a Cabinet had already expired and he would've been compelled to leave anyhow.

In a statement issued March 2, Salih called upon lawmakers to "work seriously to achieve a true national agreement on choosing an alternative Prime Minister who would be acceptable by the people."

Despite the previous constitutional guidelines, Abdul Mahdi said March 2 he would appoint one of his deputies or a minister to head the caretaker Cabinet. He has handed over some of his other tasks to the head of his office, Abu Jihad al-Hashemi. Abdul Mahdi and his supporters among the Popular Mobilization Units (PMU) do not want to hand over this post to President Salih at this sensitive time, as they view him as a US ally.

In line with Abdul Mahdi's move to prevent the president from leading the caretaker government, Kataib Hezbollah spokesman Abu Ali al-Askari tweeted March 2 that Abdul Mahdi should remain in office and that Ayatollah Ali al-Sistani could change his previous advice that led to Abdul Mahdi's resignation.

Askari warned against nominating any candidate close to United States, claiming this would be considered by Kataib Hezbollah as engaging in open war against them.

This indicates that Iran-backed PMU — of which Kataib Hezbollah is a member — are afraid of losing their political influence, leading them to threaten any candidates not affiliated with them.

Allawi accused the political parties of obstructing his efforts to form an independent Cabinet. However, Allawi's Cabinet was made up of weak and unexperienced individuals who lacked political support, as well as support from Iraqi protesters. Allawi had forgotten that, as a compromise candidate, his most important task was to bring all the parties to the table and involve them in the formation of a strong government to get Iraq out of crisis. Instead, he neglected the political parties and formed a Cabinet in isolation.

Kurds and Sunnis rejected Allawi's Cabinet, but some Shiite parties also feared how Allawi was forming his Cabinet. Along with the Kurdish parliamentarians and the majority of Sunni members, some Shiite blocs, in particular the State of Law and al-Sadiqoun blocs, affiliated with Asaib Ahl al-Haq, refused to attend the March 1 parliamentary session so as to prevent a quorum to vote on Allawi's Cabinet.

A recent interview of controversial Shiite cleric Muqtada al-Sadr by al-Sharqia TV Feb. 24 spelled the end of Allawi's Cabinet, as Allawi is seen as Sadr's candidate — an instrument through which Sadr can dominate Iraqi politics.

Sadr spoke arrogantly, presenting himself as the godfather of Iraqi politics. He said the Kurdistan Democratic Party and the Patriotic Union of Kurdistan acted in favor of Kurdish interests only. Sadr asked them to cut off their alliance with the United States, and he expressed support for the protests in Iraq's Kurdistan region against the local government, which the regional government has seen as a threat to stability.

Sadr also threatened to reactivate the Mahdi Army — which terrorized Sunni communities between 2005 and 2006 — if the Sunnis returned to setting off car bombs, which read as an accusation that Sunni politicians are affiliated with terrorism.

As Allawi waited for parliament to convene March 1, protesters from southern cities converged on Baghdad to express their rejection of the Allawi Cabinet and of how political parties have handled Iraq's current crisis.

Two Katyusha rockets hit Baghdad's Green Zone early March 2, shortly after Allawi failed to form a Cabinet. The rockets did not hit its target, the US Embassy, and resulted in no casualties. The little-known Wadollah Brigades, a PMU faction under the supervision of Shiite cleric Maitham al-Allaq, claimed responsibility for the attack. It then issued a statement retracting responsibility.

Kataib Hezbollah issued a statement warning all parties working with US troops that they would be targeted by them soon.

Iran-backed PMU factions are afraid of losing power. They failed to form a new government this round, just as they failed to keep Abdul Mahdi in the premiership post. Now, the power is no longer in their hands. The president, with the support of the Kurds, Sunnis and Shiites not affiliated with the PMU, will form a government not influenced by the PMU.

Under such circumstances, Iraq will witness more chaos unless the president can oversee the rise of a strong government supported by the majority of Iraq's political forces and the protesters, whose force in the Iraqi political scene cannot be ignored.