Power vacuum in Iraq leads to threats from pro-Iran faction

Pro-Iran factions in Iraq worry that they could lose their political sway, having failed to keep one prime minister in power, then failing in their attempt to replace him, as they recognize the next candidate could be selected from outside their political circle with the support of Kurds, Sunnis and Shiite rivals. 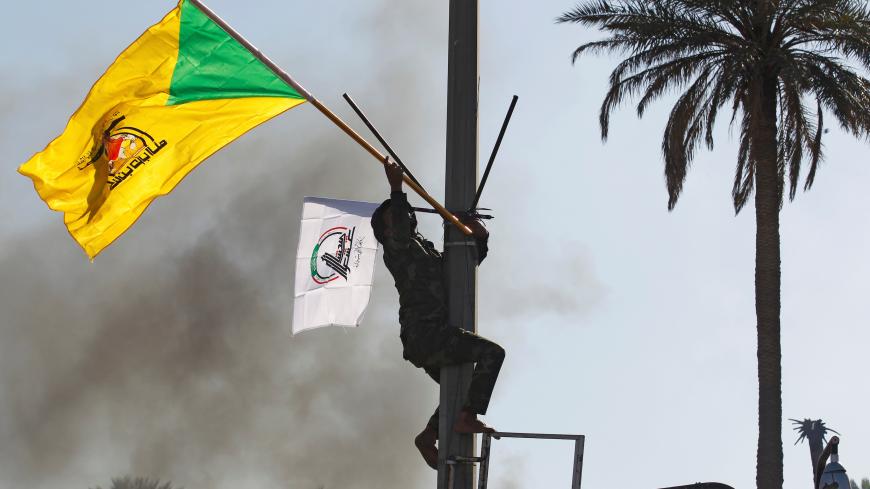 A member of the Popular Mobilization Units holds a flag of the Kataib Hezbollah militia group during a protest to condemn airstrikes on their bases, in Baghdad, Iraq, Dec. 31, 2019. - REUTERS/Khalid al-Mousily

BAGHDAD — The post of prime minister in Iraq is proving to be a tough gig.

Mohammed Tawfiq Allawi, who was designated to become prime minister with the support of pro-Iranian forces in Iraq, withdrew his candidacy March 2 after he failed to form a government within the constitutionally mandated 30-day deadline. Now those forces are looking back over their shoulders at caretaker Prime Minister Adel Abdul Mahdi, thinking he might be their best hope to retain influence in Iraq. However, Abdul Mahdi said March 2 that he is taking a voluntary absence from the post.

Allawi’s failure resulted from a large front that formed against him and his supporters in parliament. Allawi only had the support of the Iran-affiliated Fatah Alliance —- the political wing of the Popular Mobilization Units (PMU) — and, initially, the erratic cleric Muqtada al-Sadr’s Sairoon Alliance. The rest of the Iraqi political groups — including Kurdish members of parliament, the majority of Sunnis and the rest of the Shiite parties — all were united against Allawi.

Allawi’s rejection raised concern among the PMU's pro-Iranian factions, leading them to threaten to burn the country if the political parties nominate a pro-American prime minister.

“Some are trying to nominate candidates for the prime minister position who are accused of being involved in the [Jan. 3] US assassination of [Iranian Quds Force] commander Qasem Soleimani and PMU commander Abu Mahdi al-Muhandis. This is a declaration of war against Iraqi people that will burn what remains of Iraq,” Abu Ali al-Askari, spokesman for Iran-affiliated Shiite militia Kataib Hezbollah, tweeted March 2.

This is seen as a threat to ignite a civil war in Iraq if the PMU doesn't hold sway over the prime minister position.

The head of Al-Mada news, Fakhry Karim, an influential figure in Iraqi Kurdistan, posted on his Facebook page, “A militiaman threatened via a tweet to start a war against Iraq. … Iraq will not be held hostage" to outside influences.

As the PMU’s plan for preserving its influence through Allawi’s Cabinet has failed, it is taking another look at Abdul Mahdi, hoping to keep him in power. Abdul Mahdi, who has strong ties to Iran, originally was chosen as prime minister in October 2018. He was considered a compromise candidate and struggled to form a Cabinet. In November, he resigned (pending the ratification of a new prime minister) under pressure from some Shiite religious leaders and mass protests against government corruption and Iranian influence.

Askari also said that following Allawi's withdrawal, “The best option is to keep Abdul Mahdi in the prime minister's office. The only obstacle against him is the religious authority view that led to his resignation. This can be changed now.”

Abdul-Mahdi, although he had said he would leave office if his successor was not ratified by March 2, said that instead he will take a voluntary absence and hand over his duties to the head of his office, Abu Jihad al-Hashimy, and some of his Cabinet members.

This is a tactic to prevent President Barham Salih from taking on the duties of the prime minister, as the Iraqi Constitution allows. The Iraqi president met March 3 with a number of Iraqi political leaders to seek consensus on a new candidate.

Al-Monitor has learned from several sources in the Iraqi parliament who asked to remain anonymous that prior to Askari’s tweet, former Prime Minister Nouri al-Maliki, the head of the State of Law coalition, held a meeting attended by all Shiite political leaders, including Ammar al-Hakim, Hadi al-Amiri and PMU head Faleh Fayadh, and they agreed to nominate a candidate accepted by Kurds and Sunnis to avoid creating more division in the country.

A source affiliated with the Fatah Alliance told Al-Monitor that Askari’s tweet was a reaction from a minority group in the PMU to the Shiite political leaders' meeting. Askari's Kataib Hezbollah is thought to be under the direct control of the elite Quds Force unit of Iran's Islamic Revolutionary Guard Corps (IRGC).

Ayad Allawi also praised the role of protesters and some of Iraq's national leaders, such as Massoud Barzani, head of the Kurdistan Democratic Party (KDP), who did not hesitate to stand against the proposed Cabinet.

Barzani issued a statement thanking all Iraqi national leaders who he said supported democracy in Iraq by rejecting the Cabinet, which Barzani said could have resulted in more crises and political disasters.

This all is happening in conjunction with a sharp division among PMU factions.

The PMU appointed Abu Fadak al-Mohammadawi, a former Kataib Hezbollah military leader, as PMU chief of staff in place of the slain Muhandis. However, this decision was rejected immediately by four PMU factions — known as the "shrine units" and aligned with powerful Iraqi Shiite cleric Ali al-Sistani — who oppose Iran's influence.

Askari had warned previously that his group would target any Iraqis working with US troops in the country beginning March 15. On March 3, he published a list of such alleged figures.

The Iraqi Intelligence Service has warned Kataib Hezbollah that it will take legal action against the group if it continues to threaten Iraqi figures.