Iraqi deadline passes with no decision on prime minister

Iraqi political parties have failed in selecting a new prime minister, amid the rising tension between the United States and the Iran-backed Shiite militias. 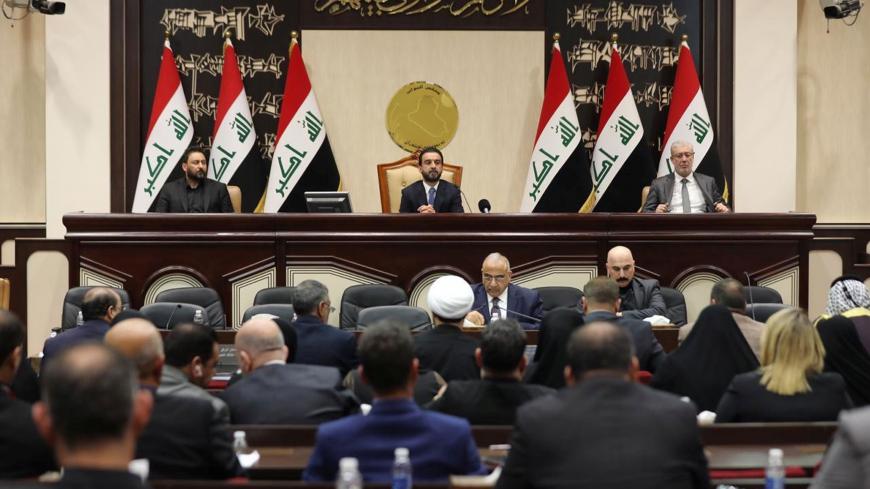 Political parties in Iraq continue to fail in finding a new prime minister and forming a transitional government that would lead the country to early elections and a new political order. This has created a power vacuum exploited by the militias to recover from the killing of their leaders — Iranian Quds Force commander Qasem Soleimani and Abu Mahdi al-Muhandis, one of the leaders of the Popular Mobilization Units (PMU) — reorganizing themselves and forming new militias.

The deadline for designating a prime minister ended today, March 16, and yet there is no agreement about any candidate among the political parties.

Following the trip of Secretary of Iran's Supreme National Security Council Ali Shamkhani to Baghdad on March 7, a seven-member committee was formed representing all Shiite forces to discuss the position of prime minister and come up with a new name that all agree on.

On March 15, leaked committee reports indicated that the committee had agreed finally on the head of the presidential office — Naim al-Suhail — and that they would suggest him to the president, who would, in turn, designate him officially.

However, Muqtada al-Sadr’s Sairoon Alliance issued a statement March 16 saying that they had not agreed on Suhail. This was followed by another statement from Ammar al-Hakim’s Hikma bloc stating that it declines to be involved in nominating anyone and announcing its withdrawal from the committee.

This suggests that Suhail is no longer an option.

Now the ball is in the hands of President Barham Salih who can designate any name and send it to the parliament for approval. The federal court affirmed the president's right to designate a prime minister without discussing this with the political parties. This means Salih has another 15 days to do so. Then, the prime minister-designate would have 30 days to form his Cabinet and go to the parliament for approval.

However, it is unlikely that Salih takes the lead and designates a prime minister, due to his abstention from making such a decision without discussing it with the political parties.

This is especially true due to the sharp difference between Salih and the Iran-backed PMU that have led to harsh criticism against him recently. Although Salih had condemned both the attacks against US troops and PMU facilities in separated statements, his language against those who committed the attack on US troops was very strong. He called the attack against US troops a "terrorist action," while Kataib Hezbollah and Harakat Hezbollah al-Nujaba had praised the attack, calling for an increase in attacks against the United States in Iraq. They both slammed all Iraqi politicians who criticized the attack against the United States. Earlier, they had also accused the president of being involved with a US scheme against the PMU in Iraq as well.

Under these circumstances and with the rapidly increasing coronavirus threat, there is a real possibility that everyone agrees to keep Adel Abdul Mahdi in office for a few more months, until the coronavirus situation improves and preparations for early elections can begin.

However, it is not clear yet if Abdul Mahdi would accept to return to the office from which he voluntary left a few weeks ago. It is likely he would ask to get a vote of confidence from the parliament again, which would be very difficult due to the protesters’ objection.

Meanwhile, the tension between the United States and the Iran-backed Shiite militias is reaching a very dangerous level.

The rocket attacks came after US retaliation against some of the pro-Iran Shiite militias, targeting their bases and weapons warehouse in southern Iraq.

A new militia called Thairoun claimed the responsibility for the attacks against Taji camp. Kataib Hezbollah and Harakat Hezbollah al-Nujaba have also praised the attacks and said they are preparing to target US troops as well.

Lebanese Al-Akhbar newspaper, which is known for being close to Hezbollah, stated March 13 that the “resistance factions” — in reference to pro-Iranian militias — have entered a new level of confrontation with the United States by forming secret organizations in Iraq.

It seems that the Shiite militias have already recovered to a large extent from the death of their leaders — Soleimani and his right-hand man Muhandis — and they are exploiting the coronavirus crisis to hit the United States in Iraq, forcing it to withdraw from the country — which would provide a big victory for Iran and facilitate its economic recovery from US sanctions through its political and economic influence in Iraq.

In addition, the militias are using maximum pressure to prevent the appointment of a new prime minister who is close to the United States.

At the same time, attacks against the protesters continue and have even increased with activists assassinated or abducted last week.

The continuing conflict between the Shiite militias and the United States could take Iraq into an open war, leading the country — together with the political deadlock and coronavirus crisis — into long-term chaos. While this would provide a great chance for Iran to reorganize and rebuild its network in Iraq, this would end in a disaster for the United States with more troops being targeted and thus increasing the cost of protecting US troops in Iraq.

Under these circumstances, the only person who could save the country is a strong prime minister close to all internal and external forces to form a capable government that is able to manage the multi-aspect crisis and take the country out of it. The question remains if such a person exists and if so, whether all parties would agree on his appointment.