Iran-backed militias in Iraq are facing strong criticism from politicians and protesters after the attack on US troops at the Taji military base. 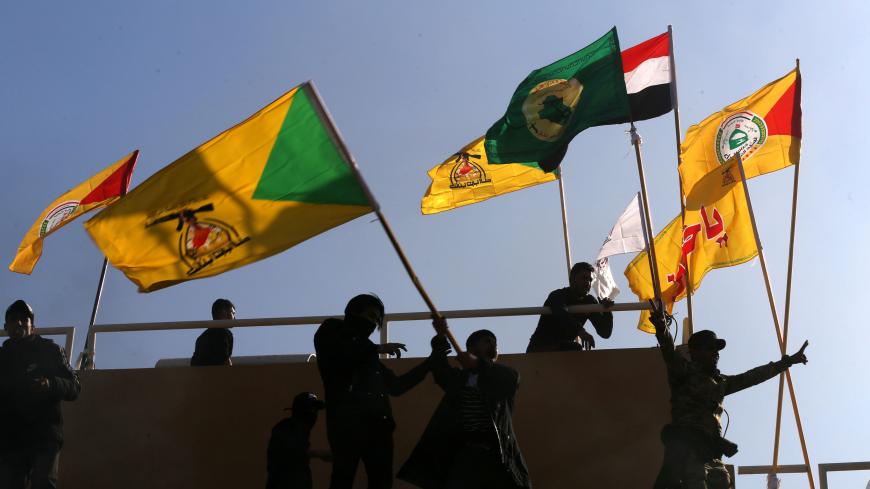 Iraqi protesters wave the Hashd al-Shaabi flag, among others, while storming the US Embassy in Baghdad, Iraq, Dec. 31, 2019. - Murtadha Sudani/Anadolu Agency via Getty Images

The Taji military base north of Baghdad was hit March 11 by 18 Katyusha rockets, killing one British and two American soldiers and injuring dozens. No one has claimed responsibility so far, but many fingers are pointed at the Iran-backed Popular Mobilization Units (PMU) factions in Iraq.

Soon after the attack, unidentified jets hit the Imam Ali military base of Kata'ib Hezbollah, Kata'ib Sayyid al-Shuhada, Saraya Ashura and other Iraqi Shiite militias in Albukamal near a strategic Syrian border crossing with Iraq, killing about 25 and wounding dozens. No party has claimed responsibility for the attack.

Iraqi officials including the president, prime minister, parliament speaker and many heads of political parties were quick to condemn the strike. President Barham Salih called it a "terrorist attack."

Hezbollah has not claimed responsibility but has praised the perpetrators of the attack on Taji in a statement on its website, offering them support and calling upon all national forces to “resume jihadi operations against US to kick them out of the country,” adding, “The attack was planned at the best possible time. Hezbollah also asked the perpetrators to reveal themselves and record this great dead in their history.

Other PMU factions have remained silent.

Although the Iraqi government has formed a committee to find the perpetrators, no one expects results, as it was the case in all other previous attacks against US troops in Iraq.

Interestingly, the US-led coalition to combat the Islamic State in Iraq has also formed an investigative group, according to a statement by the coalition.

Meanwhile, US Secretary of State Mike Pompeo told British Foreign Secretary Dominic Raab in a phone call that “those responsible for the attacks must be held accountable.” His words suggest that the United States is planning an operation against the militias that would most likely target Kata'ib Hezbollah and its close allies at Imam Ali and its Iraqi bases.

Regardless of who was behind the attack, the perpetrators seem to be exploiting the coronavirus crisis and the recent US bill to limit President Donald Trump’s ability to wage war against Iran for two goals: forcing US troops to leave Iraq and preventing Trump from being reelected for a second term.

Many Iranian officials including Foreign Minister Mohammad Javad Zarif said following the assassination of Gen. Qasem Soleimani that the “end of the US' malign presence in West Asia has begun.” Iran is clearly aware that a second Trump term means more “maximum pressure” of the kind that has already destroyed the Iranian economy and significantly affected Iran's regional presence.

This all is taking place in conjunction with a wave of attacks against the militias' offices in the southern provinces. Several offices belonged to Asa'ib Ahl al-Haq and other pro-Iran militias were burned in Maysan and Dhi Qar provinces in the last few days after activists and coordinators among the protesters were killed or abducted.