The assassination of an Iraqi expert on militias and extremist groups has raised already heightened security concerns in Iraq. 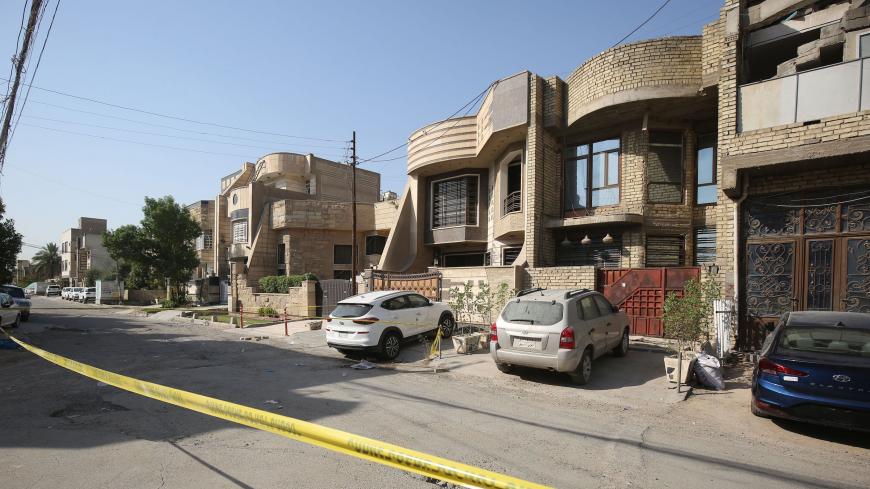 A general view shows the location where Iraqi jihadism expert Hisham al-Hashimi was shot dead yesterday outside his house in the Iraqi capital Baghdad's Zayouna district, on July 7, 2020. - AHMAD AL-RUBAYE/AFP via Getty Images

Hisham al-Hashimi, an internationally known Iraqi expert on extremist groups and militias in Iraq and Syria, was assassinated in front of his house in Baghdad's Ziyouna district in the early evening July 6. Hashimi was shot dead by two gunmen while he was leaving his house.

Hashimi was jailed as an opposition figure under Iraqi dictator Saddam Hussein. After Hussein's overthrow in 2003, Hashimi led several research projects on the Islamic extremist groups, including the books “History of al-Qaeda in Iraq” and “Organization of the Islamic State from Within.” He was a valuable source of analysis on the extremist groups in Iraq and Syria, and Iraqi politics more broadly, for many leading media and research centers, including Al-Monitor, and had a reputation for honesty and integrity throughout Iraq.

Hashimi's assassination was widely condemned by various parties, including the United States, the United Kingdom and the United Nations, in addition to Iraqi and Iranian governments and Iraqi Kurdistan.

Hashimi had recently been researching militia activities in Iraq targeting US bases and state facilities and was himself threatened by the militias several times. However, he nonetheless had maintained a good relationship with the leaders of the Popular Mobilization Units, including Abu Mahdi al-Muhandis, who was assassinated with Iran top commander Qasem Soleimani early this year.

The PMU have also denounced Hashimi's assassination, calling him a colleague who was assassinated by terrorist groups.

Immediately after the attack, Iraqi Prime Minister Mustafa al-Kadhimi pledged to pursue and bring Hashimi's killers to justice, and dismissed the commander of the First Division of the Federal Police, Brig. Gen. Mohamed Qassim, indicating possible police involvement in the attack.

Iraq's interior minister has formed a special investigation team to find the perpetrators.

The Iraqi president and parliament speaker were among many other Iraqi officials who condemned the incident, calling upon the government to stop the militias and extremist threats against Iraqi figures.

The Islamic State’s Amaq News Agency claimed responsibility for the killing. However, many Iraqis, including Hashimi's colleagues, are questioning the idea of IS involvement, pointing fingers at the militias that have attacked Hashimi over social media for his criticism of their activities against the Iraqi state and the foreign diplomatic missions in Iraq.

In a recent interview, Hashimi slammed PMU leaders and their political allies for protecting militants that must be prosecuted. Hashimi was also a supporter of the protests against corrupt Iraqi political parties.

The assassination comes amid a security decline in Baghdad, as anti-US militias are increasing rocket attacks against the US Embassy and US military bases.

A group of Kataib Hezbollah militants were arrested last June for preparing an attack against US bases, but they were soon released under pressure from the militia.

It seems that the militias are going on the offensive against the Iraqi prime minister to create obstacles to his reform plans, especially in the security field. Kadhimi has been replacing many security officials to enhance the state's efforts against the militias and their targeting of foreign diplomatic missions.

He replaced the head of security for the Green Zone after Kata'ib Hezbollah was able to penetrate the area and gather to demand the release of their members.

Kadhimi's reform efforts have stirred the ire of the Iranian Revolutionary Guard Corps. Mehr News, an Iranian news outlet close to the IRGC, has blasted Kadhimi for his actions during the last two months against the PMU, calling his reform plans an anti-Iran agenda. Kadhimi is working to maintain a good relationship with the Iranians and is trying to build strong ties with all Iraq's neighboring countries, including Iran, to avert clashes on Iraqi territory.

He has launched a strategic dialogue with the United States, the first session of which took place in June. Kadhimi himself is supposed to lead the second round in his upcoming visit to the United States.

Kadhimi is trying to ease Iran-US tension to shield Iraq from a spillover of confrontation. Iraq has become a battleground between the United States and Iran after the Americans killed Iran's top commander early this year, followed by Iran bombing the US military base of Ain al-Asad in western Iraq.

However, the militias insist on the immediate expulsion of US troops from Iraq before engaging in any dialogue.