Hitting military bases in Baghdad and other areas, armed groups linked to Iran continues to call for revenge for the January killing of their former leaders Qasem Soleimani and Abu Mahdi al-Muhandis. 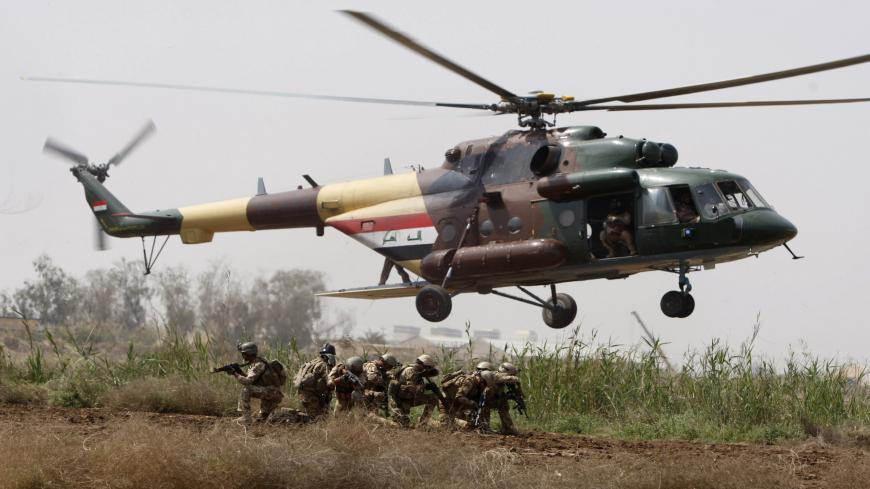 Iraqi soldiers take position as they disembark from an MI171 helicopter during a joint land and air training with US soldiers from the 1st Air Cavalry Brigade at Camp Taji, 25 kilometers (15.5 miles) north of Baghdad, Iraq, March 29, 2010. - AHMAD AL-RUBAYE/AFP via Getty Images

The two rockets that hit Baghdad airport July 30 were one of several attacks in Iraq last month presumed to be or declared by Shiite armed groups against any Western military presence in the country.

The airport, which had reopened July 23 for commercial flights after it was closed in March in an attempt to stem the coronavirus pandemic, lies just west of the capital. No significant damage resulted; the rockets had reportedly been shot from two different areas along an international highway in al-Radwaniyah, southwest of the capital.

On July 28, some media sources had been told by unnamed “Iraqi security” that two rockets had landed inside the airport but had not resulted in any damage. The claim was shortly thereafter denied by the Iraqi Security Media Cell, which instead confirmed exactly such an attack two days later.

The latest of many attacks on Camp Taji, on July 27, less than 30 kilometers (19 miles) north of Baghdad, meanwhile damaged an Iraqi helicopter but did not affect coalition troops or facilities.

Several attacks in recent months have been claimed by “new pro-Iran groups” that some say may instead be unofficial branches of Kataib Hezbollah, which has brigades within Iraq’s official government Popular Mobilization Units (PMU), but which was declared a terrorist organization by the United States in 2009 and has long received support from Iran.

Al-Monitor tried to get in touch with a number of PMU commanders and a PMU spokesman, and even though in the past they had commented, they said they could not respond to questions relating to recent attacks and prominent Shiite armed groups’ call for "revenge" for the deaths of Iranian Gen. Qasem Soleimani and Kataib Hezbollah leader Abu Mahdi al-Muhandis, who were killed by a US drone strike next to the Baghdad airport Jan. 3.

Many factions within the PMU are linked to parties in the parliament and political jockeying is expected the coming months ahead of early elections scheduled for June 2021.

A message requesting comments from Kataib Hezbollah spokesman Jaafar al-Husseini was left unanswered. However, Husseini had told Al-Monitor via WhatsApp June 29 that there would be severe consequences for the raid of Kataib Hezbollah headquarters by the Iraqi Counter-Terrorism Services, which have received training and extensive support from the US-led international coalition.

Husseini noted that the various factions close to Iran as part of "the axis of resistance" would continue “to put pressure on the Americans to leave after the decision from the parliament,” and after “millions took to the streets to say they want the Americans out [after] the crimes they committed — like the airport crime and the attacks on the PMU.”

He claimed that “this will lead us to take action in order to stop the government’s unlawful measures," vowing that “the Americans and [Prime Minister] Mustafa al-Kadhimi should know that Iraq will not be for the Americans or the Israelis or the oil countries,” in reference to Gulf nations.

A June 29 tweet by the Iraqi security and counterterrorism expert Hisham al-Hashimi, about a week before his assassination, had asked the question of what the factions of "the axis of resistance" meant when they said that “they are under the command of the commander-in-chief of the armed forces” and “his security and military vision,” when they circulated photos of Kataib Hezbollah fighters who had been arrested stomping on the face of the commander-in-chief, the prime minister, as soon as they were released after their arrest.

Hashimi, whose killers have not yet been found but who had received threats from Kataib Hezbollah prior to his death, said that these factions were thus “deceiving themselves and their audiences.”

PMU officially created in 2014 — when Grand Ayatollah Ali al-Sistani issued a fatwa calling on Iraqis to fight in unison against the Islamic State (IS) after they took control of Mosul — not close to Iran will comment much on the killing of Soleimani other than that any assassination by a foreign country on Iraqi soil should be answered for. The death of PMU leader Muhandis was seen by some as a major loss, in part due to his ability to exercise control over a wide variety of disparate armed groups.

The commander of one Sunni PMU faction, which had received support from Iran via Muhandis to fight against IS post-2014, told Al-Monitor earlier this year that Muhandis was "the soul of the PMU.” The commander, Sheikh Wennas al-Jbara from Salahhuddin province, widely praised Muhandis in an interview at one of his outposts near the Hamreen Mountains in March. However, he carefully sidestepped questions specifically about Iran and the United States, simply saying he was “against any foreign interference on Iraqi soil.”

The situation seems extremely dangerous for anyone who might voice a different opinion, as Hashimi’s assassination shows.

One concern is that these attacks by Shiite militias on Iraqi government facilities seen as close to the international coalition will negatively impact the fight against IS sleeper cells, including near the capital.

On the damage to Iraqi bases hosting or previously hosting international coalition troops, international coalition spokesman Col. Myles B. Caggins III told Al-Monitor in a WhatsApp voice message July 29 that "their effect on the fight against IS is somewhat limited. What is more important, more egregious and more dastardly about these attacks is that the groups — who are doing these attacks [and] are under different names — are once again harming Iraqi people. This is Iraqi equipment flown by Iraqi pilots for the fight to ensure that ISIS does not harm Iraqi people. So the question is why are these attacks happening on Iraqi security force bases. And it is clear that the government of Iraq is making strong statements about these outlawed groups and working quite intensely to find the groups and bring people to justice.”

He stressed that "the relationship between the government of Iraq and the coalition is strong and any groups that are envious of that relationship … perhaps their motivation is not fully aligned with defeating ISIS. I don’t know, I can’t speak for those groups.”

The continuing attacks may force the coalition troops to shift more to defending themselves and to supporting areas where they feel more welcome as they continue their drawdown.

Whether this will result in greater independence for Iraq, as Kataib Hezbollah claims, or the opposite — along with more IS activity and less potential investment and aid in a country desperate for both — will become clear in the coming months.