Iraqi Prime Minister-designate Adnan al-Zurfi is struggling to secure the needed parliamentary votes for his Cabinet. 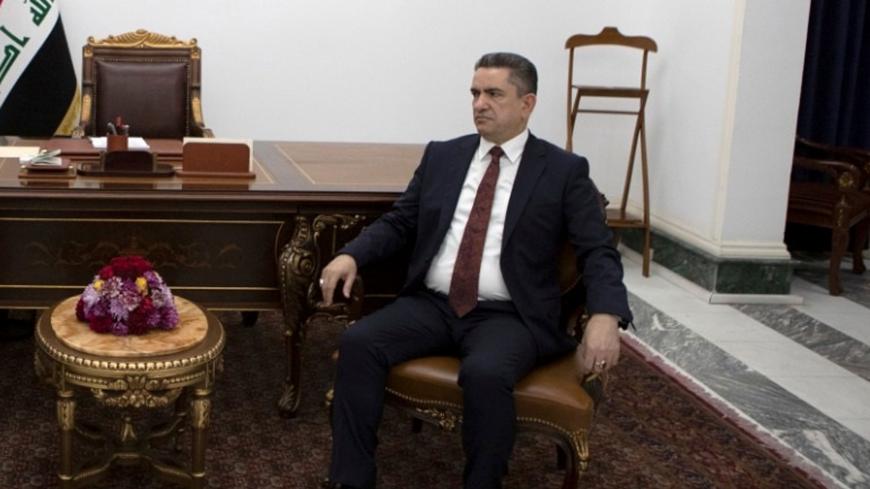 As Iraq's Prime Minister-designate Adnan al-Zurfi struggles to secure adequate parliamentary votes for his candidacy, Iraqi political parties are uncertain about whether they should support him, find a new candidate or even keep caretaker Prime Minister Adel Abdul Mahdi in office.

President Barham Salih nominated Zurfi on March 17. He must now form a Cabinet and obtain parliamentary approval for that Cabinet by April 17 to become prime minister.

Unlike the previous prime minister-designate, Mohammed Tawfiq Allawi, who failed to form a Cabinet due to a lack of parliamentary support, Zurfi is the leader of the Nasr parliamentary bloc, headed by former Prime Minister Haider al-Abadi. However, this bloc is small, made up of 27 members, which means Zurfi must negotiate with other political parties to secure votes, especially since Iraqi political parties are prone to changing their decisions in the blink of an eye.

Zurfi knows he cannot obtain Kurdish and Sunni support without securing the Shiite camp, which has held the premiership since 2004. Therefore, he has approached Shiite parties to make sure they do not turn their back on him when it comes time to approve his cabinet. If the Shiite parties withdraw support, that would most likely lead to a Sunni and Kurdish withdrawal of support.

However, this assessment does not seem accurate. Two parliamentary blocs — the Fatah bloc of the Popular Mobilization Units (PMU), and Nouri al-Maliki's State of Law, which have about 70 seats — still oppose Zurfi. They are trying to nominate a new candidate while accusing Barham of acting unconstitutionally in his appointment of Zurfi.

Yet it is still difficult for the PMU and its allies to find a candidate to replace Zurfi. The appointment of Zurfi, who is close to the United States and opposes Iranian influence in Iraq, caught the PMU by surprise. But its adherents believe they can block parliamentary approval for his cabinet. They, therefore, support keeping Abdul Mahdi in office until early elections are held.

Qais al-Khazali, the leader of the Iran-backed Asaib Ahl al-Haq militia, described Zurfi as a “corrupt” candidate. Khazali called for granting more powers to Abdul Mahdi’s government and announcing a state of emergency in response to the spread of the novel coronavirus in Iraq.

“Iran's allies have no interest in seeing Abdul Mahdi stepping down,” Ihsan al-Shammari, director of the Baghdad-based Iraqi Center for Political Thought, told Al-Monitor. “This is because such a thing would greatly shake the influence they acquired under his rule.”

“Abdul Mahdi leaving his post would result in President Salih running the government," Shammari said. "[Salih's] positions are not consistent with the [Iran-friendly] policy that the parties who want Abdul Mahdi to stay have adopted. … Salih assuming this responsibility would result in pro-Iran parties being greatly exposed. This is why they are pushing toward Abdul Mahdi remaining in his post.”

But Abdul Mahdi voluntarily stepped away from his caretaker position on March 2. He does not seem willing to return unless parliament were to approve him and his cabinet, which is unlikely due to strong objections from protesters.

Abdul Mahdi took this "voluntary absence" in November 2019 due to pressure from protesters, who demanded a competent government and public services. Yet he continued to serve until a new government could be formed. Typically, the prime minister heads the Council of Ministers, or Cabinet, yet when Abdul Mahdi left office, he handed over the reins to Finance Minister Fuad Hussein — a controversial move since it may be unconstitutional.

Abdul Mahdi said he stepped aside to avoid a constitutional and administrative vacuum. “Abiding by the relevant constitutional articles would be the best solution,” he said, stating that he consulted legal experts to ensure he was taking the right action. Not everyone agrees, however, that his moves were legitimate.

Qassem Abboudi, a political analyst at Nabad Center for Strategic Studies, told Al-Monitor that Abdul Mahdi’s stepping away aimed to send “the political class that failed him in the middle of his rule the provocative message that there is no alternative" to replace him.

Shammari said that Abdul Mahdi took leave from the post as opposed to resigning because "remaining in his post would provide him with personal and political immunity.” This also explains why he wants renewed parliamentary approval to return to the office.

The Sunnis appear to be happy with Zurfi, so long as he is close to the United States and keeps his distance from Iran. However, even some Sunni groups are under Iranian influence, and it's difficult to imagine them supporting a prime minister who opposes Iran.

A well-informed source close to Iraq's ruling elites told Al-Monitor, “Zurfi will fail to gather the needed vote in the Iraqi parliament to pass his cabinet, since Iran’s strategy is keeping Adel Abdul Mahdi until the next parliamentary elections in 2022.” The source added, “So far, Zurfi enjoys Kurdish and Sunni support, but no one in Iraq wants to make Iran mad yet.”

There are also those among Sunnis who want Abdul Mahdi to stay in office until early elections are called. General elections are currently scheduled for 2022, but protesters have demanded they be held this year.

Mohammed Dahhan, spokesman for the Salvation and Development Front, told Ahd TV on Feb. 21 that Parliament Speaker Mohammed al-Halbusi, who stands to lose his position in an election, wants the caretaker government to remain in place.

Mahmoud al-Hashemi, secretary of the Iraq Media Observatory, told Al-Monitor, “Abdul Mahdi believes that he has the support of Sunni forces, in addition to the Kurds, and not to mention the majority of the Shiites.” He added that Abdul Mahdi seems to be the only one who can address the interests of all three groups.

Though Kurds have said they would not make a deal with Zurfi until he secured Shiite votes, they are already negotiating regional interests with him.

The Kurdistan region is currently on the brink of financial collapse due to the fall in international oil prices. The region's four provinces are locked down due to the coronavirus, and the government needs urgent support from Baghdad as well as negotiations with Zurfi.

Amin Baba Sheikh, the spokesman of the Patriotic Union of Kurdistan, told Al-Monitor, “We are ready to make joint coordination with all the Kurdish political parties in order to jointly negotiate with Zurfi in Baghdad and safeguard the interests of the people of Kurdistan.”

He continued, “Formation of a new government and stabilizing Iraq is a priority for us. We think key issues of the Kurdistan region’s share from the federal budget, salaries of the [Kurdistan Regional Government] employees, including the peshmerga forces, and Iraq’s hydrocarbon law are more important than the posts of a minister, an adviser or a general director.”

Baba Sheikh is sure that parliament will approve Zurfi's Cabinet.

“Zurfi is a pragmatic man,” said Sarkawt Shams, a Kurdish lawmaker from the Future bloc. "Zurfi is now making a series of public and secret meetings with the political sides. As for now, Zurfi has more supporters than opponents."

Shams added, “If tensions between the US and Iran do not further escalate, Zurfi is expected to present his cabinet within the one-month period, because the oil price collapse coupled with the spread of coronavirus did not leave any room for presenting another candidate to form a new Iraqi government.”