Iraqi Prime Minister-designate Mohammed Tawfiq Allawi is under great pressure from the protesters to withdraw from the position, opening the space for a candidate acceptable from all sides. 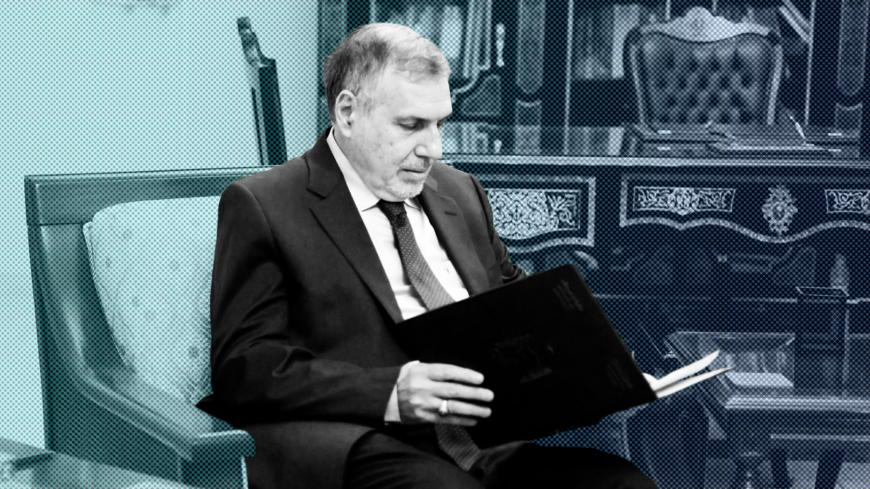 Iraq's newly appointed prime minister Mohammed Tawfiq Allawi has a difficult task ahead as he seeks to form a new government. He is facing widespread lack of confidence from public protestors, as well as ongoing pressure from the country's traditional political forces to adhere to their terms.

Iraq’s most senior Shiite cleric, Grand Ayatollah Ali al-Sistani, hinted during his Friday sermon that he may have concerns about Allawi's ability to successfully form a government. The sermon was delivered Feb. 7 on Sistani’s behalf by his representative Ahmed al-Safi.

“The new government must earn the people's trust, be capable of calming the situation and restoring the prestige of the state,” Safi said. This position comes at a time Allawi is facing considerable rejection from the Iraqi public.

Kadim Isawi, senior adviser to Shiite cleric Muqtada al-Sadr, also warned Allawi to not appoint any minister from the Popular Mobilization Units, threatening that Sadr will overthrow Allawi's Cabinet in three days if he does so.

A day before Sistani’s sermon, Allawi threatened to refrain from fulfilling the task he was entrusted with if the attacks on protesters continued. This comes in tandem with attacks on protesters in Najaf by the supporters of Sadr’s movement known as the Blue Hats group. Sadr played a key role in naming Allawi as prime minister-designate.

Rahman al-Jubouri, senior researcher at the Regional Center of the American University of Iraq, Sulaimaniyah, agreed that Allawi has a very difficult task. “The process of forming an independent government in the midst of this tremendous pressure from the street and from the political parties that support him in public while pressuring him behind the scenes will be almost impossible.”

He added, “There is a regional war raging inside Iraq. The West seeks to break Iran's hegemony over the country while Iran wants to dominate it. I don't think Allawi will pass the vote of confidence test. If he aligns with the traditional powers he will find himself in conflict with the street with no [political] cover.”

Allawi is the first Iraqi prime minister to be rejected by the street before being officially tasked to head the government. His photos, bearing the mark X, were brandished in Tahrir Square in central Baghdad and in other protest squares in the central and southern provinces. This has not happened before with his predecessors.

Protesters have been chanting against him in the squares for more than two months. This echoes the great rejection that Allawi is facing at the grassroots level, in a challenge that no official in the Iraqi state had previously faced.

“Allawi will be in a quagmire. If he decides to get the support of all the major blocs he would have to yield to their terms,” Kawa Hassan, Vice President of the Middle East and North Africa program at the Brussels-based East-West Institute, told Al-Monitor. “This would take us back to the quotas system, which is the main problem plaguing the current political system.”

He added, “There is a large possibility that Allawi fails to form a government. His situation is fragile, especially in light of the continuing attacks on the protesters.”

Allawi was not spared the threat of political blocs of withholding their vote for his government. On Feb. 5, the State of Law Coalition led by Nouri al-Maliki, with 25 seats in parliament, threatened to withdraw confidence from him if he forms a government imposed on him by the political parties, according to a press release issued by Ali al-Baiji, a member of parliament for the coalition.

According to Kifah Muhammad, adviser to Kurdistan Democratic Party chief Massoud Barzani, Allawi is under great pressure from the political blocs. He wrote on Twitter Feb. 4, “If Allawi refrains from forming a government, it will not be because of the protesters but rather because of pressure from the parties seeking to secure their quotas of ministries and positions.”

Farhad Alaaldin, head of the Iraqi Advisory Council, believes Allawi is up for hard and difficult negotiations with the political forces. He explained that the political forces are keen on getting their electoral representation, which may contradict what Allawi proposed in his government program.

He told Al-Monitor, “The rumors about Allawi reneging on his task to form a government are incorrect and not possible at the present time. He still enjoys the support of the main powers, but he said he would pass on forming the government if he finds himself forced to make specific choices imposed on him.”

Allawi’s nomination as prime minister-designate came contrary to the specifications set by the protesters in Iraq. Protesters reject naming any figure having previously assumed any public office, holding a non-Iraqi nationality or affiliated with any political party. Allawi, a former minister of communications in Maliki’s government from 2006 to 2014, holds non-Iraqi citizenship.

To this date, Allawi’s position remains fragile and he may not be able to fulfill the task assigned to him. Political blocs could abandon him at any moment as he was not nominated by the largest parliamentary bloc, nor was he named by the protesters. He seems to have become prime minister-designate just like his predecessor Adel Abdul Mahdi who was nominated as a result of a deal between the Fatah Alliance led by Hadi al-Amiri and the Sairoon Alliance led by Muqtada Sadr.

Hussein Allawi, national security professor at Nahrain University, told Al-Monitor, “The rejection of Allawi by most of the Iraqi people and young protesters would weaken the political forces’ insistence on seeing him form the government.”

Most likely Allawi will not succeed in forming his government. If he does succeed, his government will be deficient or rejected by the street and the supreme Shiite authority Sistani. All available indicators show that he will end up losing support, either from the street or from the political forces. Either way, Allawi could be heading toward an impossible mission.