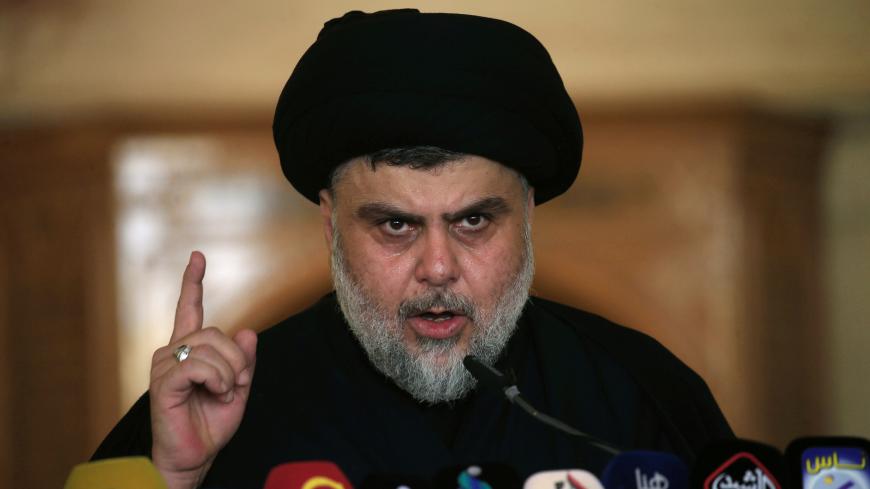 Muqtada al-Sadr delivers a sermon to worshippers during Friday prayers at the Great Mosque of Kufa near Najaf, Iraq, Sept. 21, 2018. - Reuters/Alaa Al-Marjani

The most recent name to surface as a likely candidate for Iraq's premiership is Adel Abdul Mahdi, a former head of the Ministry of Oil and Ministry of Finance and a one-time vice president of the country. Following negotiations said to have involved Hezbollah, Mahdi now appears to have the support of two on-again, off-again rival parliamentary coalitions: the Sairoon Alliance of Shiite cleric Muqtada al-Sadr and the Fatah Alliance of Hadi al-Amiri.

The struggle to create a new Cabinet in Baghdad is indeed thought to be a US-Iranian competition, with each actor trying to end the game by claiming the upper hand. To Tehran, Baghdad isn’t just any capital in the region.

“Iran's approach to Iraq is influenced by a sense of complexity," Iranian political analyst Siavash Fallahpour told Al-Monitor. "There are some currents within the Iranian establishment who see that they have influence in Iraq, perhaps to the extent to make decisions on behalf of the Iraqis themselves.”

That's not the case with, for example, Syria, Fallahpour said. "It's clear that we are talking about something that goes beyond regional influence. It’s mainly about history: Since the [Ottoman-Safavid] Battle of Chaldiran in 1514, Iran has been trying to get Iraq back on its side, and this opportunity came to life again … after the US withdrawal [which began in late 2007]."

The apparent Sairoon-Fatah compromise may have begun, at least in part, in Lebanon, which is Sadr’s favored travel destination and where his family hails from. The Iraqi cleric attended an important meeting there in early September, according to a Lebanese political source who spoke to Al-Monitor on condition of anonymity. Sadr visited Hezbollah chief Hassan Nasrallah, and they were joined by Maj. Gen. Qasem Soleimani, the commander of Iran’s special forces unit, Quds Force. The three discussed possibilities to reach an agreement — and ultimately did agree on Mahdi as a candidate for prime minister. The Lebanese source said the trio’s main objective is “preventing the United States from ruling Iraq once again.”

The Beirut meeting came in parallel with direct Iranian coordination with the supreme Shiite clerical authority in Iraq, Grand Ayatollah Ali al-Sistani. According to an Iraqi political source in Baghdad, Sistani’s main concern is preventing the country from entering an intra-Shiite civil war. The source, who also spoke to Al-Monitor on condition of anonymity, said, “The current political leadership showed a lack of wisdom in dealing with challenges. Therefore it was left with few backers. Besides, the [Islamic Dawa Party] has been ruling the country for the last three rounds of elections, and it’s time for change.”

In a Sept. 10 statement, Sistani called for the selection of a new prime minister who is competent and courageous, and said he "will not support any new prime minister chosen from the politicians who have been in power in the past years — whether he was affiliated with a party or independent."

According to Tehran University professor Mohammad Marandi, Sistani has prevented the United States from establishing an anti-Iranian government in Iraq. Marandi told Al-Monitor, “In the eyes of Iran’s friends in Iraq, the United States wanted to sacrifice Iraqi interests to hit Iran. Ayatollah Sistani presented an argument that the Iraqis need to break from the past to have a new figure on the top to deal with issues in the country that the former government failed to deal with, and by extension, he succeeded in preventing the United States from creating a very dangerous situation in Iraq and attempting to create hostility between Iraq and Iran.”

However, the Dawa Party also held an important meeting. On Sept. 22, the party met in an effort to unite the backers of rivals Abadi and former Prime Minister Nouri al-Maliki, to strengthen the party's position and regain initiative toward getting someone from Dawa nominated for prime minister. It's unclear if the effort will be enough to change anything in the compromise the Sairoon and Fatah alliances appear to have reached.