Segments of the Popular Mobilization Units close to Iran are forming an alliance to participate in Iraq's upcoming elections. 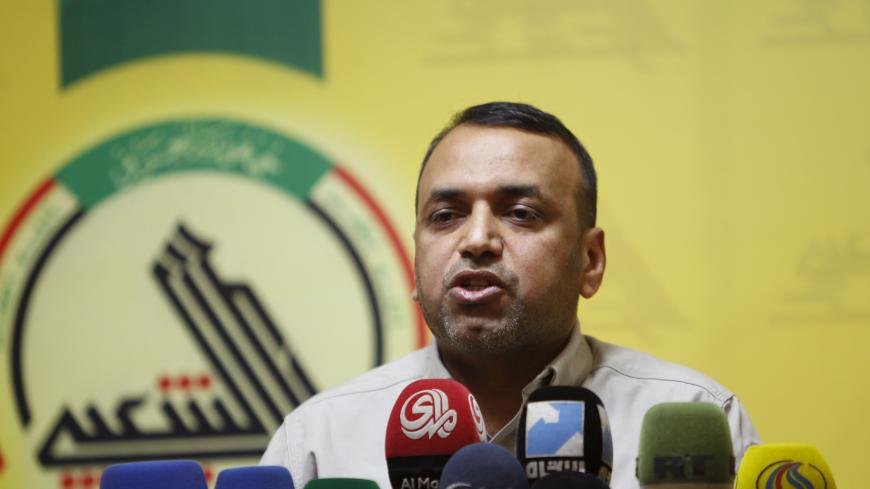 Ahmed al-Asadi, who recently resigned as spokesman for the Popular Mobilization Units to become spokesman of what some are calling the Mujahedeen Coalition, addresses a news conference in Baghdad, Iraq, July 2, 2015. - REUTERS/Ahmed Saad

As the Iraqi parliamentary elections set for May draw nearer, many Iraqis are concerned about the potential participation of a coalition of pro-Iran political and military movements.

Ahmed al-Asadi, the secretary-general of Kata'ib Jund al-Imam (Imam's Soldiers' Battalions), announced Nov. 28 the launch of the Mujahedeen Coalition. The alliance comprises the main political factions whose volunteers and leaders helped form the Iran-backed Popular Mobilization Units (PMU). Asadi also announced he was resigning as PMU spokesman to instead serve as the Mujahedeen Coalition's spokesman.

He said the coalition includes “political figures who will defend the Iraqis in the political process by selecting popular cadres" that helped defeat the Islamic State (IS). This comes despite Iraqi Prime Minister Haider al-Abadi's recent statement that representatives of armed groups will not be allowed to participate in the elections. To conform to that requirement — or as some believe, to skirt the rule — some PMU military leaders such as Asadi have been resigning their positions to enter politics.

Naim al-Abudi, a spokesman for Asaib Ahl al-Haq, told Al-Monitor the names of some of the forces participating in this coalition. In addition to his group, the coalition is to include major PMU factions such as the Badr Organization and the Hezbollah Brigades. Media reports also say numerous other factions close to Iran have joined the coalition.

Other armed Shiite factions that are not closely tied to Iran said they do not intend to join the political arena. For example, forces close to the country's highest Shiite authority, Ali al-Sistani — such as the Abbas Combat Division, the Imam Ali Brigade, the Ali al-Akbar Brigade and the Ansar al-Marjaiya Brigade — did not form political wings.

In addition, Muqtada al-Sadr, leader of the PMU faction Saraya al-Salam, in April banned his fighters from participating in the parliamentary and local elections out of fear the men would “waste their efforts in the abominable political arena.” Sadr has become more independent of Iranian influence.

There are clear differences among the various forces expected to form this coalition, and this is perhaps reflected in their difficulty in simply agreeing on a name. Though Asadi had publicly referred to the Mujahedeen Coalition, Karim al-Nuri, leader of the Badr Organization, strongly criticized the name in a statement published Dec. 1 by Alsumaria News.

"Jihad and mujahedeen are great titles that cannot be involved in political movements … and they cannot be exploited for political purposes surrounded by interests and corruption,” Nuri said.

Some reports suggest the group might take the name the PMU Coalition. Abudi said no final decision has been reached, but added, “There is no way the coalition will be named the Mujahedeen Coalition.” Meanwhile, others are sensitive about the use of the PMU and its name as a card in the electoral contest.

Sistani’s spokesman stressed Dec. 15 that the PMU should not be used to achieve political ends.

The commander of the PMU's Abbas Combat Division, Maitham al-Zaidi — a figure close to Sistani — launched an attack on those who would use the PMU in the elections. He said in a TV interview Dec. 17, “There are politicians who are seeking to use the PMU to make calculated gains.”

He added, “I think that these clearly show how [Sistani’s] orders and the constitution are being disobeyed.”

Despite some military leaders' resignations from the PMU, many opponents fear the leaders will retain their influence with PMU military factions. The opponents point to what happened after the fall of Saddam Hussein, when Shiite factions that integrated into the regular Iraqi security forces more or less maintained their independence.

On the other hand, some of these groups have sought to avoid some potential sensitivities; Abudi told Al-Monitor that the coalition doesn't intend to compete for the post of prime minister. “This coalition does not have its eye on the premiership but will be part of other coalitions that have an influential opinion in the choice of prime minister,” he said.

Abudi also said that while these forces oppose the US presence in Iraq, they seem to have come to a separate peace of sorts with it.

“Our position reflects that of the Iraqi people, the government and the parliament in rejecting the US combatants or bases,” he said. “We want the Iraqi government to have relations with and be open to all countries, but there should be no US military bases in Iraq territory."

While these forces have said the US military presence in Iraq should end following the defeat of the Islamic State, they apparently are beginning to realize and acknowledge US influence in the election and accept it as reality.

In sum, the forces close to Iran are seeking to establish a political presence in Iraq despite many reservations about their performance. Should these groups win the elections, Iran’s influence in Iraq will significantly increase.