A bold move by PMU groupings aligned with Grand Ayatollah Ali al-Sistani is set to challenge the level of influence of pro-Iran militias in Iraq. 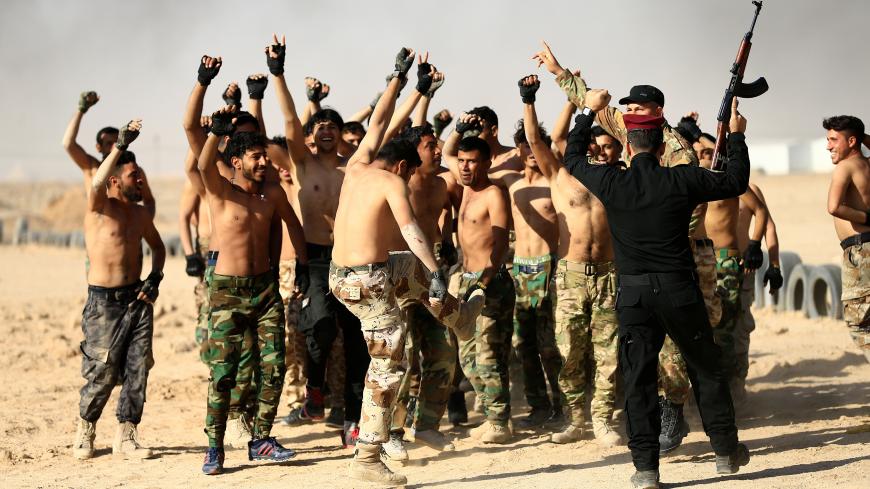 Four Iraqi militant groups affiliated with Ayatollah Ali al-Sistani, the highest Shiite authority in Iraq, said they are withdrawing from the Popular Mobilization Units (PMU) in a move that could result in a shake-up of the military organization. The four paramilitary forces, usually called the Shrine Units, are known to have an uneasy relationship with Iranian-backed militant groups in the country.

In a joint statement issued April 23, the Abbas Combat Division, Imam Ali Combat Division, Ali Akbar Brigade and Ansar al-Marja’iya Brigade said their transfer out of the PMU was authorized by a decree signed by outgoing Prime Minister Adel Abdul Mahdi, who also is the commander in chief of the armed forces.

According to the April 22 decree addressed to Faleh al-Fayadh, the Iraqi national security adviser and head of the PMU Commission, the four units will be directly under the commander in chief’s office, administratively and operationally.

One day after the Shrine Units’ joint statement, the commander in chief’s spokesman, Maj. Gen. Abdul Karim Khalaf, said that Abdul Mahdi was not consulted about the statement and that the decree is strictly about the administrative and operational arrangements of the Shrine Units. He said the prime minister does not approve of other details mentioned in the statement.

The most controversial piece of information in the joint statement is about the intention of the Shrine Units to help facilitate other forces to withdraw from the PMU. The statement says the command of the Shrine Units “is considering joining the rest of the forces and brigades that are willing to do so according to national criteria, legal structures and constitutional obligations.”

The pro-Iran groups understand the gravity of this development. A source close to the Shrine Units told Al-Monitor on condition of anonymity that Hadi al-Amiri, head of the Badr Organization, the largest pro-Iran group in Iraq, who also leads the Fatah Alliance in parliament, went to visit two of the most important of Sistani’s representatives, Ahmad al-Safi and Abdul Mahdi al-Karbalai, to coax them out of their decision to part ways with the PMU Commission. In this April 26 meeting, Amiri promised the Shrine Units better positions in the PMU Commission and to pay greater attention to the Shrine Units' perspectives in the PMU Council. The source did not say how Sistani’s representatives responded.  However, given the nature of the long-standing grievances of the Shrine Units, it seems unlikely they were convinced by this sort of promise.

Extending the olive branch has not been the only strategy employed by pro-Iran groups to deal with this serious development. Reacting to the news of the defection of the Shrine Units, Hamed Abbas al-Musawai, a Fatah Alliance member of parliament, said in a Facebook post published April 23 that any “drop of blood of the holy Hashd al-Shaabi’s [PMU] fighters shed by the hand of … the United States and Israel” would be blamed on people who try to "divide" the PMU. The Fatah Alliance is formed of political wings of Iran-backed militias in the PMU.

Iran-aligned social media activists and platforms have also been immensely critical of the Shrine Units' move, calling it a blunder committed for personal gains and whims.

The animosity did not stop at accusations. Reports came out April 24 of threats being sent to Shrine Units' commanders, indicating they could be killed should they refuse to stop dividing the PMU.

The Shrine Units' commanders did not capitulate to the threats. Hamid al-Yaseri, the commander of Ansar al-Marja’iya Brigade, addressed “only the free people of Iraq” in a message posted on the brigade’s Facebook page April 25. He wrote, “Religion equals homeland. There is no value in [saying your prayers] if you are loyal to another country rather than Iraq.” Then, in a clear indication of the threats that he has received, he ended his message with a hashtag that reads “I am Iraqi, I don’t get frightened.”

Evidently, the Iran-backed militias believe that a valuable organization that has helped them consolidate their influence is at stake.

Since its formation in 2014, the PMU has benefited immensely from the religious legitimacy it has received from Sistani. After all, Sistani's edict to take up arms against the Islamic State's surge invigorated the idea of a paramilitary organization to support the collapsing Iraqi security forces at the time.

Nonetheless, Sistani’s instructions were clear. He asked all able men to join the fight under the security forces. Instead, Iran-backed militias labored to turn the military organization into an offshoot of the Iranian Islamic Revolutionary Guard Corps (IRGC).

This caused continuous friction between the Shrine Units and the PMU Commission, which has been controlled by figures loyal to the IRGC.

Splitting from the PMU takes away a great amount of the religious legitimacy the PMU has enjoyed for the past six years. It is not surprising that some Iran-affiliated media platform have been trying to frame the Shrine Units' defection as a move done on individual commanders' accord without the approval of Sistani.

Needless to say, they will have a hard time convincing the Iraqi Shiite general public and thousands of fighters who joined the organization to answer Sistani’s call that such is the case.

The defection process was not an abrupt one. The Shrine Units have been publicly talking about a major restructuring for a while. The commanders of the four units met with Ahmad al-Safi, Sistani’s confidant, March 19 to receive his instructions on the plan to restructure the units. He emphasized that the whole process needed to be done according to the national interest, clearly distancing himself and Sistani from units loyal to Iran. Safi also criticized those who “grant all the benefits to those who agree with them and deny those who disagree with them any advantages.” He added, “How can one work with these people?”

The Shrine Units have long complained about the PMU Commission’s "unjust" distribution of the organization’s resources.

Splitting from the PMU under the Sistani’s confidant’s instruction, with great emphasis placed on following Iraq’s national interest, is a clear message that Sistani is not content with the pro-Iran organization. This could prove to be a serious blow to the militias, which brand themselves as the defenders of the Shiite ummah (community) and its values.

In these circumstances, it is not surprising that Iran-backed PMU groups fear that more militant groups will join the Shrine Units in splitting from the PMU Commission. According to an unconfirmed report published April 26, 10 other groups are contemplating defection from the PMU. This is in line with the Shrine Units' admission that they will try to help other PMU groups split and to take on a "reformation" endeavour.

Losing the legitimacy bestowed by Sistani’s approval will not harm the pro-Iran groups just in the military sphere. In politics, they can lose some of their support among Shiite constituents. Some of the pro-Iran PMU militias such as the Badr Organization and Asaib Ahl al-Haq are major players in parliament. In the last parliamentary elections, they used their role in fighting the Islamic State as a selling point to gain votes. The fact that Sistani is not satisfied with their performance within the PMU can be read by the Shiite public as an indicator of his dissatisfaction with their political performance, too, setting the table for them to lose some of their constituents.

All of these developments are happening while the Iran-backed groups are suffering from the loss of Iranian Maj. Gen. Qasem Soleimani, the commander of the IRGC's Quds Force, and PMU leader Abu Mahdi al-Muhandis, who were assassinated by the US military in early January. Brig. Gen. Esmail Ghaani, Soleimani’s successor, has not been able to fill the void left by Soleimani’s departure just yet.