As Iraq's political parties have failed to form a new government, unrest continues in Basra, where hundreds of people are being hospitalized each day due to a lack of basic services, especially clean water. 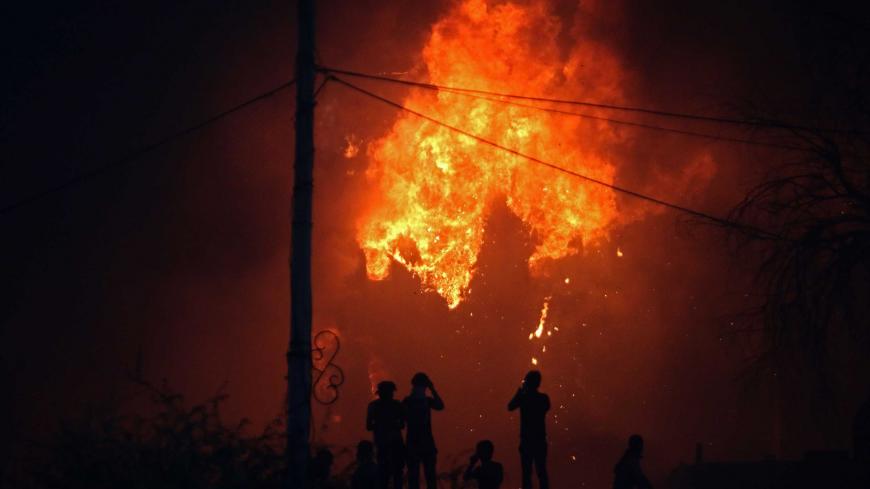 Iraqi protesters watch an official building burn as they demonstrate against the government and the lack of basic services in Basra, Iraq, Sept. 6, 2018. - HAIDAR MOHAMMED ALI/AFP/Getty Images

The zone is heavily fortified and no casualties were reported. But the attack comes amid bloody protests this week in the southern city of Basra, where so far more than 10 protesters have been killed. Dozens of protesters and members of the security forces have been injured.

The outgoing government hasn't addressed protesters' demands for basic services in Basra, and the legislature's political parties have failed to form a new Cabinet in the four months since the parliamentary elections took place.

Protesters on Sept. 6 attacked and set on fire political parties’ buildings in various areas of Basra province. The buildings mostly belong to pro-Iran parties. Asa'ib Ahl al-Haq, the Badr Organization, Hezbollah Brigades, Khorasani Brigades, Islamic Dawa Party and Hezbollah al-Nujaba are among the dozens of political parties whose buildings were set on fire. On Friday, protesters also set fire to the Iranian Consulate in Basra.

Faleh al-Khazali, a Badr Organization parliamentary representative from Basra whose office was set on fire, accused the US Consulate in Basra of being behind the violence and fires, and called on the Iraqi government to close the consulate permanently.

The Fatah Alliance demanded Sept. 7 that current Prime Minister Haider al-Abadi resign due to his failure to manage the Basra situation. Thousands of residents have been sickened by the high levels of salinity in their contaminated water supply.

It seems that by attacking the Green Zone, militias close to Iran are warning Abadi not to insist on serving a second term in office, and warning the United States not to interfere in forming the new government. The pro-Iran militias regularly targeted the Green Zone with mortars during the US presence in Iraq that ended in 2011.

No one so far has claimed responsibility for the recent mortar attack, which came two days after a group of pro-Iran militias threatened anyone trying to form a new pro-US and pro-Saudi government in Iraq. The group said it will target US troops in Iraq and overthrow the Abadi government.

"We look with anger at the illegal military presence of foreign forces in Iraq under any name, and we state clearly that our patience is limited and that we will deal with them as an occupying force and [it is] our legitimate right to use all means to get it out of our country," read a statement signed by 11 pro-Iran militias of the Popular Mobilization Units (PMU), including the Hezbollah Brigades, Badr Organization, Asaib Ahl al-Haq and Khorasani Brigades.

The statement alleged a conspiracy between Brett McGurk, US special presidential envoy to the international coalition fighting the Islamic State, and Saudi Minister of State Thamer al-Sabhan to "form a vulnerable government subject to external orders.”

The militias also targeted Abadi, saying: "Attempts by the outgoing government to undermine the [PMU elements] after the announcement of the election results by taking irresponsible actions to control the vital [elements] of the state beyond its constitutional powers through the dismissal and exclusion [of PMU leader Faleh al-Fayad] and dismantling [PMU factions] cannot pass without a suitable response from us."

Also on that day, Hadi al-Amiri, head of both the Badr Organization and the Fatah Alliance, threatened to overturn the incoming government if the United States influences its formation. The Fatah Alliance consists of pro-Iran PMU factions. Amiri's office issued a statement: "If you [McGurk] insist on your interfering, then we shall deem any government you [help] form as a collaborating government and we shall seek to overthrow it within a matter of two months.”

Abadi and his allies, including Sadr’s Sairoon Alliance and Ammar al-Hakim’s National Wisdom Movement, claimed Sept. 2 that they had the parliamentary majority necessary to form a new government. But the pro-Iran rival groups, which include the Fatah Alliance and former Prime Minister Nouri al-Maliki’s State of Law Coalition, are trying to dismantle Abadi’s alliance so they themselves can claim to hold the majority. That effort began with Fayad leaving Abadi’s Nasr coalition and taking eight other members with him to join the Fatah Alliance. Some reports said former Defense Minister Khalid al-Obaidi, a prominent Sunni leader, took seven other members from Nasr and joined Fatah after he was promised the defense minister position.

The Shiite militias called on Sadr to clarify his position and join their anti-US front. They also called on the Islamic Dawa Party to put an end to its leaders’ supposed irresponsible conduct, in reference to Abadi.

Local media reported some pro-Iran PMU leaders threatened to assassinate McGurk and are no longer obeying Abadi, who oversees Iraqi security forces, including the PMU.

Abadi has recently adopted tough positions against Iran. He announced his government would abide by some of the US sanctions against Iran, saying, “We will not risk the fate of our people to please Iran.” He also slammed Iran for cutting the water supply from the Karun River, which flows into Iraq’s Shatt al-Arab River. That action, he said, contributed to the water contamination in Basra.

All the aforementioned indicators show that even if Abadi manages to clear all the hurdles to serve a second term, he will face strong opposition from the pro-Iran parties and militias.