Pro-Iranian factions within Iraq's Popular Mobilization Units are taking advantage of the bloody events in Basra to prevent the prime minister from winning a second term, accusing him of being under US influence. 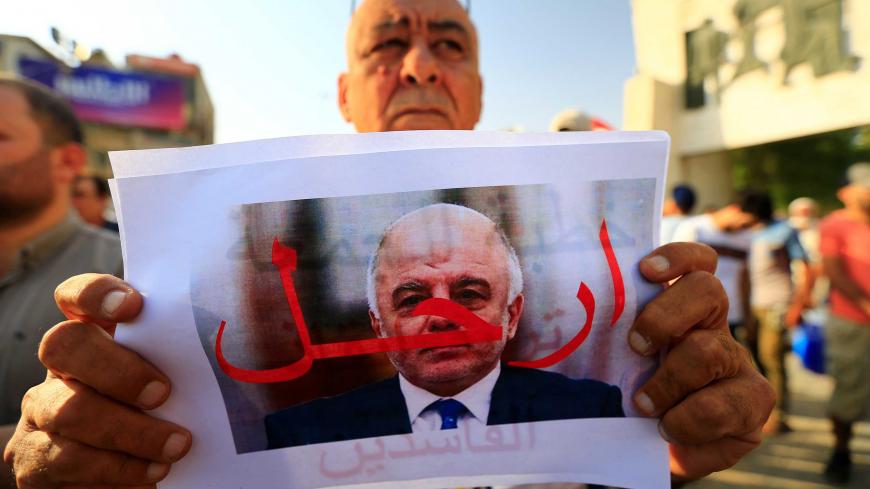 A protester holds a picture of Iraqi Prime Minister Haider al-Abadi with "Step Down" written on it during a protest at Tahrir Square, Baghdad, Iraq, July 27, 2018. - REUTERS/Thaier al-Sudani

Tension is rising in the conflict between embattled Iraqi Prime Minister Haider al-Abadi and the Popular Mobilization Units (PMU), as the United States and Iran vie for influence in the new government that lawmakers are struggling to form in Baghdad.

Legislators are still arguing over which coalition of political parties holds the majority of parliament seats; the top group will select the new Cabinet. The United States would like to see Abadi appointed for a second term as prime minister, but he is strongly opposed by members of the Fatah Alliance, which includes pro-Iranian factions of the PMU.

Anti-Abadi sentiment is escalating, compounded by rioting in Basra — even as Abadi announced Sept. 13 he would immediately begin implementing development projects to help remedy the dire situation there. Basra, Iraq's main port, is suffering from a lack of basic services. Tens of thousands of citizens have filled hospitals, sickened by drinking water that is heavily polluted and high in salinity. Abadi promised a new water-pumping system as well as filtration projects.

Basra protesters attacked many government buildings there last week, and a number of demonstrators were killed. These events have shed light on and deepened the gap between Abadi and the PMU. This is especially true considering that the Iranian Consulate was set ablaze Sept. 7, which raised the ire of parties and armed factions close to Iran.

On Sept. 9, PMU deputy head Abu Mahdi al-Muhandis accused the United States of “creating” chaos in Basra to somehow support the prime minister in his bid for a second term. On Sept. 12, Republican US senators announced they would seek to impose sanctions on Iran-backed factions of the PMU.

As PMU leaders blamed Abadi for the violence in Basra, Abadi responded by saying, “A political party with an armed wing is responsible for the fires that targeted several political party headquarters in Basra, and this party exploited the protests in the framework of a political conflict.”

The mutual recriminations indicate the size of the dispute that has been deferred for the past four years between the two sides. These accusations also indicate that Abadi failed to serve as a true leader of the PMU. The PMU was formed in 2014 as a parallel institution to the Iraqi army to help battle the Islamic State (IS). In 2016, Iraq formally recognized the PMU, and they reported directly to Abadi. But Muhandis, the actual commander of the PMU, recently said Abadi “had no role in fighting the Islamic State organization.”

Abadi’s dismissal of PMU head Faleh al-Fayad on Aug. 31 deepened his row with the PMU.

Muhandis isn't the only one casting blame on Abadi. Qais al-Khazali, secretary-general of PMU faction Asaib Ahl al-Haq, accused Abadi in a tweet of “burning Basra down” and said, “The plan will eventually backfire.”

Asked about his interpretation of the tweet, Mahmoud al-Robaie, spokesman for Asaib Ahl al-Haq's political bureau, told Al-Monitor that Khazali was referring to Abadi’s greed and desire for a second term. "This prompted [Abadi] to get involved in a project aimed at causing internal fighting in Basra while igniting a war among the people of one province,” he said.

Rahman al-Jubouri, a senior researcher at the Washington-based National Endowment for Democracy, told Al-Monitor, “There is a conflict between two camps. The first is led by Abadi and is seeking to build a state, while the second is led by the PMU leaders and is seeking to build a state of resistance that is run and led based on the whims of their leaders.” He added, “This conflict is starting to reveal its true colors. It has now become crystal clear, and no one can try to hide it anymore.”

Parliament member Mehdi Taqi Amerli, who belongs to the Fatah Alliance, also joined the fray, saying Abadi is fighting the PMU under US pressure to dissolve that group.

Muhandis even claimed that Washington told PMU leaders, “We will burn Basra down if the current prime minister’s mandate is not renewed.” Muhandis said the US Embassy played a “sabotaging” role in the Basra events.

There's no confidence anymore between Abadi and the PMU, as the two parties have reached a stage where they can't even meet anymore. The Fatah Alliance has called for Abadi’s resignation.

The theories raised during the fight against IS — that Abadi and the PMU were feuding and that Abadi was coordinating with Washington to weaken the PMU — seem to be materializing.