Following the dismissal of Iraq's Defense Minister Khaled al-Obeidi by the parliament, the Sunni blocs are competing over nominating his successor. 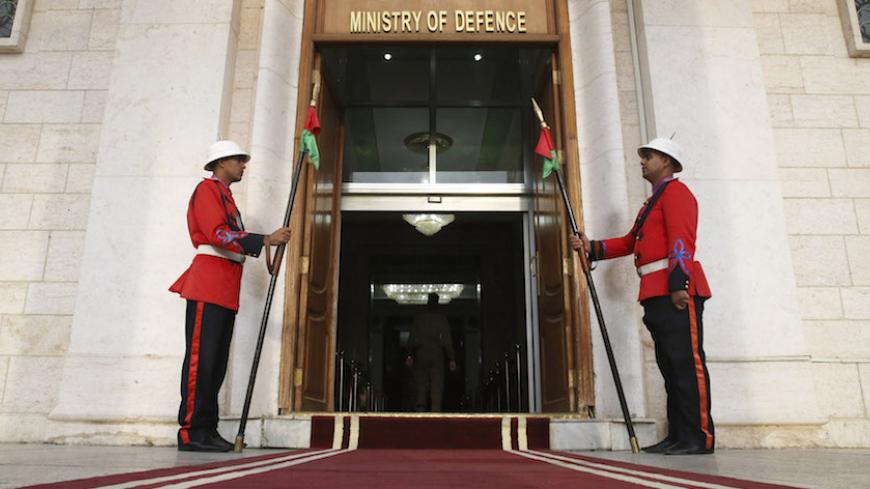 Iraqi guards stand in front of the Ministry of Defense during a visit from then-US Secretary of Defense Chuck Hagel, in Baghdad, Dec. 9, 2014. - REUTERS/Mark Wilson

BAGHDAD — Three lists of candidates have been proposed to Iraqi Prime Minister Haider al-Abadi for the position of minister of defense, held by a Sunni, to replace sacked Minister Khaled al-Obeidi.

The Iraqi parliament had voted Aug. 25 to withdraw confidence from Obeidi on charges of corruption during the interrogation session conducted by Alia Nassif, a member of parliament for the Reform Front, on Aug. 1. Obeidi, however, appealed the parliament decision Sept. 7 before the judiciary, which could delay the appointment process of a new defense minister for several weeks.

The process of naming a defense minister entails several stages. The names of candidates belonging to Sunni blocs need to be forwarded to Abadi, who might select a name or choose someone else from outside the parliamentary blocs. The parliament is then briefed on the candidate’s resume and background before making a confidence vote, which requires the support of the parliamentary majority.

Ahmed al-Jarba, a parliamentarian for the Union of Iraqi Forces — comprising all parliamentary Sunni blocs — told Al-Monitor, “Sunni blocs have nominated several candidates for the post of defense minister instead of Obeidi. However, Abadi has the last say in this matter. He might also nominate someone from outside the political blocs. The Iraqi parliament has the freedom to vote for the candidate it deems appropriate.”

He said, “As per the agreement between the parliamentary blocs and Abadi, the post of minister of defense ought to be held by a Sunni, but the candidate is not necessarily affiliated with the Sunni blocs in parliament, as it is no longer an issue of parliamentary quotas.”

He added, “Previously, the post of the Ministry of Defense was the share of the Mutahidoun bloc led by Nujaifi. Whereas today, all Sunni blocs making up the Union of Iraqi Forces submit a list of names for the post.”

According to parliamentarian Khaled al-Assadi, who is close to Abadi, the prime minister is waiting for the Federal Court decision on Obeidi’s appeal before nominating a new figure for the post.

In a statement to Ayn al-Iraq news agency Sept. 4, Assadi said, “We believe that Abadi is waiting for the Federal Court decision on Obeidi’s appeal before nominating a new candidate. Selecting a new defense minister will take some time and will not be settled in the next few days given the importance of the post.”

However, member of parliament Raad al-Dahlaki of the Diyala Is Our Identity coalition, led by Jabouri, told Al-Monitor that it is unlikely Obeidi will reassume his post. “We have turned the page on former Minister of Defense Khaled al-Obeidi. We are now in the process of choosing a new minister.”

He said, “We fear that the disagreements between the blocs over the name of a new candidate would delay the naming of a new defense minister in these pressing times, where the Iraqi army is waging a war against the Islamic State [IS].”

Dahlaki added, “Sunni blocs have no objection to the nomination of any candidate, even if the suggested names are not part of the Sunni blocs, as long as the candidates are competent and have expertise. We hope that the Shiite coalition would follow in the footsteps of the Union of Iraqi Forces in nominating a new minister for the Ministry of Interior to replace outgoing Minister Mohammed al-Ghabban.”

“It does not make sense for the Sunni blocs to give up their [sectarian] quotas in the government and in selecting a new Ministry of Defense, leaving the matter in the hands of the prime minister, while other blocs cling to their ministerial nominees and government quotas,” Dahlaki said.

It is likely that the post of minister of defense would remain vacant for a long time for many reasons, particularly since Obeidi has been trying to return to office by appealing the parliament decisions and the investigation findings. In addition, selecting a nominee from the Sunni blocs would prompt other opposing blocs to not vote on granting confidence to the nominee.

Shiite and Kurdish blocs, on the other hand, might have different positions on the candidates. The position of the defense minister is of paramount importance, and there are concerns of politicizing it in light of the ongoing war against IS. Thus, all parties ought to select a competent and professional man for the position with utmost care and vigilance.

It is also likely that some parliamentary blocs opposing Abadi, such as the Reform Front, would throw a wrench in the process of nominating a new minister for political reasons, mainly their wish to select a minister away from sectarian quotas.