While Iraq's defense minister and parliament speaker trade accusations of corruption, the major political blocs that support them are threatening to split and reorganize themselves along nonsectarian lines. 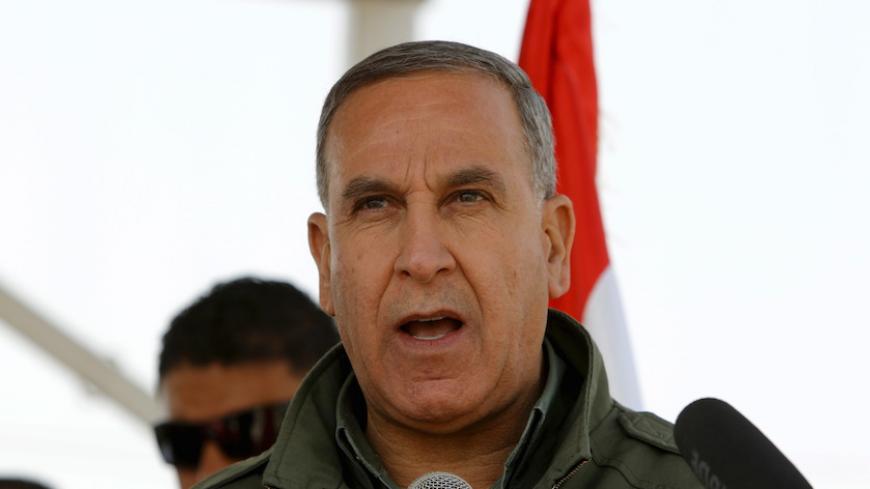 Iraqi Defense Minister Khaled al-Obeidi speaks to the media at an Iraqi army base in Camp Taji in Baghdad, Feb. 21, 2016. - REUTERS/Ahmed Saad

NAJAF, Iraq — Iraq's Defense Minister Khaled al-Obeidi's interrogation by parliament on Aug. 1 has generated controversy on the Iraqi political arena. From the very start of his questioning, Obeidi became the interrogator, hurling accusations at his opponents among many senior political leaders in the parliament.

Parliament Speaker Salim al-Jabouri, a Sunni who had his share of accusations from Obeidi, left the interrogation session in objection.

Obeidi claimed that he had been bribed and pressured to pass corrupt deals and appoint certain individuals as well as those affiliated with a certain political bloc.

Obeidi's accusations were hurled at both Sunni and Shiite members of parliament but mainly focused on certain political blocs known for their hostility toward him that led to the previous interrogation sessions. Most of Obeidi's accusations were directed at parliament members for the Sunni Islamic Party, including Jabouri, as well as other Shiite parliamentarians in the State of Law Coalition, such as Alia Nassif and Hanan al-Fatlawi.

The interrogation session was viewed as a sign of the serious differences among Sunni politicians, in the words of Badr al-Fahl, a leader in the Sunni National Forces Alliance. Fahl criticized the parliament for carrying out the interrogation at a time it should be preoccupied with the fight against the Islamic State.

Following the session, the Sunni-majority Iraqi National Forces Alliance suggested nominating candidates to replace Jabouri, assuming that he would resign or be sacked by the parliament. Parliament member Ahmed al-Jabouri for the Sunni Iraq Coalition Bloc originated the campaign to replace Salim al-Jabouri.

Back in April, the bloc announced its withdrawal from the Iraqi National Forces Alliance to form the Reform Front together with other blocs and Shiite and Sunni parties, and demanded the dismissal of the president, the prime minister and the parliament speaker.

Ahmed al-Jabouri had nominated himself for speaker of parliament after the Reform Front dismissed Salim al-Jabouri on April 14. However, the Federal Supreme Court revoked his dismissal June 28.

Following the interrogation, Obeidi testified before the parliamentary Integrity committee and the public prosecutor on Aug. 4.

In response, Salim al-Jabouri filed a lawsuit against him on Aug. 7 for defamation and libel in addition to “insulting the sovereign state institutions.”

Another indication of the deepening split among the Sunni bloc, Jabouri said, came when Obeidi “put up a show to thwart the interrogation session” with his accusations. He claimed Obeidi has become a “tool to ignite conflict among Sunnis.”

Salim al-Jabouri has gone so far as to accuse Osama al-Nujaifi, the head of the Mutahiddun Coalition, of being behind Obeidi's recriminations in a bid to have him sacked. Nujaifi, however, denied any knowledge of such plots or agendas, saying, “Obeidi’s acts are against corruption.” He also stressed that he “will not allow sectarianism to be a cover for corruption.” Of note, Obeidi is affiliated with Nujaifi in the Sunni political subdivisions.

From a Shiite point of view, Obeidi’s corruption accusations against some parliament members and political leaders were very welcome. Obeidi made a visit to the Shiite-majority Kadhimiya, home to the shrines of the seventh and ninth Shiite imams, on the day of the interrogation and was warmly welcomed with supportive slogans.

Obeidi has also received considerable support at the Shiite political level, especially from Prime Minister Haider al-Abadi, who issued an order “temporarily banning those whose names were mentioned in the Aug.1 interrogation session from traveling, to better serve the investigation of the allegations and given the seriousness of the charges,” according to a statement by Abadi’s media office.

Shiite leaders Ammar al-Hakim and Muqtada al-Sadr both expressed their full support for Obeidi, condemning the blackmail they said he was subjected to by the accused parliamentarians during the session. They called for drastic reforms to combat corruption in the government.

Obeidi did not accuse Hakim or Sadr’s blocs during the questioning session.

Nujaifi’s camp welcomed the Shiite leaders' support for Obeidi as the news went viral on the social networks and news sites of Nujaifi’s group.

For its part, the State of Law Coalition led by former Prime Minister Nouri al-Maliki criticized Obeidi’s actions during the questioning, calling his accusations “an attempt to derail interrogations” and saying that his allegations do not exonerate him. The coalition stressed that he should also be held accountable for remaining silent on the corruption in which he was implicated. Some of the cases that Obeidi brought up in the interrogation session occurred more than a year ago.

Unlike Abadi, Hakim and Sadr, Maliki remained silent on Obeidi's interrogation, suggesting his dissatisfaction with what had happened. Alia Nassif and Hanan al-Fatlawi, both Shiite members of parliament singled out by Obeidi in the interrogation session, are members of Maliki’s State of Law Coalition.

Several news sites have reported about Maliki's possible involvement with Salim al-Jabouri in his efforts to withdraw confidence from Obeidi, but then things took an unexpected turn.

It appears that splits are deepening in big political blocs formed around sectarian identity as their members try to forge cross-sectarian alliances with other political blocs based on common interests. There has also been an alliance formed between the Patriotic Union of Kurdistan and the Movement for Change (Gorran), which seems to be a signal to the Shiite coalition, expressing interest in cooperation against the Kurdistan Democratic Party.