How Iraq's political blocs are trying to win over youth

The early electoral campaigns in Iraq have been focusing on the youth, while the political parties seek to amend the electoral law to allow Iraqis as young as 25 years of age to run as candidates. 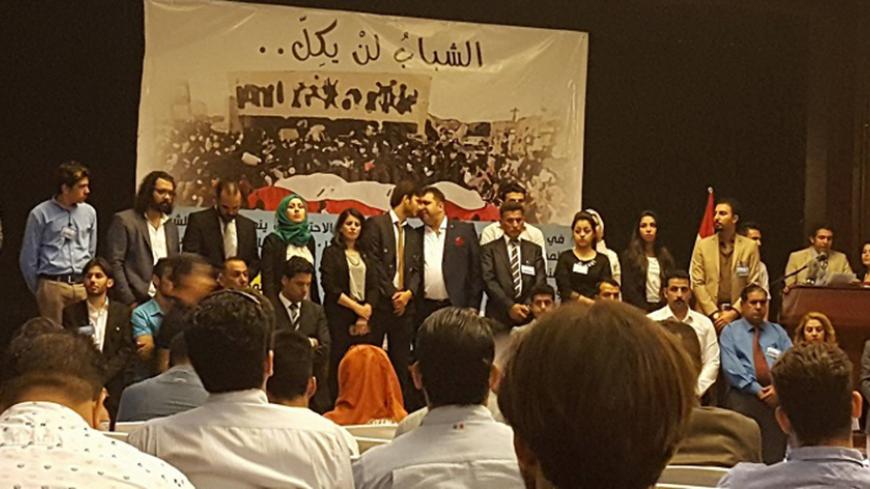 Iraqi youth groups holding their first conference, titled “The youth will not tire,” at the Palestine Hotel, Baghdad, July 13, 2016. - Twitter/annabaanews

On Aug. 17, Islamic Supreme Council of Iraq leader Ammar al-Hakim had also requested to lower the age of candidacy, which would bring into the parliament younger representatives of the political blocs.

There is no doubt that this step shows that the Iraqi youth have an important say in regard to the ongoing events, since they are the most engaged in political and social issues.

The youth represent the backbone of the civil movement and the protests calling for reform that started in June 2015. On July 13, 2016, youth groups held their first conference titled “The youth will not tire” at the Palestine Hotel in Baghdad.

Yet, calling for lowering the candidacy age to 25 raises questions whether this sincerely aims to serve the youth reeling under an unemployment crisis, or whether it is a political maneuver to take advantage of this group in society.

Writer and journalist Karim Jakhiour told Al-Monitor in Baghdad, “Hakim wants to amend the electoral law by lowering the candidacy age since he feels that the Iraqi street has lost faith in the symbols of political blocs. These blocs are seeking to bring in new young faces in an attempt to deceive the Iraqis.”

He added, “Past experiences proved that political blocs did not serve the youth, since graduates and academics are still unemployed."

Expectations of early elections were among the most important factors that pushed political blocs to launch early electoral campaigns. On April 14, Iraqi parliament Speaker Salim al-Jabouri had called on dissolving the parliament and holding early elections.

Iraqi political analyst Khaled Abdulelah reported Aug. 6 about the deep divide among political blocs, which could lead to early elections.

Within the scope of these early electoral campaigns, political figures and blocks focused on social media; dozens of Facebook pages have been created to support parliamentarians and politicians and list their personal achievements, including, for instance, the pages set up by the supporters of members of parliament Hanan al-Fatlawi, Mish’an al-Juburi and Mohammed al-Tai.

Qassim Hussein Salih, the founder and head of the Iraqi Psychological Association, told Al-Monitor, “Most of these pages are created by those receiving financial or moral gains, since the minister or parliamentarian they support would be from their tribe or the political party to which they are affiliated. These persons find in these pages a means to become famous or win favors.”

Journalist Alaa Koli told Al-Monitor that he knows numerous journalists who administer Facebook pages for a member of parliament or politician in exchange for a monthly salary. “Political blocs are competing to win over the youth to their side,” he said.

One of the tools used in these early electoral campaigns was the slogan of combating corruption. Yet, it seems that this slogan is being exploited for electoral purposes only. Iraqi Prime Minister Haider al-Abadi said July 23, “No one has the right to raise the reform slogan while acting against reform,” calling on political blocs to keep away from political bickering for the sake of the elections.

The fact that these campaigns exploited people's harsh circumstances such as unemployment, corruption and poverty raised the ire of the Iraqi street.

On Aug. 22, citizens expressed to media outlets their dissatisfaction with the “very early” electoral campaign launched by parliamentarian Hanan al-Fatlawi in preparation for the 2017 provincial elections and 2018 parliamentary elections.

In the same vein, on Aug. 15, the newly appointed minister of higher education and scientific research, Abdul Razzaq al-Issa, told media outlets he would not be part of an electoral agenda that monopolizes institutions and exploits them for narrow interests.

Moreover, Abdel Azim Ajman, a member of parliament for the coalition of Iraqi forces, told media outlets Aug. 21 that the quest to issue the General Amnesty Law also falls within the scope of the electoral campaigns.

In early August, the Christian al-Rafidain bloc in the Iraqi parliament issued a media statement describing the issuance by the government of a decision and the subsequent cancellation of this decision as an early electoral campaign tool.

State of Law Coalition parliamentarian Mohammed al-Sayhoud justified early electoral campaigns targeting youth groups. He told Al-Monitor, “Political blocs are entitled to remind the people of their political and parliamentary achievements. Lowering the age of candidacy for the elections will allow the youth to contribute to the legislative decision-making process and increase the number of young members of parliament.”

Yet, member of parliament Shirin Reza of the Kurdish opposition Gorran (Change) bloc told Al-Monitor, “Focusing on attracting young voters and lowering the age of candidacy of the parliamentary elections reveals that the political blocs have disappointed the youth, which turned into an unemployed class.”

She said, “Amending the electoral law by lowering the candidacy age would bring in young faces to the parliament, and this worries older members of parliament."

The Iraqi political parties focus on young people and promise to exploit their capacities, reduce unemployment among their ranks, and support small and medium enterprises that provide job opportunities. Yet, these promises should not be mere electoral slogans aimed to mobilize followers and supporters. Rather, they must fall within the scope of a consistent strategy to translate electoral programs into projects on the ground. This is how political blocs will boost the people’s confidence, especially the youth.