Why does Iraq want to bring back dismissed security forces?

The Iraqi parliament wants to implement a decision to repatriate Iraqi soldiers who abandoned their posts during the rise of the Islamic State in 2014, but some are worried about the motives behind the decision. 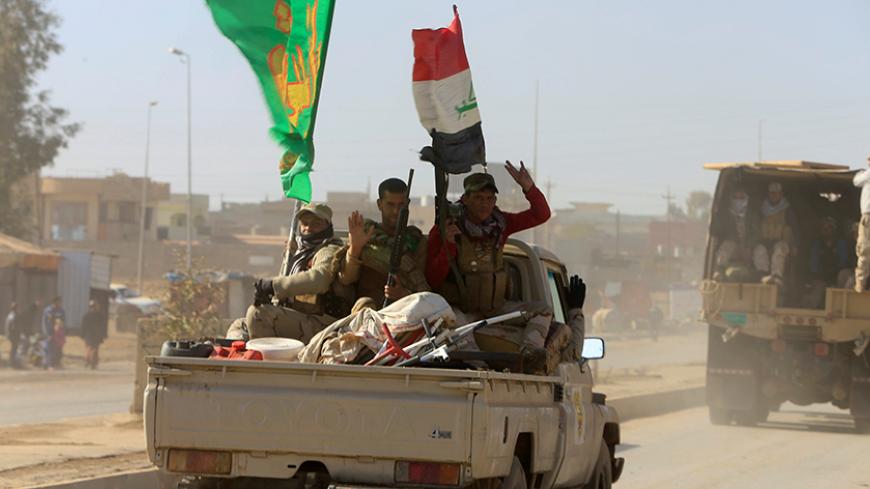 BAGHDAD — Dismissed officers welcomed the decision to repatriate security officers who had fled Iraq, after the Iraqi parliament voted on their return Dec. 4.

On Dec. 17, the parliamentary Security and Defense Committee announced that with the beginning of the new legislative term in 2017 it would follow up on the implementation of the law to repatriate those dismissed from the army, police and security institution, or others who escaped or whose contracts had been terminated.

The decision was taken more than a month after the launch of the Mosul liberation operations to recapture the city from the Islamic State (IS), which had been in control since June 2014. At that time, the army collapsed and left its weapons on the battlefield, while the military leaders accused of handing over the city to IS fled.

The decision received conflicting responses from political blocs. The State of Law Coalition believes the decision was made because of political motives and because certain political parties would benefit from it.

State of Law Coalition member of parliament Razaq Mheibes told Al-Monitor, “The decision resulted from political and media pressure.” He said that the Sadrist movement has been trying to direct the public opinion to approve the amnesty law (the law of repatriating the security forces who escaped before), and that it presented proposals to the parliamentary legal committee in July. This helped the law materialize, and proposals that the parliament approved were put forward.

He added that the State of Law Coalition approved the amnesty law to acquit the fugitives and those who were dismissed in response to the political components in favor of this. The coalition’s vote was essential to gain the trust of political partners and mend relations in this delicate phase.

Member of parliament Intisar al-Juburi spoke on behalf of the mostly Sunni Union of National Forces and called for granting amnesty to those affiliated with the security apparatus and those who fled the service after 2014, because of the vast military and security experience they possess.

Juburi did not deny the presence of political motives behind the decision, and said that the parliament’s decisions have political dimensions because it is formed of blocs with different interests and inclinations. She asserted that the approval of the amnesty law to acquit the soldiers and policemen who fled mainly aims at “regaining public popularity with the nearing elections.”

But humanitarian motives are also at play.

The president of the Iraqi Group for Strategic Studies, political analyst Watheq al-Hashimi, told Al-Monitor that the decision to bring back those who were dismissed from the security apparatus and those who fled is usually taken during a long-lasting war because the state needs expertise and soldiers to compensate for a lack of security officers.

Hashimi emphasized the importance of the rules that bind military men to implement the military sanctions’ decision in Iraq in order to prevent them from escaping.

Hashimi and Juburi had a similar opinion, with Hashimi noting that electoral motives led to a majority approval of the decision because elections are imminent and Iraqi politicians need to offer people something tangible to regain their trust.

National Forces Alliance member of parliament Raad al-Dahlaki told Al-Monitor that the decision gives the people who escaped a second chance, so that they wouldn’t have to bear the burdens of a state that could not protect its citizens. They should not be held accountable for the government’s bad management of security and political affairs.

Dahlaki said, “They want the province’s citizens to hold on to their lands because they know well what is going on.” He noted that the amnesty granted to local policemen and some officers is a serious chance for them to reinforce security.

Dahlaki said that the decision definitely has political and electoral goals, as is the case with most parliamentary decisions.

Saad al-Matlabi, a member of the Security and Defense Committee in Baghdad’s Provincial Council, told Al-Monitor that the decision to grant amnesty to security officers and to halt their legal pursuit was part of the political settlement decisions that were taken long before the Mosul operations. But they were only approved a few days ago.

Matlabi said that the decision applies to those who fled the security apparatus after 2014 to bring them back to service. The benefiting party is the Sunni side, as the policemen and members of the federal police as well as soldiers who fled and handed over their arms after IS invaded the city hail from Mosul. The decision also involves halting investigations and bringing back former military leaders to their positions without accountability, which means that the reasons behind the fall of Mosul and those implicated in it will not be addressed.

While those concerned by the amnesty law rejoiced, some Iraqis were angry at the decision that equates fugitives to the men who stood their ground on the battlefield instead of handing their weapons to the army and fleeing. Alaa al-Saidi, a citizen from Baghdad who works at the Ministry of Defense and who did not flee from the barracks, told Al-Monitor, “Exempting military leaders of legal pursuits is perplexing and suspicious. It is an attempt to hide the crime of Mosul’s fall.”

Despite the opinions and statements about the decision to bring back those who fled and those who were dismissed, the political process in Iraq remains based on consensus and fulfillment of the interest of political blocs to receive gains. The amnesty decision was reached because it satisfies the needs of all political blocs in winning voters with the imminent Provincial Council elections, which constitute a prelude to the parliamentary elections in Iraq.