After numerous delays, the Iraqi parliament approved an amnesty law that addresses Sunni and Shiite grievances stemming from post-2003 prosecutions. 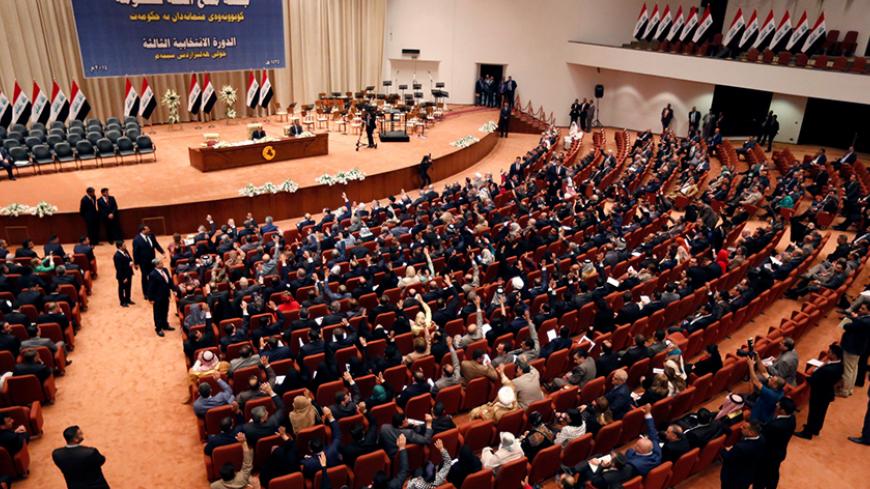 Members of the Iraqi parliament gather to vote on Iraq's new government at the parliament headquarters in Baghdad, Sept. 8, 2014. - REUTERS/Thaier Al-Sudani/File Photo

Baghdad — After a long, hard process of give and take, the Iraqi parliament approved a General Amnesty Law Aug. 25. The vote was 250-78, with a majority of the Sunni blocs supporting the law, while a group of Shiite legislators from the National Alliance opposed it. The law took effect immediately.

Debate on the law had been held Aug. 15 before being postponed to Aug. 23, due to the Badr Organization, Islamic Virtue Party and State of Law Coalition, all members of the National Alliance, withdrawing in protest against the reading of a previous draft of the legislation under which more people would qualify for release than they wanted. The Aug. 23 session was also postponed, due to differences among the political blocs.

People convicted between 2003 and the date the law was approved are eligible to apply for amnesty, except those convicted of 13 types of crimes, among them acts of terror resulting in death or permanent disability, human trafficking, rape, money laundering and embezzlement and theft of state funds. Investigating judges and competent courts are charged with implementing the provisions of the statute. If a convict is ruled ineligible for amnesty, he or she can appeal to the Court of Cassation.

Writer and political analyst Mohammed al-Kaabi told Al-Monitor that the passage of an amnesty law had been included as part of the political document allowing Prime Minister Haider al-Abadi to form a government in 2014. He said its delay was largely related to the crisis in confidence between the political components and the influence of foreign parties on Iraq's political and legislative institutions.

Several amendments were made to the draft of the new law to satisfy opponents who were worried about the release of dangerous individuals. Rule of Law representative Sadiq al-Laban told Al-Monitor, “We tried to exclude from the general amnesty law cases that pose a threat to society, as the release of such prisoners could lead them to commit other acts of terrorism. In this regard, many amendments were made to prevent terrorists from exploiting the general amnesty law and to evaluate prisoners with the aim of sorting out the terrorists.”

Laban said that while the predominantly Shiite National Alliance tried its best to prevent the release of convicted terrorists, legislators from the all-Sunni Iraqi Forces Coalition had sought to expand the law to include people convicted under Article 4 of the Anti-Terrorism Law, as they believe innocent people, mainly Sunnis, were wrongly prosecuted under the act for political reasons during the two terms of Prime Minister Nouri al-Maliki. In the version of the law that ultimately passed, individuals serving Article 4 sentences can apply for amnesty as long as their alleged crime did not result in someone's death or disability.

Laban explained that disagreements over the scope of the amnesty were overcome by adopting the process of judges reviewing cases and allowing appeals for those denied amnesty. He charged that the Sunni forces had wanted an amnesty that would have covered former Vice President Tariq al-Hashemi, who is in exile and was convicted and sentenced to death in absentia for terrorism, and other alleged terrorists, but they did not succeed. He claimed that no international or regional pressure had been applied to pass or amend the legislation.

Rasool al-Tai from al-Ahrar bloc, affiliated with Shiite cleric Muqtada al-Sadr, supported the law and told Al-Monitor that leaders in the Shiite State of Law Coalition, who opposed the law during the parliamentary debate, had previously released terrorists and corrupt individuals outside the framework of legal channels. He explained further that they had released several terrorists, people involved in corruption and fake degree holders from prison through politically expedient pardons issued by both President Jalal Talabani and Prime Minister Maliki, one example being Mishaan al-Juburi — convicted of cooperating with terrorist groups, including al-Qaeda, and encouraging acts of terror — who received a pardon from Maliki and now sits in the current parliament.

Hakem al-Zamili from al-Ahrar bloc worked to ensure the law did not overlook 30 prisoners from the Sadrist movement who had been tried at the request of the United States for attacks on foreign forces, that is, US military personnel. The inclusion of Sadrist prisoners followed an Aug. 16 visit by Zamili to the Rusafa Court of Appeals, which will have a hand in examining amnesty requests, to see the head of the court and discuss the sections of the draft law related to the Sadrists.

Although the law was passed with majorities from all the parliamentary blocs supporting it, a group of representatives from the National Alliance announced Aug. 25 that they planned to appeal it before the Supreme Federal Court, calling the law's approval a “gift for terrorists and members of IS [Islamic State], and a betrayal of the blood of the martyrs and victims.” State of Law Coalition member Adnan al-Asadi claimed that the law allows the release of IS muftis who issued fatwas for the group.

Raad al-Dahlaki, a representative for the Iraqi Forces Coalition denied there being fundamental differences over the General Amnesty Law, telling Al-Monitor, “All blocs agreed on the law, but there are still insignificant differences that appear in the media reflecting political posturing.”

Asked about pressures that might have affected voting on the law, such as threats by militias to break into prisons and kill convicted terrorists, Kurdistan Alliance representative Arafat Karam Mustafa Brayem told Al-Monitor, “Threats by militia leaders reveal the weakness of the government, but [they] did not serve as a means of pressure on the procedures of voting on the general amnesty law.”

Kaabi also underplayed the threat posed by militias, viewing their statement as mere muscle flexing for show. In the end, the law was passed because Iraq's often contentious political parties were able to strike a deal.