After boycotting the alliance for months, the Sadrist movement says it has returned, conditionally, to prepare a united front for the upcoming elections. 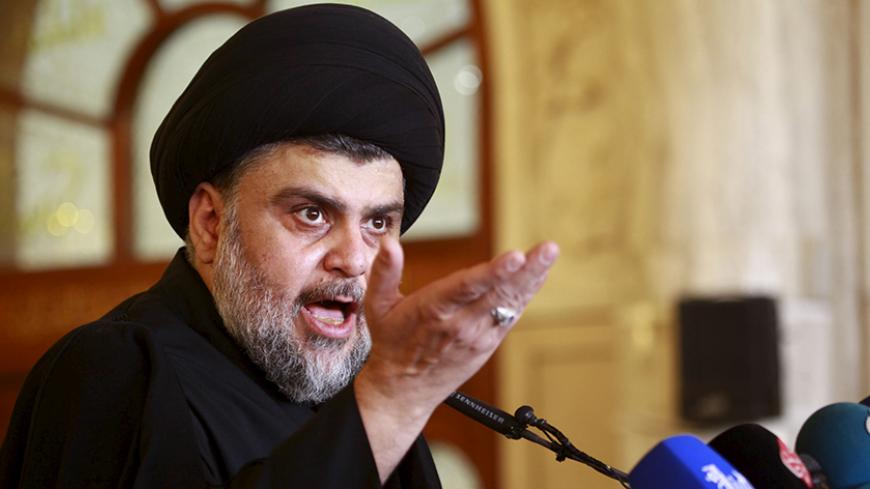 BAGHDAD — The Sadrist movement has rejoined the Iraqi National Alliance, but with a list of 14 conditions it expects to be met eventually. The movement had been boycotting the alliance since April, after Sadrist leader Muqtada al-Sadr hurled accusations that the alliance was shielding corrupt figures.

The alliance, which is mainly composed of Shiite Islamist parties, includes the State of Law, the Islamic Supreme Council, the National Reform movement and a few small groups.

Most of Sadr's conditions have not been met, as allegedly corrupt figures have yet to be held accountable and brought to justice. He also is seeking to abolish the practice of the alliance nominating government ministers, and wants to refer the alliance’s current and former ministers to the judiciary and the Integrity Committee. He also wants the electoral commission to be abolished or amended.

It appears that the Sadrist movement is overlooking the unachieved conditions for now, since the 2017 municipal elections are approaching and the liberation of Mosul is expected by the end of the year. These situations require new political alliances to be forged, and Shiites realize they need to stay united to continue leading the country.

A source in the alliance who asked not to be identified told Al-Monitor, “The Sadrist movement has returned to the Shiite alliance in a bid to reseize the Ministry of Industry, which it relinquished July 19. It is seeking to get back its positions in power.”

However, Mithaq al-Mouzani, a parliament member for the Sadr-backed al-Ahrar bloc, denied such statements in his interview with Al-Monitor: “The goal behind the Sadrist movement’s conditions is to re-evaluate the work of the national alliance and to rectify the mistakes that occurred in previous years.”

He added, “The movement has reservations about [the alliance] choosing Ammar al-Hakim as head of the alliance without our approval. We attended the meetings after we had reassurances that all the conditions put forth by the movement would be implemented."

The alliance did announce that the Sadrist movement's return is “permanent”; however, the latter linked its affiliation to reassurances that its conditions will be met in full, “which means that its exit from the alliance in the future is likely,” said Sadiq al-Mahna, a parliamentarian for the Reform movement.

“Some of the conditions put forward by Sadrists for the [Shiite] National Alliance remain unenforceable unless amended. We fear that this might be the cause of disagreements between the Sadrist movement, the State of Law and the Citizen Alliance, in case the conditions are not met and al-Ahrar bloc withdraws again,” Mahna told Al-Monitor.

However, this potential disintegration, journalist Hadi al-Issami told Al-Monitor, “remains a low probability in the coming period." The alliance “is likely to remain united following the provincial elections next year, which serve as the gateway for redrawing coalitions with the Shiite alliance,” he noted.

“The parties to the alliance need to unify their visions about the shape of the next local government, especially since Shiites were able to win the Diyala governorate, after it was being affiliated with the Sunni parties,” he said.

“The Sadrist movement’s return to the alliance stems from its need to compensate for its absence in the past period, during its rapprochement with the Islamic Supreme Council. This was when the movement made gains at the state level" and received widespread publicity. "The movement was less keen on the unity of the Shiite ranks and appeared to be seeking to split the Shiite unity with the demonstrations it had launched," he added.

Issami further said, “The conditions set by the Sadrist movement are an attempt to justify its return to the alliance and to dodge public criticism.”

Qassem Mozan, a writer for Sabah newspaper, believes there is more at play than the internal factors that prompted the alliance to strengthen its ranks.

He told Al-Monitor, “Iran, which supports the State of Law Coalition and the Islamic Supreme Council, has been pressuring [those groups] to create a satisfactory atmosphere for the Sadrist movement in order to guarantee the success of the Shiite forces in the upcoming forces. This is especially true given the obvious public dissatisfaction with these forces’ performance and their involvement in corruption in many political issues.”

All alliances, whether Shiite or Sunni, will come together and join ranks against secular parties for the legislative and local elections, Mozan said.

“All the forces are well-aware that the popularity is declining among Shiite and Sunni voters alike and they must find a way to address the looming electoral impasse,” he added.

With the Sadrist movement’s return to a coalition, Iran has entered a new phase of balanced support among the parties of the Shiite alliance. It supported Nouri al-Maliki when he was prime minister from 2006-2014, and it stood by the Islamic Supreme Council so that its head, Hakim, could lead the coalition. But there is a possibility that it also will support the Sadrist movement if it expresses policies that promote the unity of the coalition, which Tehran seeks to strengthen.

The post-Islamic State (IS) era is seen as allowing a new style of political action, based on limiting the conflict between political parties as much as possible, especially among Shiite forces; many consider this the best way for political survival under the significant decline of their popularity. Also, these forces are well aware that a triumph over IS will be a victory for Iraqi Prime Minister Haider al-Abadi alone. This is why, observers believe, they seek to support him, so they will also be viewed as victorious and benefit from this victory in the elections.