Why Iraq's Shiites are wary of Sadr's 'Initial Solutions'

Shiite cleric Muqtada al-Sadr's proposal for national reconciliation in the post-Islamic State era has attracted support from Sunnis, but Shiites not so much. 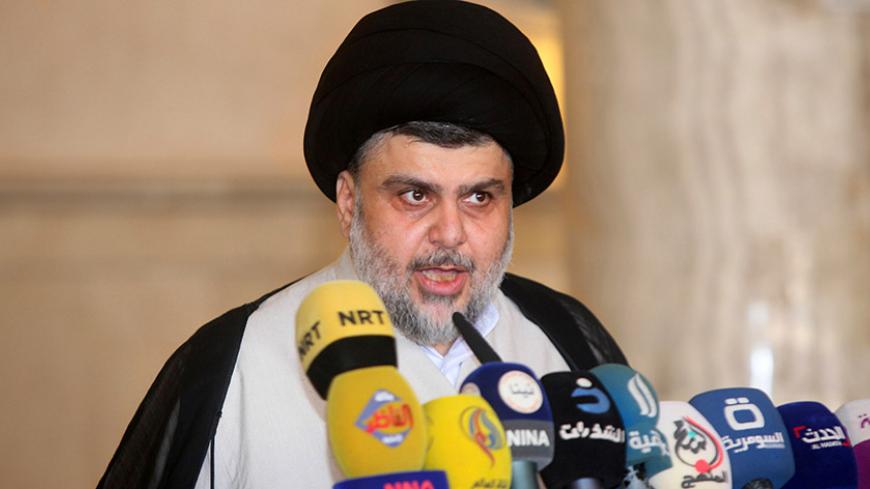 BAGHDAD, Iraq — With the fight progressing to retake Mosul from the Islamic State (IS), the Shiite cleric Muqtada al-Sadr presented Initial Solutions, a national reconciliation proposal for shaping post-IS Iraq. The initiative, announced Feb. 20, consists of 29 points. Sadr's various proposals are seemingly incompatible with the orientation of the Shiite parties of the National Alliance, and in direct conflict with the vision of Ammar al-Hakim, head of the alliance, but Sunni blocs, to which the proposal extends bridges of trust, have voiced support.

Among the initiative's proposals are establishing a UN-sponsored fund to support reconstruction and forming a UN-supported entity focusing on human rights and minorities to deal with and prevent sectarian and ethnic conflicts and violations. It also calls for dialogues among politicians, tribal leaders and social elites to ease factional and sectarian tensions.

Sadr, spiritual leader of the al-Ahrar bloc and the Sadrist Movement, proposes that the predominantly Shiite Popular Mobilization Units (PMU), although made an official fighting force in November, be dissolved. He contends that the Iraqi army and security forces alone should be responsible for protection in areas liberated from IS and any disputed territories.

Instead of the PMU standing separately, Sadr called for “striving to integrate disciplined PMU [fighters] into the security forces, in such a way to preserve the independence and sovereignty of the national security forces.” He suggests that the PMU militias, including his Saraya al-Salam (Peace Brigades), turn their headquarters into cultural, civil, social or humanitarian institutions and centers.

Commenting on why Sadr wants to shut down the armed factions' offices, Ibrahim al-Jabiri, director of Sadr’s office in Baghdad, told Al-Monitor, “The initiative aims to strengthen the official security forces … through their integration into the military and security establishment.”

The most significant item of the initiative is its call for the Iraqi government to expel all “occupying and even friendly forces from Iraqi territory,” to preserve the stature of the state. This means the expulsion of US and Iranian troops and advisers. The Iraqi government, however, has a security agreement with the United States, and US forces will be needed in the long-term to train and assist Iraqi troops. Baghdad is also not ready to shed its Iranian ally, these days represented in Iraq by Qasem Soleimani, the Quds Force commander, who also oversees PMU operations.

Jabiri said, “After the country’s liberation from IS control, the Iraqi government will no longer need any outside help. Therefore, the presence of any foreign forces after the liberation of Mosul will no longer be justified.”

Jabari added, “When he said the 'occupying' forces, Sadr meant the American troops and those who cooperated with them in occupying Iraq in 2003. As for the 'friendly' forces, he meant all the forces that came to Iraq to provide assistance after IS took over the country’s northern and western areas in 2014.” Concerning so-called friendly forces, Jabiri said, Sadr’s proposal includes the expulsion of Turkish troops deployed to Bashiqa, near Mosul, ostensibly as trainers, as well as non-Iraqi Kurdish peshmerga who entered the country for the battle against IS.

Jabiri said Sadr wants to form a committee to represent him and pursue implementation of his initiative with the government and political parties in the hope of persuading committee members to introduce and approve his proposals. He said that some parties will, of course, oppose the initiative, noting, “It is in direct conflict with their interests and their keenness for preserving the status quo.”

The State of Law Coalition, led by Vice President Nouri al-Maliki, was the first to criticize the initiative. Coalition representative Alia Nassif said in a Feb. 21 statement that internationalizing the initiative, for example, by engaging the United Nations and contracting with foreign companies in reconstruction efforts, would “mean advancing the interests of other countries.” Nassif said, “It is wrong to commit to all its terms.”

Al-Mowaten, the bloc headed by Hakim, said, “All Shiite alliances signed the national reconciliation project [proposed by Hakim and the National Alliance], which represents a road map for post-IS Iraq. Sadr’s initiative falls within this framework.” In short, the bloc's position is that there is no need for Sadr's initiative given the National Alliance's Historical Settlement, the proposal announced Oct. 31. Sadr's plan, however, addresses more long-standing Sunni demands than the alliance's.

Meanwhile, Sunni parties have welcomed Sadr’s initiative, namely, the Mutahidoun Bloc, headed by Vice President Osama al-Nujaifi, and the Pan Arab Project, led by Khamis Khanjar, which did not support the Historical Settlement. In a statement Feb. 20, Khanjar said his party supports most of Sadr’s initiative, noting that Iraq has a historic opportunity to carry out comprehensive reforms. The Sunnis also like that its call for dialogue among sect and tribal leaders, including that Shiite leaders visit Sunni leaders in their communities. It also appears that Sadr is considering approaching Sunnis as potential allies in future elections.

Although some of Sadr's proposals seem practical and attractive, such as dialogues toward reconciliation, ending sectarian tensions and international funding and support, the initiative is unlikely to go anywhere. Other items, such as the expulsion of foreign forces and the abolition of the PMU, are far-fetched. Given the competing forces, the initiative is likely to remain shackled by political conflict.