Sunni blocs, which walked out of the Iraqi parliament when the Popular Mobilization Units law was passed, are now refusing to participate in the national reconciliation project. 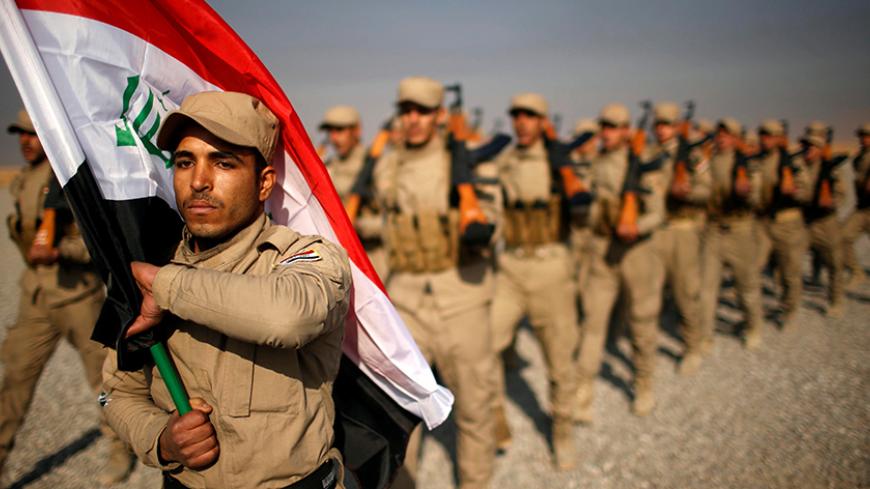 BAGHDAD — Iraq's parliament is divided over a proposal designed to unite the country.

Iraq's passage of a law establishing the Popular Mobilization Units (PMU) as an official security force threw a wrench into efforts to adopt a national settlement proposal — basically a grand plan to abolish sectarian and ethnic quotas in parliament and "put an end to the monopoly of power by the Shiite parties, as opposed to the marginalization of the Sunni sect." The proposal says it will involve "all segments of Iraqi society and ethnic and religious communities, including women, youth and civil society organizations."

The parliament's Sunni blocs don't think empowering the PMU, an umbrella organization of dozens of predominately Shiite groups, is a good example for ending that monopoly. Since the PMU was formed in 2014, it has been seen by many as a band of outlaw militias accused of human rights violations against Sunni civilians in the areas where it has been fighting the Islamic State (IS).

When the PMU law passed Nov. 26, the Sunni blocs walked out of the parliamentary session as a show of opposition. Now the Sunni blocs have walked away from the national settlement proposal. Saleh al-Mutlaq, the head of the Iraqi Front for National Dialogue, called the PMU law the final destruction of the settlement.​

Sheikh Khamis al-Khanjar, an influential Sunni leader, also rejected the national settlement proposal after meeting Dec. 6 with Jan Kubis, the head of the United Nations Assistance Mission for Iraq. Kubis had tried to convince him to participate in the settlement.

The Sunni blocs now have three options. According to Ahmad al-Sulmani, a member of the Sunni Union of Nationalist Forces, the first option is to challenge the PMU law in federal court; the second option is to negotiate amendments. Muqtada al-Sadr, the head of the Shiite national Sadrist movement, has presented proposed amendments to the PMU law to Iraqi President Fuad Masum and parliament Speaker Salim al-Jabouri.

If both of those options fail, the Sunni blocs would have to resort to completely boycotting the national settlement project, which has been embraced by the largely Shiite Iraqi National Alliance, headed by Ammar al-Hakim.

Sulmani told Al-Monitor, “The Sunni blocs in the Iraqi parliament were hoping to find a solution to the PMU and integrate it within the army and police force. However, after the National Alliance insisted on turning the PMU into an institution, we agreed so long as it would be accepted by all parties and passed by consensus.”

The most important amendments that the Union of Nationalist Forces wants to make to the PMU law include preventing individuals accused of violating the rights of civilians from being integrated within the PMU institution, leaving the task of controlling areas liberated from IS to the army, not the PMU, and raising the percentage of Sunni fighters in PMU ranks to 40%. PMU spokesman Ahmed al-Asadi said in November that there were some 9,000 Sunni fighters — only 8% of the PMU total force of about 110,000.

“Sunni parties refused to receive the draft … from the National Alliance and agreed among themselves not to be part of this settlement as long as [the Shiite parties] do not show good intentions, particularly in amending the PMU law,” Sulmani added.

The National Alliance said it aims to involve all parties in the Iraqi national settlement project, to resolve outstanding issues and disagreements and eliminate all political issues for the post-IS phase.

However, not only did passing the PMU law by majority — without the consent of all political parties in parliament — make Sunni parties doubt the seriousness of the “settlement,” it also raised the ire of Sadrists, who object to the law in its current form.

On Nov. 28, Sadr addressed the three presidencies (the republic, government and parliament), calling for the introduction of reforms in the PMU law.

He noted in a statement that he has urged the three presidencies to “integrate the PMU within the official security forces.” He added, “To avoid all sectarian, political and security issues, I believe it would be best to take into consideration all proposals, especially after the parliament agreed on this integration.”

In addition, Sadr stressed in his recommendation “the need to keep all those who wish to stir sectarian strife at an arm’s length, along with those who sold out two-thirds of Iraq.” He was referring to former Prime Minister Nouri al-Maliki, under whose management two-thirds of the country was lost to IS.

This Sadrist-Sunni rapprochement will keep the debate over the PMU institution going for quite a while if changes aren't drafted by the president or the federal court. That would mean that Saraya al-Salam (Peace Brigades), the Sadrist movement’s military wing under the PMU umbrella, would not remain with the PMU. A Sunni division would emerge between parties that do wish to join the PMU and political parties objecting to the PMU’s current form. This tense situation also threatens the settlement project.

For his part, Salim Shawki, a member of the Al-Mouwaten bloc, headed by Hakim, told Al-Monitor, “The real problem facing the national settlement project does not lie in the PMU law at all; it is rather represented by the large number of parties wishing to be part of this project.”

He added, “Many parties claim to be representing Sunnis, which is turning into the biggest obstacle for the settlement. … Most parties agreed on the PMU law, and those that objected only want to amend a few of its provisions.”

Despite the long discussions conducted before the PMU law was passed, critics said its provisions were too general and lacked details. For instance, the law does not specify the number of fighters who would officially join the PMU, although Asadi had noted there will be 142,000 fighters, including 30,000-40,000 Sunnis.

It would be a first for an Iraqi security institution to be divided according to sects. This is why the law avoided mentioning ratios. However, all concerned parties noted that Sunnis and Shiites will control the liberated areas according to certain percentages, under the command of Prime Minister Haider al-Abadi.

In this context, Abadi noted in a statement approving the PMU law: “Under the law, the PMU has come under the direct leadership of the general commander of the armed forces. This law will represent all Iraqi people and defend Iraqis wherever they are. This will not please those seeking chaos who tried to impede the law for a long time.”

For the first time ever, Shiite factions will officially be under government administration, and perhaps the state will be able to adjust their activities and follow up on their actions, allowing it to pursue and hold accountable the factions and armed groups that are not affiliated with the PMU.

However, one cannot tell how the prime minister will deal with Saraya al-Salam if they decide not to join the PMU under the law, as well as other Sunni factions such as the National Mobilization, headed by Atheel al-Nujaifi, the former governor of Ninevah province. It remains uncertain how the law would be able to integrate all PMU factions and isolate them from their previous leaderships.

Most importantly, many observers wonder what position the government would take if the PMU decides — either officially or unofficially — to participate in the battles in Syria, especially since Maliki had announced that the PMU would be heading to Syria after liberating Mosul.