A law outlining the future of the Popular Mobilization Units in Iraq was passed months ago but has yet to be enacted as opposing forces continue their debates. 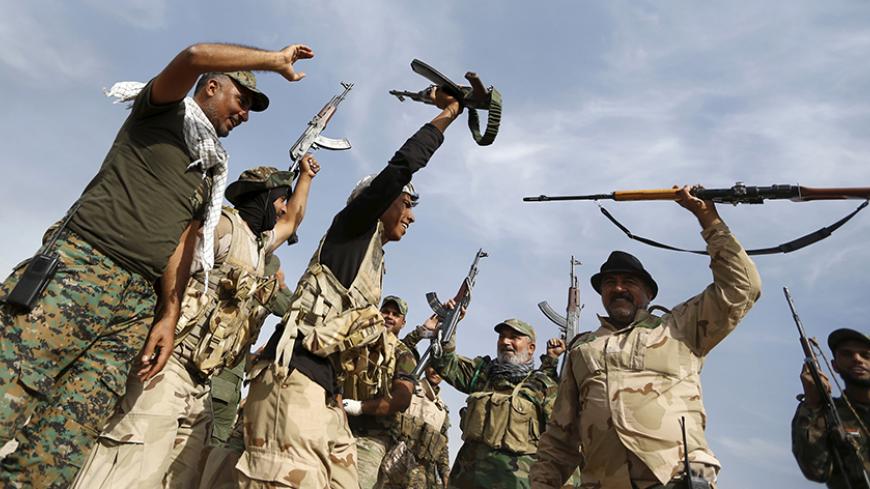 BAGHDAD — As elections draw closer, there's a tug of war in Baghdad over the Popular Mobilization Units (PMU), a mostly Shiite coalition of militias.

Under a law passed in November but not implemented, the PMU was to become an official security body affiliated with the Iraqi armed forces. On one side of the issue, opponents are pulling hard to keep that from happening; the other side wants to expedite the process so PMU members can run for office and otherwise participate in politics.

In Iraq, political parties and entities wishing to run for election must abolish their armed wings. The new law would allow the armed factions under the PMU umbrella to be incorporated into one officially recognized body. As a result, the affiliated parties would become purely political entities without actually dissolving the armed groups.

Unless the law is enacted soon, it will become more difficult for these entities to participate in the September elections. In the meantime, leaders of the armed groups fear opponents will amend or abolish the law. Opposition groups include the Sunni Union of Nationalist Forces (SUNF), which has explicitly called for implementation of the law to be canceled. Also, Shiite Sadrist Movement leader Muqtada al-Sadr, through his “initial solutions” initiative announced Feb. 20, urged that, rather than standing separately, the PMU should be dissolved, and then some "disciplined PMU" fighters could be incorporated into the Iraqi army and police.

Sadr is a rival of fellow Shiite and former Prime Minister Nouri al-Maliki, who is close with the PMU's main groups.

A number of parties already have begun to dissociate from their armed wings by changing their names or slogans. They now even refer to their militias only as the PMU. For instance, the PMU faction Asaib Ahl al-Haq removed the term “Islamic Resistance” from its official name and is now called the Asaib movement, and it also removed the rifle from its official logo.

But before officially dissociating from these factions, Shiite parties will want to understand how large their representation will be within the official PMU organization, as well as the military ranks and posts that will be assigned to the fighters and leaders.

Prime Minister Haider al-Abadi, the commander in chief of Iraq's armed forces, met Feb. 15 with the leaders of some factions to coordinate the PMU law's implementation. They each presented a list of their armed brigades and their sizes. The factions included the Badr Organization, Kata’ib al-Imam Ali, Saraya al-Salam, Kata’ib Hezbollah, Kata’ib Sayyid al-Shuhada and Saraya al-Jihad. The next day, Abadi spokesman Saad al-Hadithi told Almasalah website that when the law was passed, it granted Abadi "the authority to issue the rules and instructions necessary for the implementation of the law."

However, Abadi still faces pressure from some political parties.

PMU spokesman Karim al-Nuri explained the delay to Al-Monitor, saying, “The process of transforming the PMU into an organization according to the law passed by parliament requires the prime minister to form specialized committees to sort and classify the fighters. Such a process needs time and cannot be finalized before the end of the battle of Mosul.”

According to Nuri, political disputes aren't affecting the law's implementation.

“Opposition parties demand the law be amended, rather than completely dismissing the idea or overlooking the factions’ efforts that led to the country’s liberation" from the Islamic State (IS). "Even though some parties voiced opposition to the PMU law, this should not be construed as a reason for delaying implementation, especially since the prime minister vowed to implement the law."

However, the SUNF, in a "document for national settlement" announced March 2, explicitly called for a nationwide reorganization after defeating IS and the abolishment of the PMU.

“Sunni blocs have expressed their opposition to the PMU since the beginning. They even withdrew from the session that addressed recommendations," SUNF leader Dhafir al-Ani told Al-Monitor. "National partnership requires agreement on important and sensitive issues. We have previously suggested formulation of a mutual stance among all the components with regard to the PMU.”

The failure to implement the PMU law can be explained by Abadi’s desire to amend it, or to the success of initiatives advanced by Sadr and Sunni blocs toward abolishing the PMU and incorporating its fighters into Iraqi security forces.

That said, the elections commissions and related bodies are faced with the crucial task of ensuring that political parties do not have armed wings.