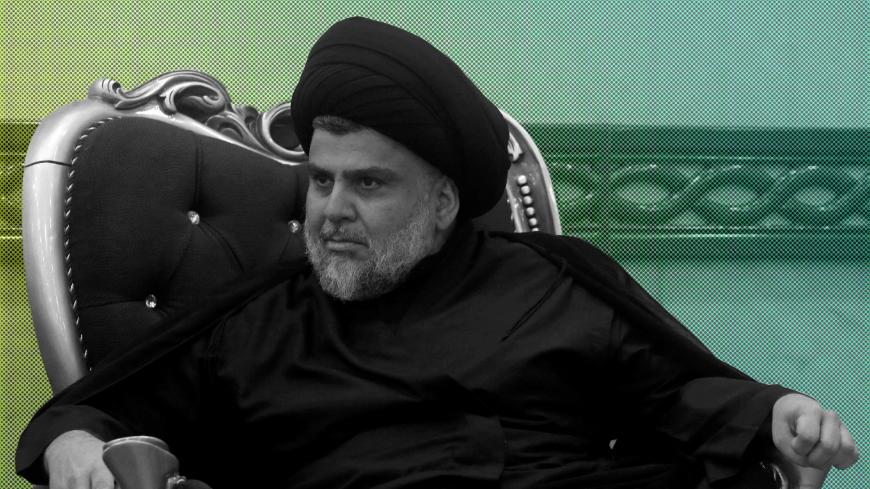 Fayad has been strongly supported by pro-Iran PMU, many of which have fought “unofficially” across the border in Syria, while Sadr and his armed faction Saraya al-Salam have long said that the PMU should operate exclusively within Iraqi borders.

It now seems more likely that there may soon be official PMU involvement in the neighboring country.

Saraya al-Salam has two brigades within the PMU, he said, and about 10,000 of the total 15,000 fighters are spread out between the Sunni-majority city of Samarra, roughly 81 miles north of Baghdad, and around Karbala.

Tamimi claimed that Saraya al-Salam had been requested by locals to take part in the operation to liberate western Anbar from the Islamic State (IS) in late 2017, but the government had not granted approval at the time.

Other PMU that often find themselves in opposition to Sadr politically, such as Kata’ib Hezbollah and Asaib Ahl al-Haq, were instead sent there and still continue to maintain a heavy presence near the border.

Some of these groups continue to hold Sunni areas where they allegedly refuse to allow inhabitants to return, such as in Jurf al-Sakhar. In the Babil province, the town was officially renamed Jurf al-Nasr after it was retaken from IS and continues to be guarded by Kata’ib Hezbollah.

In Samarra, instead, initial wariness by Sunni inhabitants of the Shiite Saraya al-Salam largely gave way to acceptance of the group after property and stolen goods were returned to their owners, Al-Monitor was told when reporting from the town in 2017, though Samarra locals have complained that the area remains too much of a military zone.

In Baghdad, Tamimi said there is no military presence of the group, despite, for example, a sign placed in recent weeks at the entrance to the Karrada Dakhil district proclaiming the presence of Saraya al-Salam there, and that it simply has “offices … for example, for widows to request pensions” or salaries.

While rumors are rife in Baghdad about some armed groups demanding “protection money” from lucrative businesses in certain areas such as nightclubs and “massage parlors,” Saraya al-Salam enjoys a cleaner reputation.

In Samarra, locals have repeatedly told Al-Monitor that the group does not demand bribes.

The Sairoon Alliance brought together Sadr and communists on a reform platform that focused a great deal on corruption, an issue that the Shiite cleric has long stressed must be a priority.

The backing of an armed group in a volatile country with a confusing array of armed factions — even in a context of the best security in many years — can be seen as a sort of guarantee against various possible threats and a "playing card in reserve."

However, a parliament member from Sadr City with Sadr’s Sairoon Alliance — who was previously the director of the Imam Ali Hospital there, Dr. Jawad al-Musawi — stressed to Al-Monitor that Saraya al-Salam is not linked to the political sphere.

He claimed that the armed group simply fulfills its duties as part of the government-integrated PMU and “protects Shiite shrines, especially in the areas of Samarra, Najaf and Karbala.”

Musawi said that “one of the main causes of poor health services in the past four years is widespread corruption in the ministry and management,” and this is a priority that should take precedence over other concerns.

At a recent inauguration for a triage unit set up by the international medical aid organization Doctors Without Borders at the Imam Ali Hospital, Musawi was met with ululation from members of the community awaiting him in the halls of the medical institute awash in posters of Sadr.

He noted in his speech for the event that “there have not been any new hospital facilities built since the 1970s” in Sadr City, despite an exponential rise in the population.

On Sairoon’s staunch opposition to the nomination of Fayad, Musawi told Al-Monitor that the party did not disagree with the choice of Fayad per se, but that it was against any candidate chosen for political instead of technocratic reasons.

Though some inconveniences may stem from Iraq’s lack of an interior minister for so many months, he said, “It is certainly less of a problem than an incompetent person” in the position would be.

The ministries yet to be assigned will greatly affect Iraq’s future security and the extent of the focus on domestic as opposed to regional concerns. How close the ministers are to armed factions within the country, whether they are officially incorporated into the government apparatus and who holds effective control over these factions, is likely to as well.