Baghdad's poor, many of whom voted for Muqtada al-Sadr’s Sairoon Alliance, hope that the election result will lead to an improvement of their daily lives. 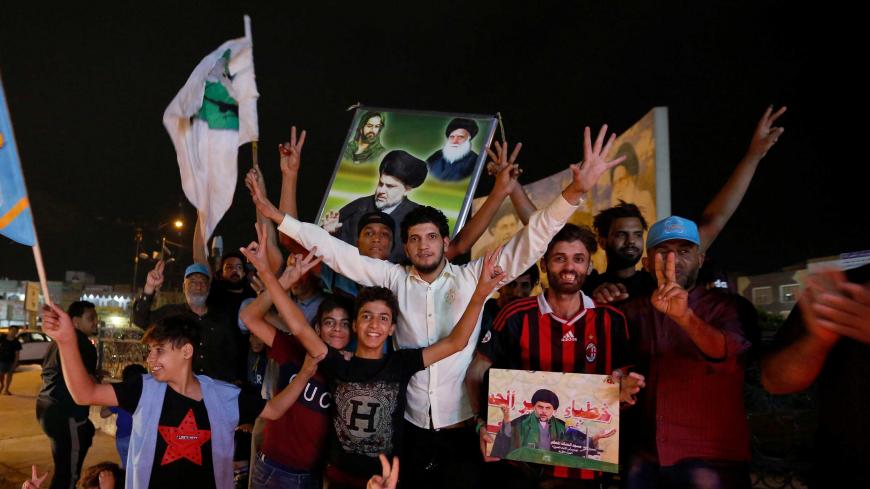 BAGHDAD — Sadr City, the section of the Iraqi capital previously known as Revolution City and then Saddam City, has long been seen as a violent place filled with the disenfranchised.

It is bursting at the seams with an estimated population of some 3.5 million, half the population of Baghdad. High unemployment, dire poverty and a long history of militia violence have made Sadr City a no-go area for many Baghdad residents, despite marked improvement in security in recent years.

On May 12, less than half of the Iraqis who were eligible to vote in parliamentary elections cast ballots. Baghdad’s streets were virtually empty due to hard-to-obtain vehicle permits and most shops stayed shuttered all day; airports and borders also were closed.

Sadr City instead had taxis plying for trade and a fruit and vegetable market open, with a single soldier leaning casually against an armored vehicle nearby. Children played soccer in the square near an office of Shiite cleric Muqtada al-Sadr, whose father, Grand Ayatollah Mohammad Sadeq al-Sadr, was assassinated in 1999.

Late on election night it became clear that Muqtada al-Sadr's Sairoon Alliance, formed with Communists and other unlikely political partners, had taken the lead and might get first crack at trying to form Iraq's next government.

US and Iranian officials soon rushed to Iraq for talks, amid rumors of possible coalitions that might sideline the alliance.

A few days later, on the eve of the holy month of Ramadan, Sadr City residents out shopping seemed upbeat about the results, hoping for a much-yearned-for break with the past. A man who identified himself as half Kurdish at a perfume shop in a covered market told Al-Monitor that his family supported the Sairoon Alliance because of its diverse composition, while two women wearing black abayas who manned nearby vegetable stalls said that accessible health care was the top priority.

One of the women talked about her 18-year-old son who was injured in the fight against the Islamic State (IS) in Beiji, saying her family had not yet received any assistance for dealing with his permanent disability; the other woman, with a backdrop of a photo of Sadr hanging on the stall wall, said proper health care was out of reach for residents.

Notably, one Sairoon Alliance candidate is Dr. Jawad al-Musawi, the director of the Imam Ali Hospital in Sadr City.

Dhiaa al-Asadi, the director of Sadr’s political office, told Al-Monitor that the list is "a reform project that represents the hopes and expectations of deprived and less advantaged people. This project of Sairoon constitutes a paradigm shift and a departure from the established norms that have characterized the political process since 2003." Asadi said the alliance aims to "rescue Iraq."

He said that to do so, the new government would need to "enforce the rule of law, activate good governance measures such as accountability, transparency, openness and so on. But before these measures, corrupt people should be brought to justice and sent to court for trial." He also called for abolishing the ethnic and sectarian quota system and for building institutions based on qualification and integrity, with a dependence on capable technocrats.

Much of the media used to refer to Sadr as a "firebrand," while now the epithet applied to him is "populist."

Roughly two years ago, Sadr’s supporters stormed the highly fortified Green Zone and pushed into the Iraqi parliament to protest stalled reforms that were aimed at reducing corruption; his supporters have long led Friday protests in Baghdad’s Tahrir Square.

Over the years, this Al-Monitor reporter has found that Sadr enjoys cross-sectional support in various unexpected places, such as among some Patriotic Union of Kurdistan officials in Tuz Khormato in 2016.

And unlike other leaders of the Popular Mobilization Units (PMU), Sadr has forcefully stated that the Syrian people have the right to protest and that no Iraqis should be fighting across the border.

Many of the Iran-linked PMUs were originally splinter groups from Sadr’s Jaish al-Mahdi, or Mahdi Army, formed after the US invasion in 2003. Sadr officially disbanded the militia in 2008, transitioning most of the fighters into social activities. In 2014, he reconstituted it in part under the name of Saraya al-Salam (Peace Brigades), which claims to focus on protecting the rights of the disadvantaged and fighting IS.

One member of Saraya al-Salam told Al-Monitor in Samarra in January 2017 that keeping people’s property intact, especially those who have nothing else, was sometimes "even more important than fighting IS."

As reported at that time, the Baghdad-born head of media for Saraya al-Salam in Salahuddin province, Mohannad al-Azawi, told Al-Monitor that the fighters in the city did not receive payment of any kind. He said he was able to afford to be involved since he receives payments as part of a law that compensates those injured by "acts of terrorism and military mistakes." He said he was injured in "the fight against the American occupation in 2008 in Baghdad, as part of Jaish al-Mahdi."

Sadr himself did not run in the May 12 election and will not become prime minister. He will, however, have a major influence on whatever government comes next, even if a coalition is formed that excludes the Sairoon Alliance.

Prime Minister Haider al-Abadi did not do as well as expected in the elections, despite leading a victory against IS and his relative success in handling a sensitive balancing act between external actors in the Middle East, while his predecessor Nouri al-Maliki suffered an 85% drop in support since the previous vote.

Distrust of politicians among Baghdad’s poor runs deep. Though the fight against IS has largely been won, many of those who had relatives killed or disabled in the fighting feel abandoned.

"They are all thieves," one housewife in a Sadr City market told Al-Monitor in regard to the current political class. She said that though she had not voted, she was pleasantly surprised by the outcome. Smiling and nodding toward her young daughter, she added, "Alhamdulillah [thanks to God] Sadr has won. Inshallah we will see change for the future."