The predominantly Sunni city of Samarra, which includes one of the main Shiite holy shrines and is under the control of mostly Shiite militias, continues to be a prime target for IS and criminal groups. 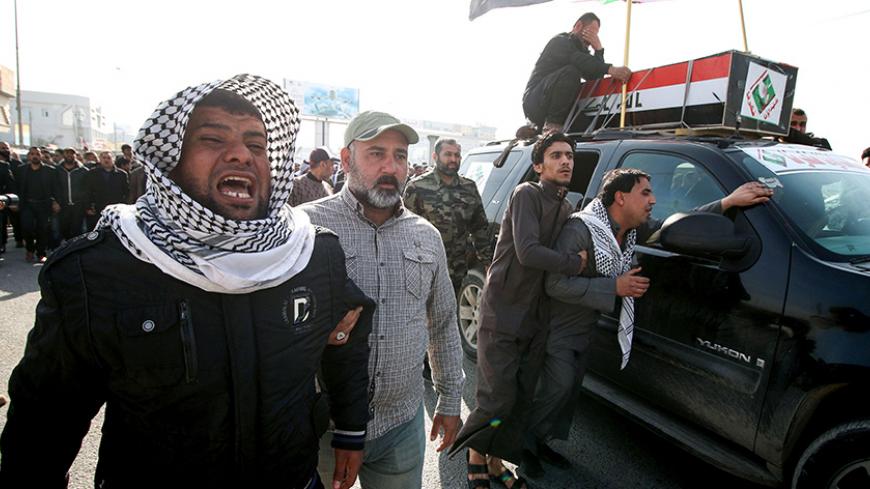 Members of Saraya al-Salam, formed by Iraqi-Shiite Muslim cleric Muqtada al-Sadr, walk alongside the coffin of a fighter who was killed the day before during an attack by IS on the northern city of Samarra, Basra, Iraq, Jan. 17, 2017. - HAIDAR MOHAMMED ALI/AFP/Getty Images

SAMARRA, Iraq — Islamic State attacks continue on police stations and checkpoints in the Sunni-majority city of Samarra that is guarded by the non-local, volunteer Shiite armed group Saraya al-Salam.

Two Jan. 2 attacks left several security officers dead and resulted in a shoot-out lasting into the next day. On Jan. 17, the directorate of military intelligence announced that they arrested the man who had coordinated the attack two weeks earlier with a variety of weapons and explosive materials intended for being used in future attacks in Samarra.

The local media chief for the group told Al-Monitor in an interview some days later that it does not allow other Popular Mobilization Units (PMU) into the area without prior permission after an agreement with the government.

Samarra, roughly 130 kilometers (81 miles) north of Baghdad and 70 kilometers (43 miles) south of Tikrit, is widely known for a 2006 attack on the Al-Askari Shrine revered by Shiites that sparked sectarian bloodletting across the country. IS leader Ibrahim Awad Ibrahim al-Badri al-Samarrai, more commonly known as Abu Bakr al-Baghdadi, was born in 1971 in a village nearby.

An offshoot of the Jaish al-Mahdi militia, which was highly active in fighting US forces following the 2003 invasion, Saraya al-Salam’s fighters originate mostly from areas in the Shiite-dominant south or the traditionally poor Sadr City — named after the family of the armed group’s founder, Muqtada al-Sadr — in the eastern part of Baghdad.

Ón Jan. 2, in addition to the two attacks on police stations in Samarra, a suicide bomber drove into a fruit and vegetable market in Sadr City. The Baghdad attack killed at least 36 people, many of them day laborers.

Saraya al-Salam’s black Humvees with a logo featuring a dove (Saraya al-Salam translates to Peace Brigades) against a flag-adorned map of Iraq logo are ubiquitous in Samarra and frequently seen in cities nearby. Sadr’s sternly rotund, bearded face below a hefty black turban — sometimes shown with an angry forefinger midair — adorns many billboards, flanked by other PMU posters heavy on army fatigues, beards and Qurans. Colorful posters commemorating the "martyrs" of the war against IS line the streets and decorate checkpoints.

The group was formed by Sadr after IS took Mosul in June 2014; it has been key to the success in many battles alongside other PMUs. Though some of these units active in the area have been accused of abuses, including extrajudicial killings, disappearances and looting, Saraya al-Salam seems to come in for less criticism.

"Saraya al-Salam is very selective," Emad Abu Moaml, one of the group’s fighters deployed to the city, told Al-Monitor during an interview. He said he would soon be starting a job as a government employee. "We ask the people from their area what sort of person they are and reputation they have before accepting them."

Abu Moaml, originally from Amarah, a city in southeastern Iraq some 50 kilometers from the border with Iran, said, "We received orders from Sayyid Muqtada al-Sadr to protect civilians who are suffering and their property."

The group claims to attach great importance to giving inhabitants back the money, gold and property they found when they entered the city.

One Saraya al-Salam fighter told Al-Monitor that, prior to their taking responsibility for the security of the city, many inhabitants had buried their valuables and money to prevent theft.

"We found millions of dinars and gold," another fighter, Karim al-Zeidi, said while showing Al-Monitor cellphone photos of stacks of money and gold jewelry. In regard to the dangers they are exposed to, he noted, "We lost 13 of our men in the explosion of one home here, when we entered a booby-trapped house to secure it. The family wanted to go in but we wouldn’t let them until our men had made sure that it was safe."

Keeping people’s property intact is "even more important than fighting IS," he said, stressing that they had sometimes made decisions during the fighting not to target homes, even if they knew an IS fighter was there, to prevent the loss of property.

The Baghdad-born head of media for Saraya al-Salam in Salahuddin province, Mohannad al-Azawi, told Al-Monitor that the fighters in the city did not receive payment of any sort. He said he was able to afford to do this since he receives payments as part of a law that compensates those injured by "acts of terrorism and military mistakes."

He said, "[I was injured] fighting the US occupation in 2008 in Baghdad," as part of Jaish al-Mahdi, Saraya al-Salam’s predecessor. Many others, he said, are government employees who are able to take off a few weeks at a time and use their holiday time to man the checkpoints.

The PMUs, which Saraya al-Salam is part of, have taken on military security duties in other areas and were granted "full legal status" with pensions and salaries by the government in November.

However, Azawi said, "Other PMUs are no longer allowed into the city. They need to get permission from us and we escort them around and out of the city again if they have a valid reason." According to him, this measure was taken after complaints from civilians about some of the other groups.

Another key difference between the group and many other units, Azawi noted, was that their leader, Sadr, has "always been in support of populations rising up against brutal regimes," including across the border in Syria.

In this, it diverges sharply from such groups as Harakat al-Nujaba, Asaib Ahl al-Haq and Kataib Sayyid al-Shuhada, all of which have sent forces to support the Syrian regime in its fight against opposition groups.

Sadr has gained greater prominence on the Iraqi political scene in recent years, leading protests against corruption, and his support has been a deciding factor in many Iraqi politicians’ success. He and fellow Shiite cleric Ammar al-Hakim are expected to play a key role in the provincial and federal elections slated for 2018.

Among the civilians in Samarra whom Al-Monitor was able to speak with about Saraya al-Salam, complaints included that "the city continues to look like a military zone due to their presence, with too many checkpoints," and that they had "rounded up too many young men for questioning" after the recent attacks. But they had been let go since.

Inhabitants of the Sunni-majority neighboring province of Anbar also told Al-Monitor that some people from their area had been kidnapped by other PMUs over a year ago and taken to Samarra, and that Saraya al-Salam and the Iraqi army had secured their release.

In justifying the group’s continued presence and security measures, Azawi said that the city continues to be a prime target for IS and criminal groups, and that "the police are weaker than we are. They need us."