An Al-Monitor interview of members of parliament helps explain why Mohammed Tawfiq Allawi's nomination to become prime minister of Iraq hit the shoals. 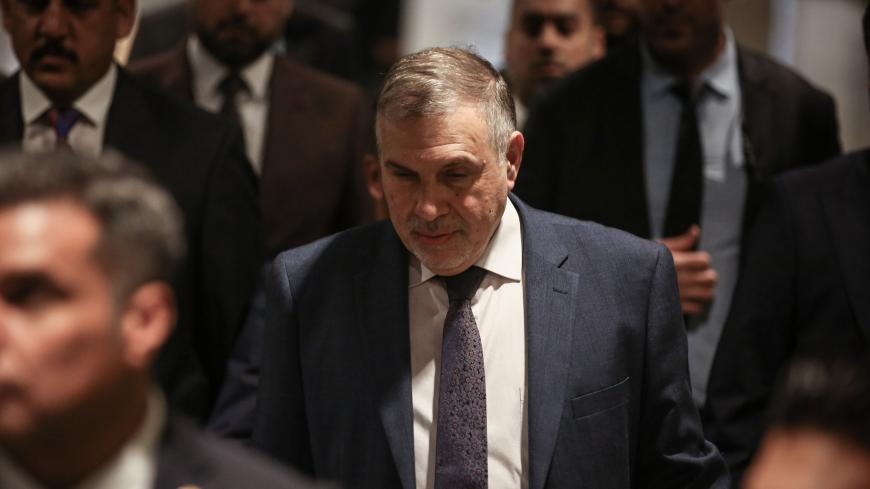 Mohammed Tawfiq Allawi arrives at parliament ahead of a special session for a confidence vote on Cabinet members, Baghdad, Iraq, March 1, 2020. Allawi, who was designated on Feb. 1 to become prime minister pending parliamentary approval, withdrew his candidacy for the post March 2 after failing to get his Cabinet approved. - Ameer Al Mohammedaw/picture alliance via Getty Images

BAGHDAD — In the months since massive anti-government protests began across Shiite-dominant southern and central Iraq in October, Iraqi politicians have been meeting in small groups in the capital late into the night, hashing out new strategies and alliances.

Mohammed Tawfiq Allawi, who had been designated to become prime minister, put together a list of ministers in late February, voting on which was initially to be held Feb. 27. The vote was postponed several times before he withdrew from forming a government early March 2.

Caretaker Prime Minister Adel Abdul Mahdi had said in mid-February that he would quit his post if no prime minister had been approved by March 2.

Allawi had been backed by strong Shiite factions in the parliament, some linked to armed groups incorporated into government forces.

Sunni and Kurdish factions, as well as some Shiite politicians, have long disagreed with the nomination. On Feb. 27, the Sunni alliance under parliament Speaker Mohammed al-Halbusi said it would not be supporting Allawi.

Why did Allawi fail? Some of the answers may come from an interview conducted by Al-Monitor with Mohammed al-Darraji, a Shiite member of parliament who previously lived in the UK, at his Baghdad home during a Feb. 23 late-night meeting with Sunni member of parliament Muthana al-Samarraie.

Darraji, who holds dual nationality and was formerly a minister elected with the Sadrist bloc, stressed that he did “not recommend that [Shiite parties] make the same mistake as they did when they voted for foreign forces to get out of Iraq” without Sunni or Kurdish participation Jan. 5.

During the Feb. 23 meeting, the two legislators discussed small political “teams” they set up to focus on specific objectives and exactly how issues with armed groups should be addressed.

Darraji said that Allawi is “a very good guy but I don’t think he will be able to handle” issues related to the Shiite-led Popular Mobilization Units (PMU) and that “two-thirds of Sunnis do not accept him.”

Allawi “isn’t capable of understanding the situation,” the Shiite legislator said, since he “just came back a month before. He spent [much of] his life in London. He came twice to be a minister, about one year each [time], and then he just resigned.”

Protestors have for months demanded an overhaul of the political class and elimination of the muhassassa system, by which main leadership positions are divided on the basis of religious sect.

While agreeing with some of the protesters’ demands, Darraji cautioned that those demonstrating in the streets “do not represent all Iraqis” and that a major blow had been struck to the country’s economy and industrial interests by the prolonged uncertainty and instability generated by the protesters' actions.

Meanwhile, powerful, thousands-strong Shiite-led armed groups — both those receiving government salaries as part of the PMU and others more closely linked to Iran — have accused the protests of being an attempt to divide the Shiite community “directed by external actors.”

Darraji said his “team” had set itself three objectives: to “manage the risks of the current crisis,” to “explain and reshape the Shiite relationship with international and regional stakeholders, i.e., define Shiite discourse” and “open national dialogue with non-Shiite political forces as the new Shiite leadership generation.”

He said the protests and recent events had further exacerbated relations with the international community and led to a deterioration of the image of the Iraqi Shiite community in a crescendo that peaked in late December and early January.

The Sunni part of the team working closely with them, Darraji said, is led by Salahuddin province native Samarraie.

His family is from Samarra, a place of pilgrimage for Shiite Muslims that is guarded by Sadr’s Saraya al-Salam but inhabited mainly by Sunnis.

Samarraie told Al-Monitor that though he was close to Anbar province native Halbusi, “Sunni leaders neglected the situation in Salahuddin” and that, compared with Anbar, the province had received very little in reconstruction funds due to “officials failing to carry out their duties,” despite “Salahuddin natives sacrificing a great deal for security issues.”

Samarraie said his team includes six members of parliament from Ninevah province and two from Anbar.

Salahuddin province has long differed from Anbar in its stance toward the Shiite-led PMU, which has been accused of fewer abuses in Salahuddin. Many local PMU in Salahuddin also received support from Iran during the fight against the Islamic State, while some of those in Anbar received training and support from the international coalition.

Protesters, especially in the south, often refer to armed groups as “parties” as many of the Shiite militias have taken on more power through their political branches. The demonstrators also express fear of the militias, which are believed to have been behind the killing of protesters, activists and journalists.

However, members of armed groups “need to feel safe to put down their guns,” Samarraie stressed. “Everyone depends on the power of weapons to solve problems now,” he said, and “a new generation [of political leaders] needs to be brought in.”

Darraji said that only by involving armed groups more fully in politics could Iraq get them to stop ruling by fear. He added that some groups such as Kataib Hezbollah have no interest in getting involved in politics and that this must be addressed.

But Darraji claimed that Sadr had backed Allawi to be prime minister “because he is very weak and can be controlled.” Darraji also pointed out that Sadr had threatened to seize the Green Zone if Allawi's government was not approved.