Iraq’s Sunni politicians, who are facing great challenges in managing areas still recovering from the damage caused by the Islamic State, worry that Iran-US tensions will have an added negative effect. 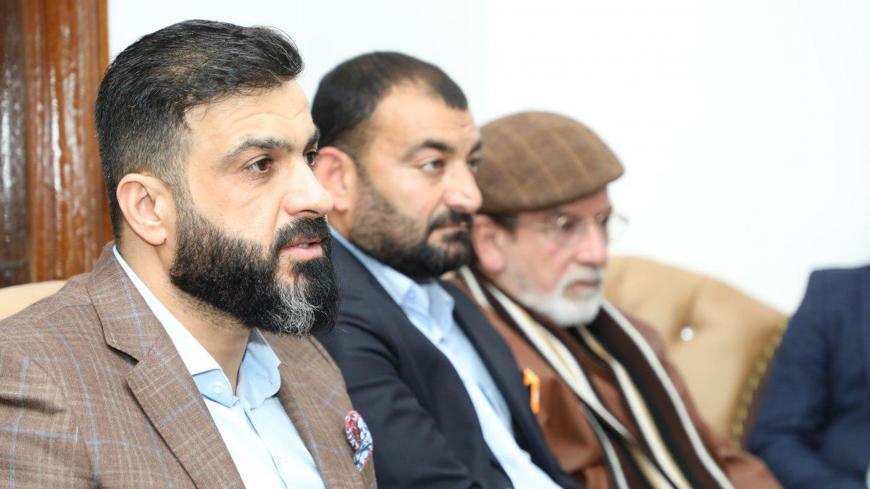 Mohammed al-Karbouli (L), a prominent Sunni member of the Iraqi parliament, meets with representatives of a youth program in Baghdad. Posted Dec. 22, 2019. - Facebook/mohammad.alkarboli

BAGHDAD — As tensions between the United States and Iran escalated in recent weeks, Iraqi Sunnis have for the most part simply watched warily and wearily.

Sunni and Kurdish members of parliament largely boycotted a Jan. 5 parliamentary session on a resolution urging the government to force foreign armed forces out after the outcry that followed a US drone attack at the Baghdad airport that killed Iranian Maj. Gen. Qasem Soleimani and Kataib Hezbollah militia leader Abu Mahdi al-Muhandis.

“We told them at that time that yes, you (Shiite parties) are the majority and we do not hate you. But is this the right decision, against the US, now?” prominent Sunni member of parliament Mohammed al-Karbouli told Al-Monitor in an extended interview in the Iraqi capital Jan. 14.

“And now they are all in Iran and talking there. Engaging in negotiations there, with Iran. And they are saying we simply want to put someone in place as leader and then we will prepare for another election,” he said.

Before the killing of Muhandis, “We were speaking for hours daily about the constitution” as a result of the protesters’ demands, “while now there is a constitutional void and the way Shiites consider themselves rulers of the country will lead the country to collapse.”

Karbouli stressed the need for a strategy behind whatever decision is made and not simply reactions followed by stronger reactions. “If the coalition forces are forced to leave, then we must find alternatives and we must know how to deal with them,” he said. “If the coalition forces remain, then they must remain with only the specific powers granted to them by Iraq.”

“The western region of Anbar, Salahuddin and Ninevah,” provinces all inhabited mainly by Sunnis, “are large areas and contain many Islamic State [IS] hideouts. It will be impossible for the army to deal with them alone in the future” without outside assistance, he said.

“There was a kidnapping recorded a few days ago in the Qaim area. IS fighters attacked a group of civilians and kidnapped three of them. The lack of stability in Syria and in the wider region will be a major problem. We expelled IS from our regions physically but the mentality is still there,” he warned.

In reference to the idea of possibly forming a “Sunni autonomous region” along the lines of the Kurdistan Regional Government area, Karbouli said, “Clearly, we believe in the unity of Iraq” but that “they think an autonomous region means the division of Iraq. I think, personally, that it could be a way to rebuild the country.” He added that the Iraqi Constitution allows for the creation of autonomous regions.

“The central government failed to rebuild the country and make it strong again. It has failed since 2003 in the south and center” and the recent protests in those Shiite-majority areas are “the result of these failures, including the failure to create employment,” he said.

During the interview, the three-time and current member of parliament addressed several issues important to Sunnis, especially in his native Anbar province.

Anbar constitutes roughly a third of Iraq's territory but is sparsely populated. It is, however, rich in untapped resources, Karbouli said.

Anbar is also where Iran-backed, Shiite-led armed groups are accused of committing massacres of civilians and where a major demand remains finding out what happened to men who were forcibly disappeared.

Another member of parliament from Anbar, Yahia al-Mohamedy, who also sits on the legal committee of the lawmaking body, told Al-Monitor in an interview that one of the primary demands of the people in his hometown of Saqlawiyah is to know what happened to the Sunni men and boys who went missing after security forces separated them from women for checks there and at the Razaza checkpoint during the battle against IS. Thousands were never heard from again, he said.

Mohamedy said several of his friends disappeared at that time, including a teacher he had gone to school with, and that Iranian-backed armed groups answering to Iraqi Shiite political leaders stand accused of being behind their disappearance.

That Iraqi Sunnis feel they are treated as “second-class citizens” was voiced by both Mohamedy and Karbouli.

There are differences between Sunni areas, however, including how they were treated during the war against IS.

In Anbar, some of the local Popular Mobilization Units were trained and equipped by coalition forces; however, local fighting groups in Salahuddin have told this reporter that when they asked for help from the United States against IS, they did not get it. Iran, instead, stepped in.

Yazan al-Jabouri, whose local Sunni-led PMU in Salahuddin was widely known for having received arms from Iran and support from Iran-backed Iraqi politicians, scoffed at what he said is a ridiculous idea by Sunni politicians for more autonomy.

“We fought IS with all its military power and crushed its project to create a Sunni region,” he told Al-Monitor in a WhatsApp conversation.

“I don’t think that some politicians with their childish play supported by a Gulf country can succeed in such a game,” he said. He did not want to discuss the tensions between the United States and Iran.

He said Aaly al-Furat Brigade, a local PMU in his native Qaim along the Syrian border, takes orders from the army, “even though it got training and equipment from the coalition and help from me. I helped it but they don’t take orders from me.”

Shiite-led PMUs, on the other hand, get government's salaries but do not take orders from the government, he said.

He said they listen only to their original armed group’s commander, such as Muhandis for Kataib Hezbollah or Qais Khazali for Asaib Ahl al-Haq. Khazali recently was designated a terrorist by the United States.

Karbouli said that although it was “the Shiites that included the possibility of creating autonomous regions in the constitution, now that it goes against their interests they oppose it.”

But he said this may still be an option to help rebuild the country starting from its constituent regions if other parts of the constitution continue to be ignored.