Iraqi Sunnis are weighing whether to vote for candidates on a tribal or party-linked basis, try for independents or maybe not even vote at all. 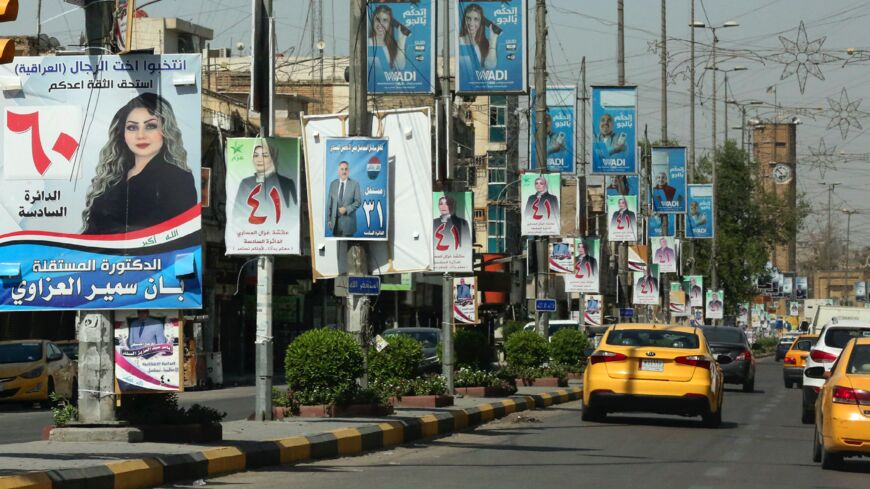 Iraqis go about their day beneath electoral billboards and placards of candidates for the upcoming parliamentary elections, in the district of Adhamiyah in the capital, Baghdad, on Sept. 17, 2021. - SABAH ARAR/AFP via Getty Images

Baghdad streets were teeming by early September with billboards and posters bearing candidates’ faces and the numbers they will be associated with on ballots to be cast in Iraq’s Oct. 10 early elections.

The image seems a nod toward Iraqi youth — a significant part of the constituency and the force behind the massive 2019 protests that brought down the last elected government.

Though those protests were held mainly in the Shia-dominant southern and central areas of Iraq, much of the Sunni community supported their aims but were concerned about being labeled “Islamic State terrorists” if they were to openly call for the downfall of the government.

The government resigned in late 2019, but it took months of a government void before the choice of current Prime Minister Mustafa al-Kadhimi was agreed upon. He took office in May 2020 with a pledge to hold early elections.

A new electoral law was established as one of the results of the protests, which will give independents a chance to compete and divides the country into 83 electoral districts.

Shiite-led parties are as usual likely to dominate the vote, but there has been fierce competition for support between Sunni-led ones as well. Muslims account for an estimated 95% of the country, with an estimated 65% of them Shia and 35% Sunni.

Two of the main parties that are expected to get the bulk of votes from Iraq’s Sunni population are both led by men from eastern Anbar province, which suffered greatly after years under the Islamic State (IS) but has since seen significant reconstruction.

Other Sunni communities across Iraq claim their communities have instead been neglected, Al-Monitor previously.

Parliament speaker Mohammed al-Halbusi, from the town of Garma (al-Karma), heads the Taqaddom Alliance, while millionaire Khamis al-Khanjar is head of the Azm Alliance and hails from nearby Fallujah.

The Azm Alliance will be taking part in the elections for the first time and will include a large number of parties such as al-Hal under Jamal al-Karbouli (Mohammed’s brother, previously close to Halbusi), parties led by Sunni political leaders from other provinces such as Salahuddin parliament member Muthanna al-Samarraie, and several former and current ministers and parliament members.

Another alliance competing for votes is the National Salvation Project under Osama al-Nujaifi from Ninevah province.

The position of prime minister in Iraq has long been set aside for a member of the Shiite community, that of parliament speaker from the Sunni community and the president from the Kurdish community. Thus, Halbusi currently holds what can be considered the highest position a Sunni politician in Iraq can strive for.

Both Halbusi and Khanjar have at different times been criticized for alleged close links to Iran. Many have cited suspicion at Halbusi’s rapid rise to being the youngest speaker of the Iraqi parliament, a role he took on in September 2018, and he has worked closely alongside some Iran-linked parties in parliament.

However, in 2018 when he was still governor of Anbar, he repeatedly criticized the role played by Iran-linked armed groups in the province in two interviews with this journalist.

Since the previous elections in 2018, Khanjar has been seen as close to Iran-linked parties and individuals. Iran’s foreign minister, Mohammad Javad Zarif, also visited Khanjar’s home in Baghdad on April 24 this year.

On December 6, 2019, the U.S. Department of the Treasury’s Office of Foreign Assets Control designated Khanjar for “bribing government officials and engaging in corruption at the expense of the Iraqi people.”

Many are concerned these elections will once again see a low turnout. Turnout for the 2018 elections was only 44.5%.

The spokesman for tribes in Salahuddin province, Sheikh Marwan Jbara, told Al-Monitor Sept. 24 he considered the upcoming elections “crucial” for the future of the country but noted “voters in Sunni areas are stuck with two choices: either they choose a relative” or someone from the same tribe “running for office, or they opt for a candidate of a party they do not believe in.”

He noted most voters have no idea of what the electoral platforms are of the various parties and candidates, and “enormous sums” have been put into the election campaigns with allegations of vote buying also circulating.

“There are pressures from parties arriving from Baghdad that have military branches operating on the ground” in Salahuddin province, he said, alluding to Shia-led armed groups close to Iran, “resulting from the events of 2014 (the IS takeover of large parts of the country and the response to it). They will obtain a number of seats under the influence of uncontrolled weapons” circulating in the area and the fear this invokes.

“The general mood in Sunni areas is distrustful of current politicians and voters are trying to choose independents,” but these candidates will find it difficult, he said.

Al-Monitor also spoke via WhatsApp on Sept. 23 with one of the top sheikhs of the Jughayfa tribe, Sheikh Awwad, in the town of Haditha in western Anbar.

Sheikh Awwad had run in the 2018 elections himself but is not running in this one. He said the tribe is supporting the current minister of planning, Khaled Battal, who is part of the Taqaddom Alliance. But he said there are widespread concerns about potential voting fraud.

Many in western Anbar follow the indications of their tribal leaders on whom to vote for, as they often trust them to advocate for their areas.

The posters for Taqaddom candidates across the Iraqi capital tend to have the symbol of a judge’s gavel featured prominently. Many within the Sunni community lament a general lack of justice in the country and have been asking for years about what happened to the thousands of men and boys who were presumably either killed or arrested, but about whom still nothing is known almost four years after IS was declared defeated in Iraq.