PMU pitches in as COVID cases surge in Iraq

Iraq’s Popular Mobilization Units, including those of populist cleric Muqtada Al-Sadr, have plugged gaps in Iraq’s response to the COVID-19 pandemic as cases surge and well-known fighters fall ill. 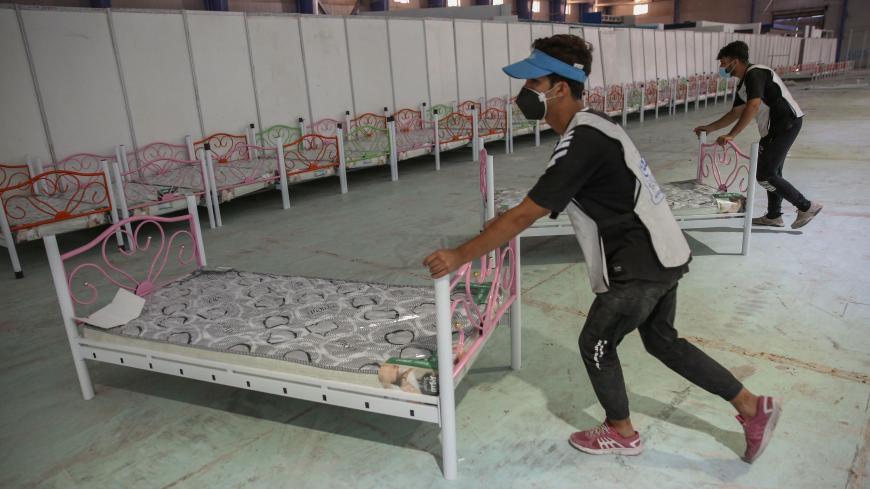 Iraqi volunteers with the Aqiq Institution for Charity work on building a 525-bed field hospital at the Baghdad International Fair exhibition center in the capital Baghdad, on June 21, 2020, a facility the association is setting up as part of the efforts to curb the spread of the COVID-19 pandemic. - AHMAD AL-RUBAYE/AFP via Getty Images

Iraq’s Popular Mobilization Units (PMU) have rehabilitated a hospital, buried victims, sprayed public places with disinfectant and delivered oxygen in recent weeks as part of the nationwide efforts against the COVID-19 pandemic.

From a few dozen recorded deaths per day on June 11 to almost 100 per day a month later, COVID-19 cases continue to rise in the country amid worsening poverty, unemployment and financial hardship.

On July 2, the International Rescue Committee noted, “With the number of confirmed cases standing at 53,708 on July 1 — up from 6,868 on June 1 — the Ministry of Health has announced that hospitals are almost at full capacity” and “schools and universities will be converted into isolation units.”

Dr. Jawad al-Musawi, a parliamentarian from Baghdad’s impoverished Sadr City, told Al-Monitor in a July 12 Whatsapp message that Muqtada Sadr’s PMU faction Saraya Salam had “given their largest headquarters in Iraq to the Ministry of Health” to be used to fight COVID-19, rehabilitated a 317-bed hospital and taken part in campaigns to reduce the spread of the virus among the poor.

Prime Minister Mustafa al-Kadhimi and Musawi attended the handover of the hospital on July 5.

Musawi, who was previously the director of the Imam Ali hospital in Sadr City and was elected with Sadr’s Sairoon Alliance in May 2018, noted that the “Ministry of Finance is struggling to finance the Ministry of Health” sufficiently to be able to deal with the crisis. He added that no new hospital had been built in Sadr City in the past 40 years despite massive population growth.

Haji Qusay al-Rubaye, head of the Baghdad office of the PMU Kataib al-Imam Ali (called KIA or Brigade 40), told Al-Monitor in a July 11 interview via Whatsapp that KIA had started providing humanitarian aid to the population at the very beginning of the crisis in February.

He said the faction had given about 150,000 aid packages to the poor, produced masks and gloves and disinfected streets and public places.

Now, he said, the group is providing oxygen to several hospitals as well as delivering oxygen tanks to those quarantined in their homes. He noted that all the funding for the KIA's help during the crisis has come from private donations.

“Unfortunately, many of the [fighters] have fallen ill — 25, I think. I bring them food and oxygen and whatever they need,” Rubaye told Al-Monitor, his voice slightly shaking.

After a photo of the enormously muscular and well-known KIA fighter known as Abu Ezrael lying on the floor hooked up to oxygen appeared on social media, the PMU issued a statement noting that many among its ranks had been affected.

Meanwhile, another PMU faction, the Imam Ali Combat Division (IACD), is busy digging graves in a new section of Iraq’s Wadi al-Salam cemetery. Spokesperson Taher al-Musawi noted in July 12 Whatsapp messages to Al-Monitor about the “new Wadi al-Salam” is located on land granted by the local Najaf government after the “old Wadi al-Salam became full.” One section of this cemetery, said to be the largest in the world, is now set aside for COVID-19 victims, he said, with graves paid for by the IACD.

The IACD, also known as the 2nd Brigade, is led by Sheikh Taher Al-Khaqani and is one of the "shrine unit" PMUs.

Musawi noted that on the initiative of Khaqani and after “an invitation to do so by Grand Ayatollah Ali Al-Sistani," the IACD had "begun preparing the dead and burying them,” ensuring that all religious obligations are fulfilled including the ritual washing and shrouding of the bodies as well as praying over them.

Rubaye stressed that some functions of the KIA had always been focused on helping civilians and that he, for example, has nothing to do with fighting. He noted, however, that the KIA continues to “fight terrorism” in the north near Mosul.

Federal police officers often stopped at PMU medical facilities along the road between Baghdad and Mosul for medical care and treatment of old wounds when this journalist rode with them in 2017 to the front lines in the final weeks of the battle for Mosul. The PMU also provided aid to the civilian population in some areas at that time.

During the operations to liberate Iraqi territory from the Islamic State from mid-2014 until late 2017, when victory against the group was declared in the country, some PMU factions were accused of major human rights violations.

They are nevertheless widely acknowledged to have played a key role in liberating territory from IS.

According to a July report by Iraq Security and Humanitarian Monitor published by Enabling Peace, “A new study by Iraq’s Planning Ministry indicates that 4.5 million Iraqis are at risk of experiencing poverty as a result of the economic crisis triggered by the pandemic”. The International Rescue Committee noted that a recent survey it had conducted found that 87% of respondents had lost their jobs.

The PMU are helping to deal with the COVID-19 crisis mainly in southern and central Iraq, areas hit by major anti-government protests that started last autumn and resulted in the fall of the previous government in late 2019.

Some PMU factions have been accused of killing protesters, while others openly declared their support for them, providing food and other assistance.

Created as they were by a religious fatwa, many among the PMU forces say they consider helping those suffering a duty.

“Anyone who calls us and is sick, we won’t say no,” KIA’s Rubaye claimed. “This is our duty.”