As death has become even more a part of daily life in Iraq with the increasing violence and terrorist attacks, people started marketing plots at Al-Salam Valley cemetery, which holds religious significance. 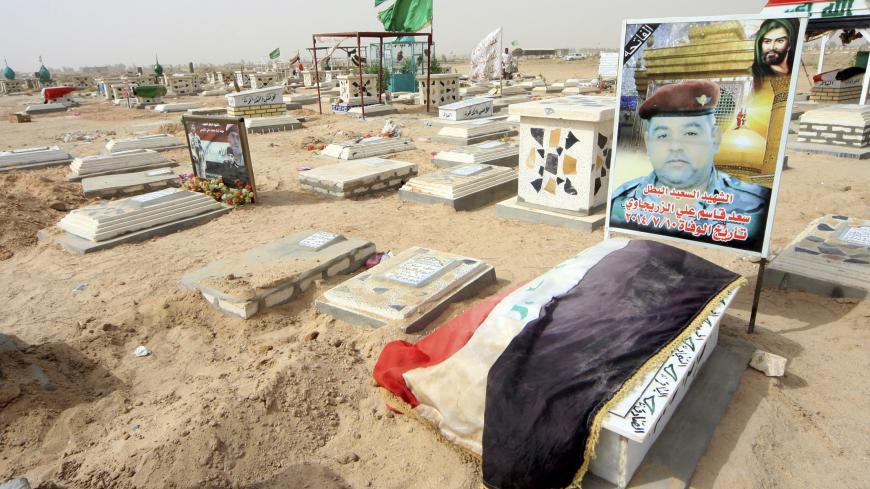 A grave of an Iraqi soldier is seen at a cemetery in Karbala, southwest of Baghdad, Sept. 30, 2014. - REUTERS/Mushtaq Muhammed

BAGHDAD — The features of death are seemingly found wherever one goes in Iraqi cities. In Baghdad, walls are covered with black banners with names of the dead, some of whom were killed in the war against the Islamic State (IS). Of these, most were members of the Shiite militias fighting alongside the security forces. The banners also carry the names of people killed in explosions over the last three months, as well as the names of victims of the tribal battles that have recently increased. These usually start as minor brawls but can develop into large-scale battles.

Death has become even more a part of everyday life in Iraq as it haunts Iraqis on the streets, in squares and in markets, claiming the lives of hundreds of people on a monthly basis. The security situation has not calmed down since the invasion of Iraq in April 2003. Terrorist attacks against civilians are increasing in ferocity, and IS has seized about a third of ​​the country's area, imposing a gloomy, fear-filled atmosphere.

This situation has brought about a new attitude toward the concept of death, as people have become very familiar with what was once a taboo subject. For example, mobilization songs against IS talk about death. A young singer, Salah el-Bahar, sang a song where death was so familiar that he even took a picture with it!

During the sectarian fighting that broke out between Sunni and Shiite armed groups in Iraq in 2006 and 2007, the cheapness of death led Iraqi citizen Saadoun al-Fatlawi to buy a plot so that his children and he could be buried in Al-Salam Valley cemetery in Najaf province. At the time, Fatlawi had concerns over not finding a place to be buried in after seeing sidewalks and roads full of dead people.

Fatlawi, a retiree who worked in the Ministry of Commerce, paid $500 for a cemetery plot that can accommodate about six bodies. To his surprise, however, when he wanted to buy an adjacent plot for his brother, the price had exponentially increased. Fatlawi purchased his land in 2007 and started looking for a plot for his brother about three months ago.

In an interview about the price of land in the cemetery, Ali al-Amaya Kaabi, a gravedigger in Al-Salam Valley cemetery, told Al-Monitor: “Prices rose after the fall of the city of Mosul in June 2014 to about $3,000 per gravesite.”

Kaabi represents a trend in Iraq. He created a page on Facebook and published pictures of gravesites with their corresponding prices. He even offered discounts for the burial of victims who were members of the Popular Mobilization Units fighting IS.

Kaabi, 35, buries about three people a day, most of whom are victims belonging to Shiite factions. He inherited his profession from his father and grandparents, and said, “I have buried about 5,000 bodies in the last 15 years.”

Kaabi said he was “poor and destitute” before he digitized his job. He said he got clients thanks to his Facebook page and has become known.

As Kaabi’s Facebook page has more than 30,000 likes, he pointed out that well-known tribal leaders are contacting him to bury their dead and get plots close to the shrine of Imam Ali ibn Abi Talib — the Prophet Muhammad’s cousin, located inside Al-Salam cemetery — at good prices.

Al-Salam Valley cemetery is one of the largest cemeteries in the world, and is home to about 7 million tombs, stretching over an area of ​​17 square kilometers (10 square miles). This area has been widening because of the increasing numbers of dead people falling prey to violence.

Kaabi is widely condemned by Iraqi society as his posts call on people to wish him luck in his job. However, he ironically says that “burying is a profession like any other. I forgive all those who are insulting me on my Facebook page.”

Asked to comment on this, Nashwan Mohammed Hussein, a social worker, said that “burying the dead is a profession with economic profits. But since it is associated with death, it raises the ire of the people,” and explained that “it is not strange or wrong for gravediggers to have Facebook pages if this helps increase their profits.”

Concerning the phenomenon of land purchase in the cemetery, Hussein told Al-Monitor, “It is strange that even in their graves, Iraqis are interested in their social status,” and pointed out that “those who are not buried in Al-Salam Valley cemetery or in a place related to it are criticized by the community or perceived with disdain.” Al-Salam burial sites are considered prestigious by Iraqis, especially Shiites.

“The religious custom calling for the burial of the dead in this cemetery made it overcrowded and prompted many people to purchase plots [in Al-Salam Valley] prior to their death to guarantee a spot in this holy land,” Hussein said. It is worth noting that Shiites believe that when resurrection time comes, Imam Ali ibn Abi Talib will intercede with God on the dead’s behalf if they had made mistakes during their life on earth.