Militarization of Iraqi society is intensifying

The fight against the Islamic State is leading increasing numbers of civilians to take up arms and defend their territory. 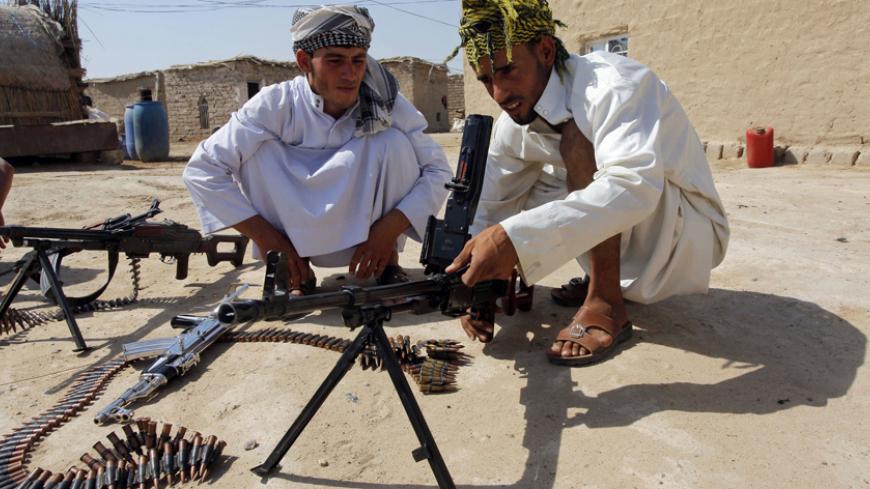 Shiite volunteers, who have joined the Iraqi army to fight the predominantly Sunni militants from the radical Islamic State, participate in weapons training in Najaf, July 18, 2014. - REUTERS/Alaa Al-Marjani

BABIL, Iraq — Hassan al-Saadi, an elementary teacher in the Mahmoudiyah district south of Baghdad, pointed at the banners hanging on the facades of high-rises. “The banners praise the popular mobilization forces and the army," he told Al-Monitor. "Meanwhile, the banners along the road in the southern part of Baghdad toward the central and southern cities have slogans in favor of political parties and warring factions.”

One of the banners depicted fighters digging a trench in southern Baghdad, in Jurf al-Sakhr. Some officials, such as Karbala Deputy Gov. Jassem al-Fatlawi, say that the trench has prevented Islamic State (IS) fighters from infiltrating Karbala, the city holy to Shiites that lies near Jurf al-Sakhr, which was liberated from IS on Oct. 26, with IS fighters getting pushed out toward the Ramadi desert.

Another banner honored Iraqi army soldiers killed in the battles around Babil and Karbala against IS. The banners illustrate how civil life in Iraq is gradually being militarized. Ali Hassan, a lieutenant in the Iraqi army, told Al-Monitor, “The militarization is only natural, as the country is in a state of war, and all efforts must be harnessed to achieve victory.”

Hassan is unsurprised by the military mobilization among the people. “The religious authority [Grand Ayatollah Ali al-Sistani] has called upon people to take up arms,” he said. At Friday sermons, there has been a great deal of focus on “religious mobilization and calls to volunteer on the war fronts,” Hassan said. Shiite religious authorities have couched the fight against IS as a religious war.

Jawad al-Shamari, media director of Iraq’s Human Rights Commission, said, “The war’s effects are visible in most Iraqi homes, with people following ongoing battles via the media. Some are also taking up arms since they do not feel safe.”

In Najaf, Sayyed Ali, an undertaker at the Wadi Salam cemetery in charge of burying fighters killed in battle, told Al-Monitor, “This big cemetery receives dozens of victims daily, which brings to mind the wars that befell Iraq during the 1980s.” For writer Hussein al-Jaf, however, “The ongoing buildup and militarization are strongly reminiscent of the pre-2003 period, during the fall of Saddam Hussein’s regime. A sense of frustration and a bleak view of the future have become prevalent among Iraqis.”

In Hillah, the hub of the Babil governorate, the markets and squares are filled with men wearing military attire. Some fighters have been taking up positions in civilian areas.

“This war will lead to a long-term militarization of society,” Fadel Falih, a social and academic researcher, told Al-Monitor. “We used to believe that the Iran-Iraq War, which broke out in 1980, would be over in a few months, but it dragged on for eight years, claiming the lives of more than a million people.” He added, “Many people believe that history is repeating itself with the ongoing war with IS.”

Subhiya Sheber, a writer, told Al-Monitor, “The pace of militarization has been escalating since IS’ invasion of Mosul, in June 2014. The wars have strengthened the culture of violence in Iraqi social life and in education at school to the extent that those who are inclined to be violent are depicted as heroes, while those who respect others are seen as cowards and fearful.”

Having observed the increasing number of civilians taking up arms, writer Lamis Kadhem said, “The extremist movements, starting with al-Qaeda, have imposed their presence and rules in most of the cities, and this has been reflected in residents' daily lives. This is not to mention the panic and horror in the cities, making people live in a constant state of war.”

Along the agricultural road between the city of Hilla and southern villages, Al-Monitor counted about a dozen mourning observances, indicators of the increasing number of deaths among the ranks of the Iraqi army and others fighing IS. All the mourning banners described the dead men as martyrs, who according to Islam and Iraqi social custom deserve to enter heaven for dying while defending their country.

Besides the name of the deceased, the banners also note political party and military affiliations. Some have died while fighting alongside the army, others with Iraqi Hezbollah, the League of the Righteous or the popular mobilization forces.

Fouad Nasser Ibrahim, a civil activist, told Al-Monitor, “Conditions in Iraq, in light of the ongoing wars, have hampered the establishment of civil society. Iraqi politicians have also undermined the issue of terror, which has led to the spread of violence, and thus comprehensive military mobilization.”