In the historic towns of Babil and Karbala, religion has come to determine every aspect of social life. 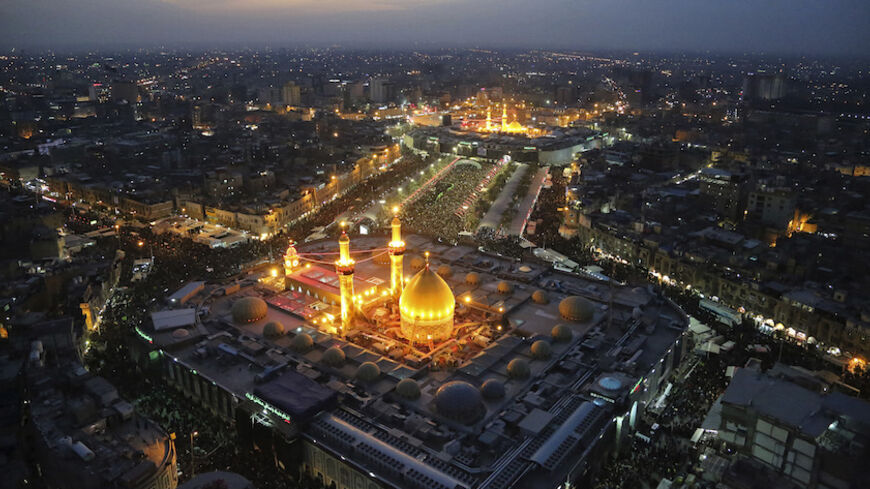 An aerial view shows the shrines of Imam Abbas and Imam Hussein during the commemoration of Arbaeen in Karbala, Dec. 13, 2014. - REUTERS/Abdul-Zahra

BABIL, Iraq — When Ayman Hussein is not at the University of Babylon pursuing a degree in engineering, he spends his time receiving religious lessons in Shiite Islamic jurisprudence, known as fiqh. Hussein, 30, is always busy reading the Quran or visiting the mosque throughout the day to pray. He listens to a variety of religious programs online and via satellite TV, and whenever he has the time, he goes to preaching councils, such as the Husseiniya councils, to attend Quran reading sessions and events commemorating the martyrdom of Shiite Imam Hussein ibn Ali.

Hussein spends his time in an almost continuous cycle of religious activities. He told Al-Monitor, “Even when I commute to university, the bus that I [take] with my peers has the radio tuned to religious poems and Quranic verses. … Each weekend, the same bus drives us to holy places in Karbala and Najaf as part of the contract with the driver.”

It has become commonplace among Iraqi youths to practice religious rites, memorize Quranic verses and adopt chaste physical appearances, such as wearing beards and black shirts. These trends show that youths have been subsumed by the religious wave sweeping through Iraq and the region that has prompted an Islamization of daily life.

Further highlighting this conservative shift, no artistic events — such as concerts and other performances — are taking place in Iraq.

Journalist Alaa Coli of the Dhi Qar governorate told Al-Monitor, “There aren't any cinemas anymore in most Iraqi cities, except in Baghdad, where most of them were shut down. … Cities in the western part, such as Ramadi and Fallujah, are devoid of any entertainment like theaters and cinemas. [They] have been replaced by mosques all over.”

As a response to this trend, Medhati and a group of visual artists held an exhibition on the sidelines of the religious Springs of Martyrdom Festival. Medhati’s paintings included the immortalization of the assassination of the inerrant Imam Hussein. Local authorities held the Springs of Martyrdom Festival to show their interest in art that serves religious purposes — and to get people's votes.

On the campus of the University of Babylon in Babil, green and black religious flags — the kind that have been used by Muslims throughout history — flutter, and photos of holy Muslim figures hang from walls. Religious slogans are everywhere, and the university’s mosque is filled with students.

Ali Kazem, a history student at the University of Babylon, inflicted bruises on his head during Arbaeen, the commemoration of Hussein's martyrdom. He told Al-Monitor in Karbala, “This is the least I can do for my holy figures.”

Youth centers and social gatherings in Babil teach prayers and offer religious lessons, while unveiled women are forbidden from entering the grounds of religious centers. Unveiled women are scarce at universities, as well as at public and private institutions, which hold feasts on religious occasions such as the anniversaries of the deaths of the Prophet Muhammad and Imam Ali bin Abi Taleb.

Zeinab Hassan, a researcher who specializes in family and social affairs, told Al-Monitor, “Religious influence is one of the reasons encouraging youths to volunteer in the battle against the Islamic State (IS), in response to the orders of the country’s supreme religious authorities. … The youths prioritize their religious beliefs over their patriotic call to defend their country, considering the war a fight for ideological existence above all.”

Kifah Ali, 25, who returned in April from the battle in Syria, told Al-Monitor, "I joined the jihad to defend the Shiite sanctuaries."

Ali fought in the Damascus countryside, where one of the most important Shiite mosques in Syria, Sayyida Zeinab’s shrine, is located. Since his return, he has volunteered in the ranks of armed Shiite factions fighting IS.

Ali wore a green headband, on which he wrote a religious expression urging to martyrdom. He told Al-Monitor, “Raising the banner of Imam Hussein, we advance to the front lines.”

Cleric Amin al-Yasiri told Al-Monitor, “Religious faith in Iraq has contributed to facing IS and defeating it in Jurf al-Sakhr, south of Baghdad.”

Reporter and academic Majed Shukr told Al-Monitor, “Media outlets play a major role in religious mobilization and pushing people to religiosity. … Most Iraqi channels and local stations broadcast religious programs around the clock, while love songs are no longer being played.”

Safaa Bassem, owner of a CD and DVD shop, told Al-Monitor, “Religious songs are the trend now, and they are largely requested.” Bassem said that he wouldn't dare play love songs, even inside the shop, due to the objections of extremists and fanatics. “Last year, a member of Ahl al-Haq group visited my shop and asked me not to sell tapes and romantic CDs because they are morally forbidden.”

Religion has come to dominate daily life in Iraq, as many youths have adopted religious traditions to organize the details of their lives. Religion is no longer limited to rituals of worship practiced at specific times. People seek to build Shiite mosques among neighborhoods and towns, and millions of people participate in religious events such as the commemoration of the martyrdom of Imam Hussein.