The child soldiers fighting to stop the Islamic State

Iraqis are divided between supporters and opponents of the participation of young people in the war against the Islamic State. 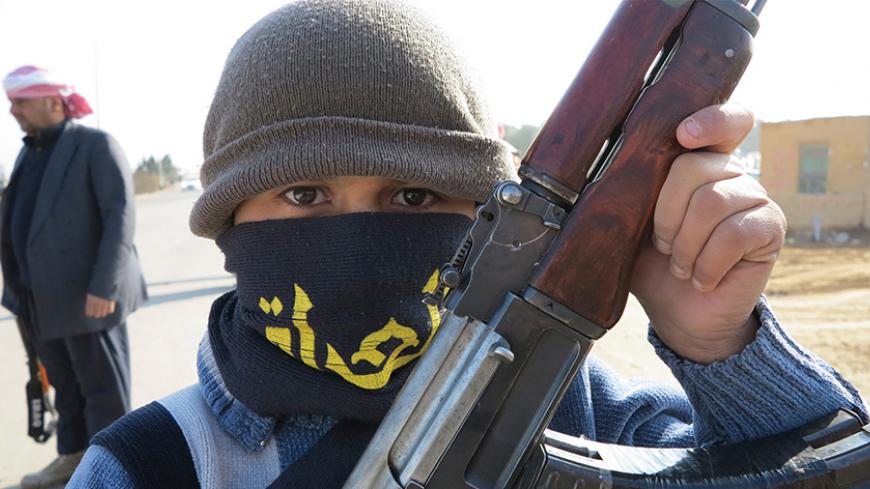 A boy holds his Kalashnikov rifle on the streets of Ramadi, Jan. 6, 2014. - REUTERS/Ali al-Mashhadani

BAGHDAD — Iraqi boys under 15 years old are joining, and dying, in the fight against the Islamic State (IS), despite a UN protocol forbidding their recruitment.

The UN Commission on Human Rights protocol stipulates recruits must be at least 15 years old to join any armed forces, but this protocol clearly has been violated for years. In the city of Karbala, 50 miles south of Baghdad, 13-year-old Saad al-Husseini joined the government's Popular Mobilization Units in December 2013 and volunteered to fight alongside his father in the nearby Jurf al-Sakhar area, where fierce battles liberated the area from IS on Oct. 25, 2014.

Just like Husseini, dozens of other boys have volunteered to fight in the units and the Iraqi army in the war against IS — many in response to a jihad fatwa issued by religious authority Grand Ayatollah Ali al-Sistani on June 13, 2014, writer and media figure Abofiras Alhamdani told Al-Monitor.

"The fight against IS has a religious peculiarity, as most of the youngsters who have volunteered have done so based on Sistani’s [fatwa], which granted religious legitimacy to their participation,” Alhamdani said.

The participation of youngsters below the legal age gives “a bad impression on the battle waged by Iraqis against terrorism,” Alhamdani added. He called on the Iraqi parliament to “enact laws to prevent youngsters from going to the battle fronts, especially since there are sufficient numbers of fighters.”

Another example of society’s support for youngsters who are enthusiastically joining the fight for ideological reasons concerns 15-year-old Muthana Qassem al-Kalabi, who participated in Iraqi forces' battles against IS in the Beiji area, 125 miles north of Baghdad, which started in June 2014. Kalabi died in the fighting Oct. 21, 2014, and many paid tribute to his involvement and death in the battle, given his young age. His death was deemed a model of sacrifice.

This position is supported by Firas al-Kurbassi, media director for the city of Najaf. Kurbassi told Al-Monitor he is in favor of this trend, and he even described it as a duty. “Defending the homeland is not the duty of adults alone. It is the duty of whoever can bear arms,” he said.

League of Righteousness leader Jawad al-Talibawi also told Al-Monitor that “young fighters deserve all the appreciation, and those of them who died are martyrs who deserve memorials.” Talibawi said that “Islamic law asks us to fight for the support of our religion and homeland regardless of our age.”

Haqi Kareem Hadi, president of the Protection and Development of Iraqi Family Association, told Al-Monitor, “The participation of children and youngsters below the legal age only leads to militarizing and dragging the society toward further violence.” He pointed out that his association, being a civil society organization, demands that “only those above 18 volunteer in the war.”

The recruitment of child soldiers is part of the current political ideology of Islam shared by Shiites and Sunnis, and it is fueled by religious jurisprudence and sectarian divisions that have become prevalent in the Middle East.

IS has forced children to fight among its ranks in areas under its control in Iraq and Syria. Various media have reported that IS has recruited or kidnapped around 400 children into its youth force, Cubs of the Caliphate.

There are many examples of such behavior, and international organizations are well aware of them. A video broadcast Aug. 15, 2012, shows children recruited by the Free Syrian Army firing rockets at the ruling political regime's army.

Human Rights Watch, a nongovernmental human rights organization, had warned against such developments on June 23, 2014. The organization said it was against the Syrian opposition recruiting children in the battles and deemed this as tantamount to a “war crime.”

Some Iraqis believe the recruitment of boys is limited and does not constitute a wide and serious phenomenon.

“The Popular Mobilization Units only include a handful of fighters who are below the legal age set by international laws, and their enthusiasm stems from their desire to defend their homeland and ideology. Iraqi forces do not need these young fighters as they already have sufficient numbers of volunteers,” Cleric Abdul Hussein al-Yasiri of Karbala told Al-Monitor.

“According to Islamic law, when there is a sufficient number of fighters who can fight the enemy, then the rest do not have to carry out this duty,” he added.

The sufficient number that Yasiri referred to was confirmed on June 21, 2014, by Popular Mobilization Units sources, who said there were 2.5 million volunteers willing to fight in their ranks against IS.

While Yasiri downplayed the prevalence of this phenomenon, Jawad al-Shammari, the media director for the UN refugee agency in Iraq, told Al-Monitor, “There are youngsters who volunteered to fight in the conflict zones in Iraq despite being below the legal age.”

Shammari pointed out the importance of putting an end to this phenomenon. “The volunteering age should be clearly determined, while children and youngsters below the legal age should be prevented from volunteering. This can help prevent any violation of international treaties and any encroachment on human rights,” he added. 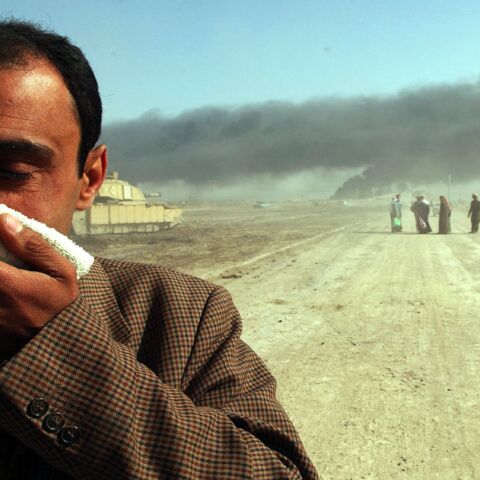