The Iraqi parliament’s decision to establish a National Guard that would include all sects has been criticized by those who consider it an opportunity for terrorists to join the forces and further exacerbate the sectarian tensions in the country. 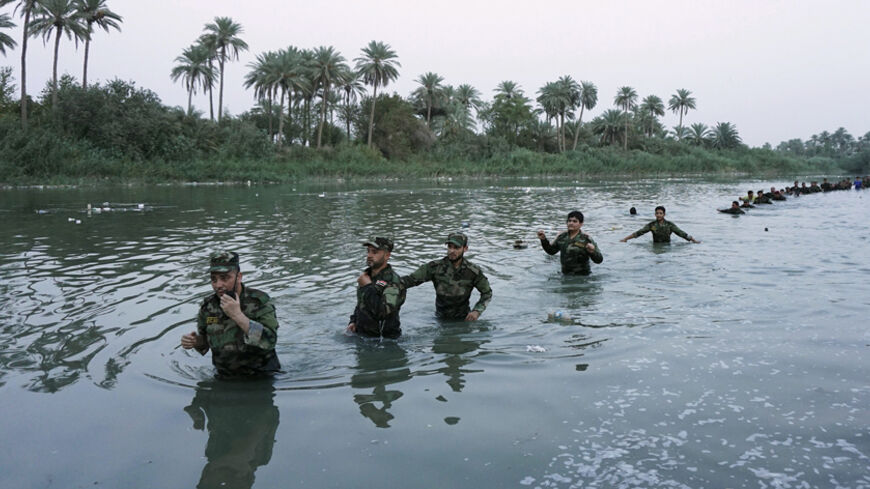 Shiite volunteers who have joined the Iraqi army to fight against militants of the Islamic State take part in field training in Najaf, Aug. 20, 2014. - REUTERS/Ahmad Mousa

Aymen Hassan is getting ready to land a steady job with the National Guard forces, after taking the first step to secure a monthly income by joining the ranks of the “popular mobilization.”

Like Hassan, thousands of young Iraqi men who are unemployed are enticed by the announcement of the new security formations, which they see as an opportunity to express their religious beliefs fueled by the "righteous jihad" fatwa on the one hand, and to meet their financial needs on the other. The "righteous jihad" is a fatwa issued by Shiite cleric Ali al-Sistani after the fall of Mosul on June 10, according to which people join the security forces, which lack members, in the fighting.

The Iraqi government is tasked with forming the National Guard, which is to include the volunteer armed forces that support the army in its fight against the Islamic State (IS), in a bid to impose security in the provinces.

When Hassan showed his friends, who are looking for similar jobs, the application form to volunteer with the National Guard, they were immediately interested. “Most of the young people in the popular mobilization will join the new forces,” Hassan told Al-Monitor.

Meanwhile, many people are wondering about the “feasibility” of these formations, and whether or not they will lead to the creation of more militias that would pave the way for dividing the country and fueling armed conflicts.

However, Mohammed al-Masoudi, a member of parliament for the National Alliance, told Al-Monitor, “By preventing terrorist elements from infiltrating into these formations, the specter of sectarianism remains absent. Otherwise, the National Guard would serve as an umbrella for armed conflicts.”

On Sept. 9, Iraq’s parliament decided to draft a law to establish the National Guard, which is directly linked to the prime minister and has no associations with the Interior and Defense ministries. Special committees in Iraqi cities have begun to implement the provisions of the new law to this effect.

There is no doubt that the enthusiasm of young Iraqi men to join the new fighting formations is met with lukewarm reactions from tribal and political parties and academic elites, who view this project as a step toward creating more militias in Iraq, and spawning “Sunni” forces in the western regions and “Shiite” forces in the center and south of the country.

In this context, during his visit to Baghdad, Abbas al-Moussawi, director of the Iraqi Center for Media and Public Relations in Beirut, told Al-Monitor: “The National Guard is still an unclear idea. All parties are trying to make this guard meet their interests.”

“Sunnis view the project as a step toward forming [a Sunni army], supportive of a future separatist project. Meanwhile, the Kurds hope that it would be a source of funding to finance the peshmerga forces. Shiites, on the other hand, are engaging in the project with fear that it could be a way to prolong the conflict and divide the country,” Moussawi said.

As for the supporters of the National Guard, they consider it to be an opportunity to get rid of “Shiite militias” by integrating them into the guard, and lure opposing Sunni groups to the government’s side.

Academic and political activist Hani Ashour told Al-Monitor, “The idea of establishing armies in governorates is in direct conflict with the Iraqi Constitution that defines the Iraqi army and determines its functions. The project of the National Guard in the provinces is only temporary and will come to an end when the circumstances that led to its inception no longer exist.”

Ashour said he calls for “efforts to rebuild the national army and eliminate its partisan and sectarian affiliations, and determine its duties set out by the constitution so as to include all Iraqis.”

Some, however, do not see this as something new. Iraqis had previously tried establishing the "Sahwa forces" in volatile Sunni areas.

Al-Monitor spoke with Sheikh Rafaa al-Janabi from the city of Latifiya, 35 kilometers (22 miles) south of Baghdad, which is still witnessing armed clashes between the army and militant groups. "Youth from the region joined the Sahwa forces that were formed in late 2005, and succeeded in establishing security. However, after the government abandoned its support for them, some members were led to join militant organizations," he said.

Yet, Janabi has found no reason to object to the new plan. "It will provide income for the youth as well as improve [their ability to use] the arms and ammunition in their hands, to fight any outside armed force seeking to take control of the clan's vital area," he said.

Jawad al-Shammari, the media director for the UNHCR in Iraq, told Al-Monitor, "The National Guard will have regional loyalties in each province, and Iraqi officials acknowledged this. Conscription is the best way to rebuild the army and get rid of militias."

Al-Monitor also spoke with Sheikh Hussein al-Yasiri from Yusufiyah, an area 25 kilometers (15.5 miles) south of Baghdad that is adjacent to the volatile Sunni-dominated "Baghdad belt" region. While Yasiri called for a "National Guard to contain the militias," he warned against including Sunnis from some areas of the Baghdad belt in the new formations, as this would cause clashes in regions with a Shiite majority. Yasiri fears that members involved in terrorism from the Baghdad belt might join the National Guard.

While waiting for "Sunni" and "Shiite" formations to be established, the biggest challenge to this project involves determining the quota of representation of each sect in the religiously mixed areas. However, according to writer and political analyst Nizar Haidar the issue will be subject to a political consensus before a vote in parliament. Haidar told Al-Monitor, "[Forming] National Guard forces is an inevitable choice, in light of the delicate circumstances facing Iraq because of the challenges of terrorism."

Writer and media editor Qassim Mozan told Al-Monitor that he questioned "the support of residents of the south for this project, to save their children from a devastating war."

He added, "The project stirs a political and security debate, given the possibility of terrorists joining [the National Guard forces]. This makes it similar to the experience of the Sahwa forces, which were infiltrated by extremist organizations and militias."