The Iraqi government is trying to revive the Awakening Movement — the Sahwa forces — among Sunni tribes to combat the rise in terrorism. 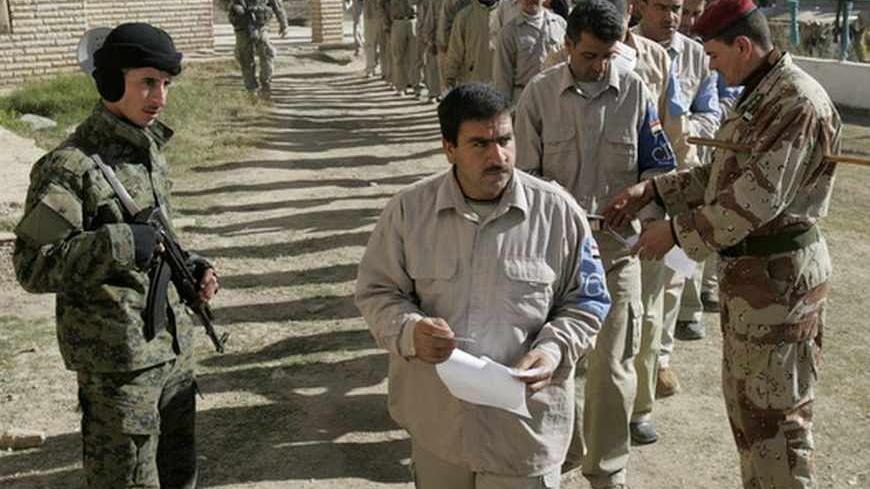 Members of a US-backed neighborhood patrol, known locally as the "Sahwa," wait in line to get their salaries from the Iraqi military at an Iraqi army camp in Taji, near Baghdad, Dec. 17, 2008. - REUTERS/Saad Shalash

The Iraqi government is inclined toward reviving the tribal Sahwa forces, established by the US military in 2006.

This move was an attempt to halt the deterioration of the security situation in Iraq to using the “specific opponent” theory, which contributed to the expulsion of al-Qaeda from Sunni regions in 2008.

Amer al-Khuzai, adviser to the Iraqi prime minister for national reconciliation affairs, affirmed, “The Sahwa forces have scored many victories against al-Qaeda. Based on this, we have thought about reforming them, especially given that [al-Qaeda] began to restore activities in light of [the eruption of] protests.

“The new forces will be more organized and will receive more training. They will include a specific age group, not exceeding 40 years of age,” Khuzai added.

This push is a response to the continuous worsening of the security situation and the bombing attacks that have targeted different Iraqi cities, indications that al-Qaeda has regained its influence and found a welcoming environment. Furthermore, it has acquired resources that allow the organization to carry out large operations quickly and efficiently.

At the end of 2006, the US military changed its strategy in Iraq in favor of transforming armed groups and tribal chiefs into organizations supported with money and arms, whose sole aim was fighting al-Qaeda in Sunni regions.

Iraqi security sources who requested anonymity affirmed to Al-Monitor that the calls made by security officials to tribal chiefs in Mosul to form new Sahwa forces have not yielded any tangible results.

Mosul is the only Sunni city in which US forces failed to form effective Sahwa forces similar to those established in Anbar in 2006 at the hands of Abdul Sattar Abu Risha. The leader of Iraqi Arab Sunni tribes, Risha was assassinated in September 2007 and replaced by his brother Ahmed Abu Risha.

In February 2013, the Iraqi government supported the re-election of the Sahwa forces' leader. Sheikh Wissam al-Hardan was favored over Ahmed Abu Risha, who backed the Sunni protests that have been ongoing in Sunni cities for about eight months.

Risha opposed the re-election as being “imposed by the government.” Risha’s stance can be seen part of the criteria for measuring the possibilities for success in reforming the Sahwa forces.

Tribal sources in Anbar told Al-Monitor that Hardan’s forces were not able to compete with Risha’s Sahwa forces, noting that the latter have been led by members of the Risha family ever since their formation.

The main factor that allows the new Sahwa forces to follow the lead of previous ones is the support of Sunnis who have been protesting against the government since late 2012. Sunnis have been accusing the government of discrimination, marginalization and conducting mass arrest campaigns against them.

On the other hand, Iraqi security and political circles note that al-Qaeda is once again attracting Sunni support after weakening the Sahwa forces. This has largely facilitated the escalation of al-Qaeda operations. In fact, Sahwa members themselves are accusing the government of mistreatment, even after they succeeded in constraining the activity of al-Qaeda.

Since 2008, key Sahwa leaders have been subject to prosecution, and Sahwa forces are being methodologically eradicated at the hands of al-Qaeda.

Abu al-Fawz al-Iraqi, a leading member of the Sahwa forces in Diyala, told Al-Monitor, “The Iraqi government has neglected the Sahwa forces and has subjected them to prosecution, some of which was due to information provided by imprisoned al-Qaeda elements.”

Iraqi affirmed, “The reformation of the Sahwa forces should be methodological and should come as part of strategic planning. This must include the release of imprisoned Sahwa men and the provision of military and financial support.”

The majority of the Sahwa forces, which numbered around 100,000 fighters at their peak, were granted monthly salaries not exceeding $300. In 2012, the Iraqi parliament, however, refused to allocate more to them, and their salaries were reduced by 20%. In the same year, Sahwa elements complained about plans fomented by al-Qaeda to eradicate them.

Ahmad Said, a leading member of the Sahwa forces in Yusufiyah, south of Baghdad, told Al-Monitor that only 16 Sahwa members out of 3,000 have remained in his city. Many of them were assassinated by al-Qaeda, while others moved away. Some of the Sahwa men, however, succeeded in assuming civil governmental posts.

The Iraqi government has launched a project to merge 20% of Sahwa members into the military and security forces, while providing the rest with civil jobs. The absence of allocations and the emergence of security complications in regard to the Sahwa project have led to the postponement of this process.

It could be said that in 2006, the Iraqi government did not rejoice when the US army established the Sahwa forces. Yet, since 2007, it has begun to feel the positive impact of this organization on the security situation. At the time, Prime Minister Nouri al-Maliki decided to move this project from Sunni to Shiite regions. The latter has formed what are known as Isnad councils to face Shiite militias in southern Iraq.

A former leading member of the Sahwa forces in Baghdad, who is also a former member of a Sunni armed group, noted on condition of anonymity that the restoration of the relationship between the Sahwa forces in Sunni regions and the government requires “an understanding of what happened in 2006, including the reasons why Sahwa succeeded.”

The leader, who had left the Adhamiyah Sahwa forces, told Al-Monitor that he attended — along with the leader of the Baghdad Sahwa, Abu Abed (formerly a member of the Islamic Army) — the majority of the meetings that were held with the US military in 2006 to form the Sahwa forces in al-Amiriya, west of the city, and then in Adhamiyah.

He continued, “The establishment of the Sahwa forces was a salvation for the residents from the horror they lived through under the thumb of al-Qaeda. The latter is effectively controlling many Sunni cities and is imposing its own lifestyle on them.”

He added, “There were signs of a big confrontation between Sunni armed groups, due to the fact that al-Qaeda insisted on imposing its own ways in managing military operations and carrying out mass murders against innocent residents. Al-Qaeda accused the residents of working for the US army or refraining from supporting the fighters. The situation was pointing at an unequal confrontation with al-Qaeda — the most organized and armed organization.

“Following tribal mediations, agreements were made with the US army to establish the Sahwa forces, whose main aim would be to fight al-Qaeda. The majority of Sunni fighters joined the project, which enjoyed wide popular support,” he added.

The leading member then said, “Nowadays, the situation is different. It is true that al-Qaeda is regaining its power and carrying out retaliation operations against the residents. The government, however, did not succeed in gaining the support of the Sunnis to form new Sahwa forces. This is why I expect the failure of the project, especially if it is directed against Sunni protests and not al-Qaeda.”

This last sentence is worth noting. Khuzai, the adviser to the prime minister for reconciliation affairs, stated, “Al-Qaeda has found its way to emerge through protests. This is why we decided on providing assistance for tribes in the tense areas, namely Mosul, Kirkuk, Diyala and Baghdad’s [surroundings].”

The Iraqi government wants to prove that its sole aim is confronting al-Qaeda and not Sunni protests. The first choice may lead to a new popular consensus over the Sahwa forces, while the second could usher in further security chaos.