As tribal leaders and other prominent Sunnis in Iraq defend themselves against accusations of supporting terrorism, sectarian tensions rise in Iraq, writes Ali Abel Sadah. 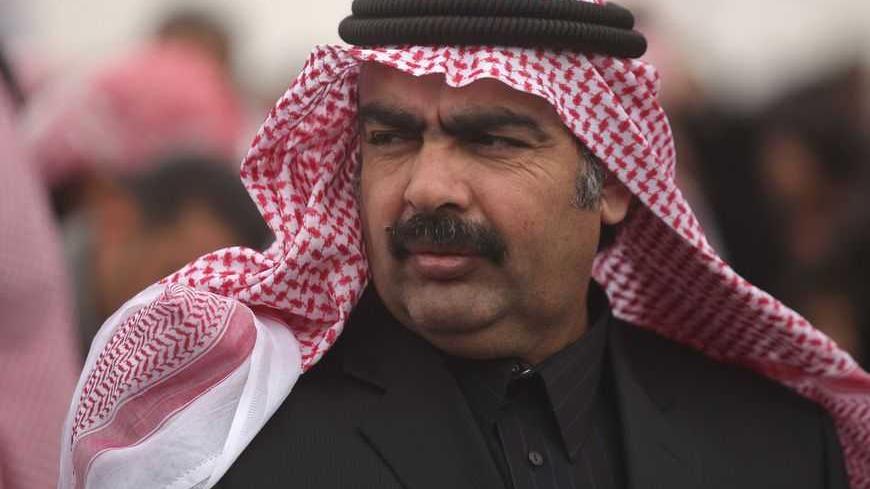 The Intelligence Directorate of the Babil province, south of Baghdad, revealed on March 9, 2013, the arrest of a cell made up of 12 al-Qaeda affiliated members in the province. According to the directorate, the elements of the cell admitted to having received support from both Ali Hatem al-Suleiman — the emir of the al-Dalim tribes — and the former leader of the al-Sahwa forces in Iraq.

Al-Dalim is a large tribe in Iraq, mostly made up of Sunnis. It has its origins in the Anbar province, with the young Sunni leader Suleiman as its emir.  Suleiman has sparked controversy in Iraq’s Sunni circles because of his caustic positions toward Iraqi Prime Minister Nouri al-Maliki’s government. He supported Maliki’s government from 2008 up until the 2010 elections, but then turned against it, accusing it of working for Iran. Suleiman is currently fiercely opposed to Maliki,  participating in the Sunni protests in the city of Ramadi (in Anbar province, west of Baghdad).

Ahmed Abu Risha is the former leader of the Sahwa Forces, which had fought al-Qaeda with the direct support and assistance of the U.S. Army since 2008. However, the conditions of Sahwa fighters deteriorated after the U.S. withdrew in 2011. Abu Risha subsequently accused the Maliki government of neglecting the Sahwa forces, not paying members’ salaries and not providing them with arms.

The security official said, "Members of the cell confessed to having received support from the emir of Al-Dalim tribes, Ali Hatem al-Suleiman, and the leader of the Iraqi Sahwa Movement, Ahmed Abu Risha.”

Iraqi political forces accused Maliki of controlling the intelligence agency to weed out his opponents. Maliki, however, repeatedly said in his public statements that the apparatus is operating according to professional and technical mechanisms and that he is not interfering in its work. He believes the accusations that he's favoring one side are an attempt to cover up crimes of organized terror.

According to the story told by the local intelligence officials, there are wanted suspects accused of carrying out terrorist acts who were working as mediators between them, Suleiman and Abu Risha. Meanwhile, explosives are being transferred to the province of Babil through the western desert that links the Anbar province to northern Babil.

Improvised explosive devices and car bombs have exploded in the center of the city of Babil. Military officials say they all come from the north of the province, which was formerly called the Sunni triangle and maintains close geographic and social ties to the rest of the province.

Abu Risha responded to the accusation made by the intelligence services, saying it was "very funny" and had been made under pressure following the request of the Iraqi government.

In a telephone conversation, Abu Risha said he “supports the country’s official army in the fight against al-Qaeda.” He continued, saying that “because of his opposition to al-Qaeda, he had lost 26 members of his family, nine of whom were from his own house and the rest were his brothers, his father and his cousins.”

“How could I support this organization?” he asked rhetorically.

Abu Risha said he did not expect the government to reach this level in its fight against its political opponents. He added that Maliki had previously accused him of implementing a foreign agenda and receiving foreign funding, and Maliki considered his support for protesters part of an electoral campaign.

It seems that Maliki chose to besiege his Sunni rivals, who have been protesting for months against his policies.

According to Iraqi politicians and officials, the outbreak of sectarian violence is possible. They believe that the accusations exchanged between Shiite and Sunni leaders about supporting terrorism could pave the way for a new and bloody situation similar to that which occurred between 2006 and 2008.