A truce proposal between Sunnis protesting in Anbar and the Iraqi government has been accepted by some Sunnis but rejected by others, reports Ali Abel Sadah. 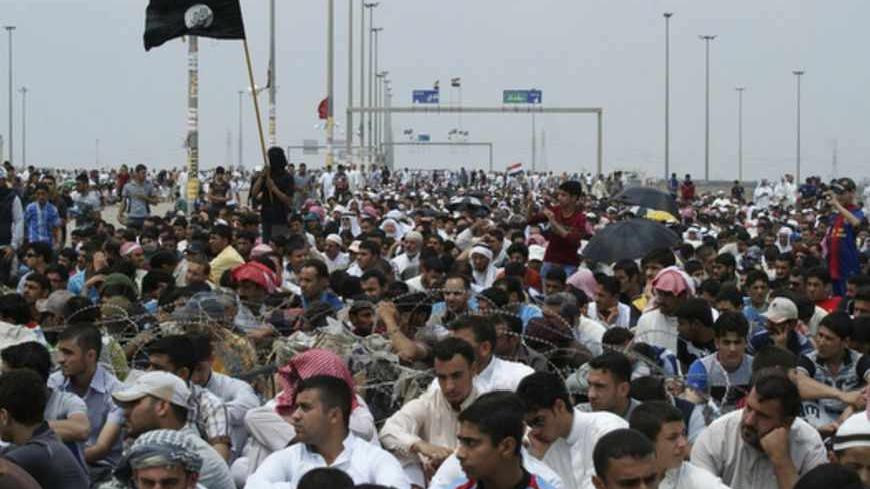 A leading figure of the recent sit-in protests in Anbar (west of Baghdad) revealed that Sunni politician and Deputy Prime Minister Saleh al-Mutlaq has been mediating with Prime Minister Nouri al-Maliki to calm things down. But this is causing sharp divisions among the participating groups of the sit-in.

The leader told Al-Monitor on condition of anonymity that “a meeting was held at a house of one the largest Sunni tribes in Ramadi. The meeting included many sit-in leaders as well as representatives of extremist Sunni parties to hear a proposal about how to resolve the crisis and reduce the possibility of sliding into military confrontations.”

Earlier, Mutlaq had withdrawn from the political process to protest the Hawija events. But after the provincial elections on April 20, he started efforts to bring the conflicting parties together. Mutlaq did not do well in the elections. The Arab Iraqiya Bloc, which he endorsed in 12 provinces, won only five seats in 12 districts: two seats in Salahuddin and three in Baghdad.

Before the meeting, which happened at the beginning of May, Anbar Gov. Qasim al-Fahdawi met with Mutlaq in Anbar in the presence of provincial council members. Local TV showed Mutlaq insisting on a “truce with the government” and on “taking a stand to remove armed appearances because they may lead to violence and perhaps a repeat of the Hawija incident.”

During Mutlaq’s meeting with leading figures at the so-called “Square of Glory and Dignity,” his talk of calming things down caused a rift within the Sunni forces at the protest. The leading figure, who attended the meeting, said that “Mutlaq’s talk did not convince the parties, which are still insisting on confronting Maliki to the end.”

According to this source, “Those parties’ choices do not agree with those of Mutlaq. They want to continue the sit-in and get rid of Maliki, even if it costs them dearly.”

That figure, who is among those who support the truce, said that those who attended the meeting hold widely divergent opinions, and some even represent armed groups.

But Mutlaq convinced another group of demonstrators to turn the talk about a truce into reality. The figure said that “the meeting with them ended with a preliminary understanding to prevent the possibility of fighting between protesters and the Iraqi army as a first step, and then to negotiate with Maliki.”

Some of the representatives of the protesters demanded that Maliki come to Ramadi to negotiate. Mutlaq convinced them that the idea was not feasible and that the ministerial committee led by Hussein al-Shahristani, a leading Shiite cleric and deputy prime minister for energy affairs, may visit instead.

The fear that fighting may break out between the protesters and the Iraqi army coincided with the arrival of regular army units to the vicinity of the sit-in and the formation of a Sunni “army” to fight the Maliki government.

Last April, a spokesman for the protesters in Ramadi, Said al-Laffi, announced in a statement that tens of thousands of worshipers in Ramadi would in the following 72 hours form an army for the tribes in Anbar and six provinces to defend the provinces from attack.

Elsewhere, acting Defense Minister Saadoun al-Dulaimi said that whoever forms an army in the sit-in area to fight the Iraqi army “will pay the price.”

Dulaimi was speaking at a memorial service for five soldiers killed in Anbar. He pointed out that the “protest squares have turned into incubators for terrorists, and we must put an end to them,” which was broadcasted on the state-funded Al-Iraqiya TV channel.

He said that the Defense Ministry “has begun transferring military personnel and equipment to Anbar province after information was received that a Syrian dam could collapse and cause harm among Anbar's people. But the killers confronted the [military] vehicles, burned them and killed the drivers.” He accused “foreign players of instigating the protesters at these squares. There are also politicians who defend them.”

He also revealed that a “conference held in Istanbul under the title The Iraqi Spring’ gathered more than 150 people from the Muslim world … It is strange that the conference was broadcast live on large screens at the sit-in squares.”