Sunni candidates in the upcoming Iraqi elections are being targeted in a recent spate of assassinations, reports Ali Abel Sadah. 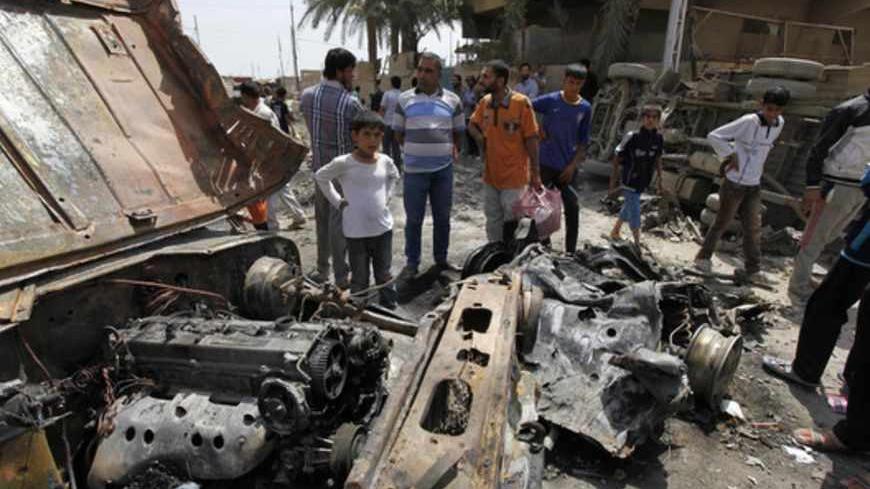 Residents gather at the site of a car bomb attack in the Kamaliya district in Baghdad, April 15, 2013. - REUTERS/Mohammed Ameen
Ali Abel Sadah
April 17, 2013

Death is haunting Sunni Iraqi candidates in their regions, and the killers are unknown in most cases.

Ever since the start of the electoral campaigns of the political blocs competing for seats in local councils, it has become clear that anything goes in the electoral race, including the assassination of candidates, according to Iraqi observers and politicians.

On April 14, 2013, about a week before the local elections, Sunni Iraqi politicians were assassinated in the cities of Diyala and Saladin.

In the city of Baqouba (in Diyala province, west of Baghdad) the candidate of the Iraqi Diyala list, Najem al-Harbi, was killed along with two of his brothers and his son in an ambush in the east of the city.

Harbi was going to run in the local elections as a candidate for the Dialogue Front led by Saleh al-Mutlaq, a political dissident of Ayad Allawi's bloc. He was arrested on charges of terrorism from February 2010 and imprisoned until August 2012, when he was released and returned to his work in the Council of Diyala.

Harbi received the highest number of votes during the parliamentary elections of 2010, and more than 35,000 people in Diyala voted for him during his stay in prison.

As Harbi breathed his last, another Sunni politician barely survived an assassination attempt when a roadside bomb exploded east of Baqouba, wounding two of his bodyguards.

The assassination campaigns that escalated in the last week before the elections were interpreted by National Dialogue Front leaders as having sectarian purposes. These leaders accused the State of Law coalition of involvement. Nahida Daini, one of the leaders of the National Dialogue Front, told Al-Monitor that “The assassination of Najm al-Harbi was a premeditated act ... there is a plan underway to change the demographic map of Diyala.”

In Saladin (near Tikrit, north of Baghdad), unidentified gunmen fired silenced guns from a car at Hatem Mohammed Sarhan, a Sunni candidate for the list of the al-Ensaf Front, led by Mishan al-Jubouri. This occurred while he was passing through the popular market in Baiji — 40 km [25 miles] north of Tikrit — and resulted in his immediate death.

A police officer in Baiji, speaking on the condition of anonymity, told Al-Monitor that “the the killing of Sarhan came three hours after the special army and police ballot was over.”

There is a common denominator between the assassination of candidates in Diyala and Saladin, namely that the two candidates' blocs are close to Prime Minister Nouri al-Maliki. According to leaks and local expectations in Iraq, Saleh al-Mutlaq and Jubouri will be partners with Maliki in a political majority government in 2014.

Mutlaq's split from the large Sunni bloc led by Allawi has angered the protesters, who have described him as a traitor and a collaborator in recent weeks.

The leaders of the National Dialogue Front, however, did not accuse their Sunni partners in the Iraqiya bloc and preferred to hint that Shiite factions were behind the spate of assassinations. There might be fears over the worsening security situation and the threat that will haunt candidates in the coming period. Moreover, accusing the State of Law relieves the massive Sunni pressure on dissident factions, as is the case with Mutlaq.

But the assassinations do not include those who have defected from the Iraqiya. Attacks center on candidates of the coalition of Osama al-Nujaifi, the speaker of parliament and one of the most prominent Sunni leaders who did not like the recent reconciliation of Mutlaq with Maliki.

In Fallujah, a city in Anbar province to the west of Baghdad, the convoy of Hamid Ahmed Hashem, a candidate on the Motahedon list, led by Nujaifi, was passing through the city center when an explosive device hit his convoy. He was not hurt, but his bodyguards were injured.

The security and political situation in Anbar is different from that in Diyala. The demonstrations and political transformations impose a different security equation, along with a clear activity of armed groups within al-Qaeda in Iraq. The elections in this city will not take place at the present time because of a government decision to postpone them.

The general picture of the local elections in the country is that Sunni politicians are fighting a contradictory and complicated experience, be they Maliki opponents or allies. There are different possibilities as to the identity of the killer or killers. The assassination of Maliki's Sunni allies may be carried out at the hands of armed groups opposed to Maliki. There might be even extremist Shiite factions tyring to trap Sunni candidates. There is another possibility according to which al-Qaeda factions might be cold-bloodedly executing them in order to foment disputes between Iraqi factions.

Regardless, the fact remains that the local Iraqi elections did not rule out murder as a weapon in the political competition for power.