While the Iraqi parliamentary elections scheduled for the end of this month approach, competition is fierce among Sunni blocs. 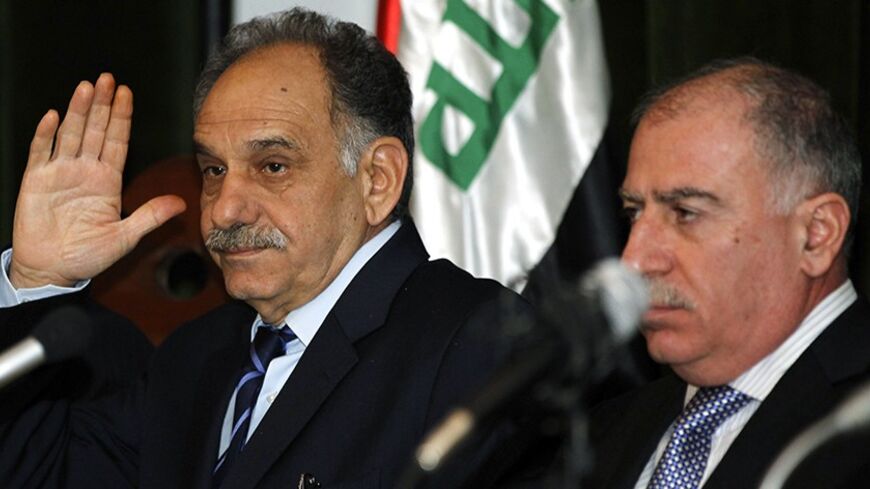 On April 12, Iraq’s Independent High Electoral Commission (IHEC) declared alternative plans for the success of the electoral process in mostly Sunni Anbar province. It is noteworthy that Anbar has seen military operations, and some of its districts are in the grip of the Islamic State of Iraq and al-Sham (ISIS). However, this announcement did not remove the doubts surrounding the possibility of holding elections there, the turnout of voters in polling centers and the ways to guarantee the transparency and integrity of the elections.

Still, the Sunni blocs and parties in the more secure regions went on to launch their electoral campaigns. Just like the situation in the mostly Shiite cities, the competition in the Sunni provinces is between traditional and new forces as well as the local parties. It seems that the coming elections will result in a divided Sunni political map, unlike the previous 2010 elections, when the overwhelming majority of Sunni voters voted for the Iraqiya List.

Five main coalitions will compete to win Sunni votes, but we cannot rule out surprise results that might be achieved by small or local parties. Three of these five coalitions, in fact, represent fragments of the Iraqiya List, which is no longer present in the elections. The Mutahidoun bloc, led by parliament speaker Osama al-Nujaifi, is the first of these coalitions. It consists of 13 parties and is seeking to appear as the biggest Sunni force after the elections. The second coalition is the Arabiya led by Deputy Prime Minister Saleh al-Mutlaq, and includes nine parties. Third, there is the Nationalist Coalition, led by Ayad Allawi, the former prime minister who was the leader of the Iraqiya List.

The Nationalist is one of the rare blocs that includes Sunni and Shiite members. Moreover, it is participating in the elections in all Arabic-speaking provinces. However, this coalition has poor chances because of intense sectarian polarization and Allawi’s loss of a large part of his traditional constituency, partly due to the emergence of a new liberal list called the Civil Democratic Alliance.

These coalitions will compete with each other and with two new groups that have emerged on the Sunni electoral scene. The first group, the Karama (Dignity) List, was formed by the prominent Sunni businessman Khamis Khanjar. He was considered the main funder of the Iraqiya List, which participated in the elections in 2010. Karama is more right wing than other Sunni forces, as it has taken a stricter stance toward Prime Minister Nouri al-Maliki’s government and considers itself the political heir of the wave of protests that went on for a whole year in the Sunni cities. Member of parliament Ahmad al-Alwani, who was arrested by Iraqi forces on the grounds of sectarian provocation at the end of December 2013, is one of the founding political leaders of the Karama List.

The fifth main group is the Coalition of Iraq, which was formed by another businessman, Fadel al-Dabbas. It is a new coalition that includes several technocrats and is competing in all Sunni and Shiite provinces. This coalition is the most moderate in its attitude toward the Maliki-led government compared to the remaining forces competing over the Sunni seats. It advocates a technocratic governance and a larger role for businessmen. It is widely believed that this coalition is seeking to ally with Maliki after the elections and that it represents the interests of some Sunni tribal and social leaders who are close to the prime minister, such as Sheikh Hamid al-Hayes.

All these forces are seeking to win the support of the Sunni majority, but some have specific geographic areas of influence. The main electoral constituency for the Mutahidoun bloc is in the city of Mosul, the largest Sunni city, from which hails the leader of the coalition and his brother, who is the city’s governor.

Nujaifi has sought to enter into alliances to expand his influence, especially in the Anbar province, where the Iraqi Awakening Conference, headed by Ahmed Abu Risha, is seen as one of the bloc’s founding groups.

Some of the bloc’s leaders and Abu Risha disagreed on certain issues, especially after Abu Risha had made a military alliance with the Iraqi government to confront ISIS. He has gone so far as to publicly criticize some of the coalition’s members, arguing that they failed to take tough stands against terrorism. However, it remains unclear whether or not this disagreement will continue after the elections, in light of the future stances of both sides.

The Arabiya Coalition has influence in the provinces of Saladin and Kirkuk, while its influence declined in Anbar where many think that Mutlaq has been compromised by Maliki. However, Mutlaq has been recently trying to change this perspective, by being harsher in his criticism of Maliki, as shown by an article he wrote for Foreign Policy on April 3.

Mutlaq represents the secular and pan-Arab inclination in Sunni policies, so he enjoys the support of Kirkuk, where the main conflict is between Arab Sunnis and Kurds. It seems that he tried to take advantage of the alliance between Kurds and Nujaifi, and to play the nationalist card in these areas, especially following his alliance with the controversial politician Meshan al-Jabouri.

Jabouri has been recently barred by the IHEC from participating in the elections because of his statements that were seen as inciting hatred against Kurds, but the electoral court, which many accuse of being influenced by the Maliki government, has annulled this decision and allowed him to participate. If anything, this insistence to keep Jabouri in the electoral race despite various accusations against him indicates how important it is to win every additional seat and perhaps a future anti-Kurdish alliance between Mutlaq and Maliki.

It seems that the Karama List considers Anbar to be its main constituency, and is seeking to take advantage of the growing feelings of resentment among Sunnis toward the Shiite-dominated government and the disappointment in the performance of Sunni politicians in the government and parliament.

Some Sunni hard-line clerics, such as Sheikh Abudllah al-Janabi — who is currently in Fallujah, which is not under government control — called for boycotting the elections, which reflects previous positions taken by more moderate clerics, such as Abdul-Malik al-Saadi. However, Ali Hatem, the sheikh of the Duleim tribes who is also the spokesman of the anti-government military revolutionary council, announced that if elections should be held, Sunni parties must agree on preventing Maliki from staying in power for a third time.

Finally, some coalitions are fielding candidates in only one province, focusing their efforts on gaining the support of local population. They may be able to win a number of seats at the expense of the larger Sunni blocs. Among these are the National Corrective Movement, led by the former governor of Anbar, Kamel al-Dulaimi; “Diyala is our identity,” which is a group close to Mutahidoun; and the National Coalition for Reformation in Saladin.